To relieve this week's text-heavy LPSC posts, here's a brief one on an incredible panorama across Saturn's northern storm, taken on February 26 by Cassini and assembled by unmannedspaceflight.com member "Astro0." Click to enlarge to see the mesmerizing detail of whirling storms, as intricate as anything you'd find on Jupiter.

In early 2011 Cassini took several high-resolution panoramas along the enormous storm that had developed in Saturn's northern hemisphere. This view was captured in an infrared wavelength in which Saturn's atmospheric methane is relatively transparent, yielding tremendous detail of the whorls making up Saturn's weather.

Here's a wide-angle view for context, taken a day earlier, so the details of the storm are not quite the same: 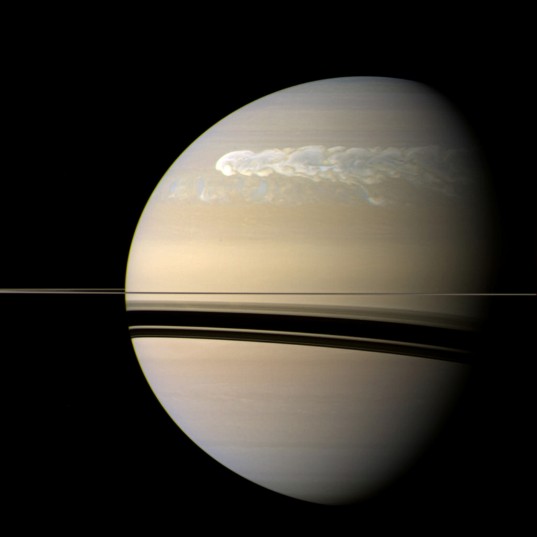 Cassini captured this approximately true-color view of Saturn with its enormous storm on 25 February 2011. The northern storm is obvious, but if you look below it you'll see a subtler band of whirling clouds.