Here's an image I've been meaning to post for months, a new mosaic from Voyager 1 by Ted Stryk. Voyager 1 watched Io cross Jupiter's terminator as it neared closest approach: 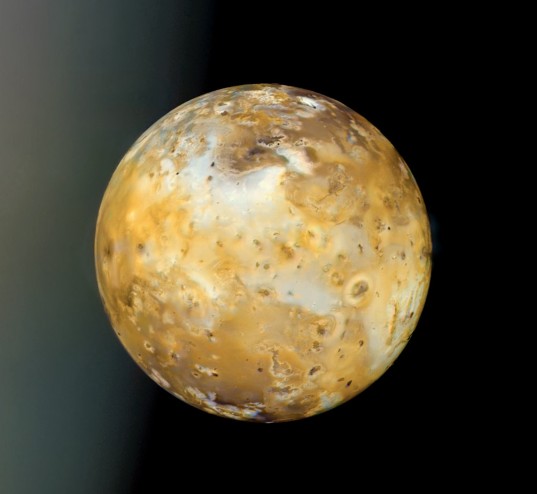 Viewed near the edge of its disk and at local dusk, only the uppermost blue hazes of Jupiter's atmosphere are visible. The mosaic, which consists of four clear-filter images followed by violet, blue, orange, and green frames, is a great challenge to assemble because in the 11 minutes it took Voyager to record and transmit the images (from 22:36:35 to 22:47:48) Io completely transited the terminator, making Jupiter appear to shift in the background, and because the color frames are not complete, with pieces of Io cut off. Ted had to pick one location for Jupiter and do a lot of cutting and pasting and aligning and filling in in order to make it appear as if Voyager took a single color snapshot. (It appears he chose this image to align everything else on, which makes sense since it's the one that contains the most of Jupiter's visible atmosphere.)

If you want to see what a challenging job this must have been, you can visit the Rings Node to see the images that Voyager 1 took during this observation.

Unrelated to this post: some of you may be wondering where my "What's Up" post for February is. It's not done yet; kids are home sick and I had less time than I planned. It'll get done as soon as I can get to it!