The next presentation at OPAG was given by Ralph Lorenz and Tom Spilker on a Titan Montgolfiere Mission Study. What's a Montgolfiere, you ask? Maybe you know but I didn't know that it's a hot-air balloon -- hot-air, that is, as opposed to lighter-than-air. In other words, they were describing a possible future mission to Titan in which you would inject a probe that would inflate a balloon with Titan's own atmosphere and then just heat it in order to establish neutral buoyancy. It's an intriguing combination of 21st-century space flight with century-old technology. 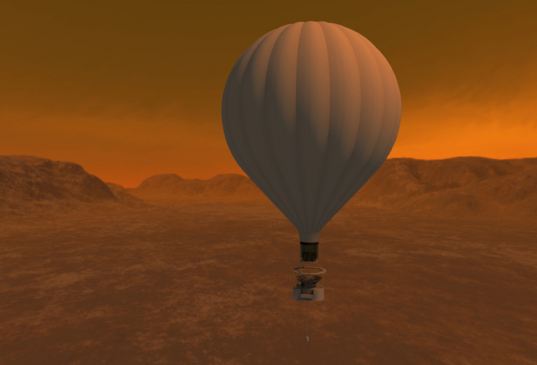 Ralph opened the presentation by showing a cute picture that Jonathan Lunine had put together, where he framed one of the side-looking Huygens descent panoramas inside an airplane window. "The airplane window view is what this is really all about," Ralph said. "With Huygens, we essentially had a 3-hour cross-country flight that was cloudy for most of it." A Titan Montgolfiere would give you the airplane window view of Titan for weeks, even months or longer.

"Titan is a very diverse world," Ralph said, "so we don't want to send either a lander or a rover." He showed several of the examples of interesting terrain visible from Cassini RADAR images, and pointed out that most topography on Titan is apparently slight, under a kilometer or so. "If you float a balloon at 2 or 3 kilometers, you're likely to be safely above everything." Furthermore, unlike a lighter-than-air balloon, which must vent limited gas to land and then drop limited ballast to rise, a hot-air balloon can drop simply by not continuing to heat its envelope, then rise by heating it again. Of course you need a heat source, which typically requires the burning of a limited supply of fuel, but the Titan Montgolfiere would use a radioisotope heat source and thus wold be able to go up and down, even sampling the surface for in situ studies.

Ralph outlined a possible intrument package for the Montgolfiere's gondola (how quaint!): a subsurface sounder; a near-infrared spectrometer; a tunable laser spectrometer; a sonic anemometer; imaging cameras; a pressure/temperature sensor; a gas chromatograph mass spectrometer; and a surface sample analysis package. That package could include a sample acquisition mechanism; another gas chromatograph mass spectrometer; an age dating package; a surface hardness instrument; a sample context imager; a sample microscope imager; and an elemental analysis package. "Age dating," Ralph said, "is a throwaway remark. In Titan's atmosphere, you would produce radioactive carbon as you do on Earth, so we may be able to identify how fresh the aerosol deposits are." The whole thing would be topped with a steerable high-gain antenna that would be capable both of direct-to-Earth communication and, more importantly, relay to a small orbiter. The relay orbiter could also carry a radar imager/altimeter; a near-infrared imaging spectrometer; and radio science.

Ralph gave the floor to Tom Spilker to talk more about the nitty gritty details of how a Montgolfiere mission would work. "For a first mission going to the detailed study of Titan, the Montgolfiere is the optimal way of handling that mission. Titan is ideally suited for an aerial vehicle. Titan has a large scale height," -- scale height is a term that atmospheric scientists use to describe how rapidly the density of an atmosphere goes down with increasing altitude, and Titan has the largest scale height of any planetary atmosphere -- "and because of that you can get a soft entry into the atmosphere. It's the easiest place in the solar system for aerocapture." Aerocapture is kind of like daredevil aerobraking. Instead of aerobraking -- which Mars orbiters have used (and are using) to brake slowly into Mars orbit by gently dipping into the topmost part of the atmosphere, aerocapture involves a single dive into a much denser part of the atmosphere. It's never been used in an actual mission, but other presenters at this meeting said that the theory was ready and was just waiting for a technological demonstration.

Tom continued: "Titan has high-density, high-molecular-weight, low-temperature air. Below 10 and 20 kilometers, the winds are low-speed and prograde." That is, the global wind patterns generally follow the direction of Titan's rotation. "Below 10 kilometers, winds are retrograde at times. This allows you the flexibility of drifting in one direction for a while," eastward, or prograde, "going down and drifting back toward an interesting target" to sample it. "The most promising implementation is a hot-air balloon, which rides the wind at about 10 kilometers, jetliner altitudes, where the winds move slowly enough that you can make decisions to, if something really looks interesting, make a decision to go down and look at things. So far, with the RADAR, wherever we've looked, we find multiple interesting things in there. We think it will not be a problem to find interesting things to look at. We're looking at imaging at 1-meter resolution" from that 10-kilometer altitude.

So how are they going to get a balloon deployed on Titan? "We've verified that with reasonable entry devices, we can put out the device necessary to deploy a balloon. There is enough time and enough energy to inflate and stabilize a balloon at a decent altitude and go on an exploration program that includes landings. We are not breaking new ground with deploying balloon from parachute; it has been done on Earth.

"The first thing we do is establish the direct-to-Earth link, look around, and establish our bearings. We do that by beginning imaging, and do image-based navigation. The first landing site is a contingency sample. You want to make sure that the first data that you get back is interesting, so you want to bias the entry point to one of these interesting spots. (Ganesa, Xanadu, or Huygens site, for example)."

When could we go? "Using chemical rockets, about 3 years of every Jupiter synodic period (which is about 14 years) gives you a gravity assist window. Solar electric propulsion widens that a bit. The aerobot would have direct entry; because of the large scale height you can go almost straight down, which gives you a lot of targeting flexibility. The orbiter requires aerocapture. Aerocapture hasn't been demonstrated yet; we're waiting for an opportunity, it's on the threshold, waiting for demonstration."

Tom went through a few simulations that showed how the balloon might drift across Titan during its mission. It turns out that the wind models for Titan agree with each other in the higher-up parts of the atmosphere, and they agree with the Huygens descent up to a point, but at the lower reaches of the atmosphere where the balloon would reside, they actually diverge quite a lot; one model has the winds going prograde pretty much all the time, the other has them switching to retrograde once each Titan day because of tidal effects. Both would see the balloon drift northward and southward a little bit with each Titan day, ending up covering I guess about 15 or 20 degrees of latitude and all 360 degrees of longitude.

One of the biggest challenges to this mission would be relaying the data to Earth. The balloon "would have direct-to-Earth capability, but the time-averaged data rate would be only 1 to 2 percent of the total data volume." The rest would be returned by the orbiting relay satellite. "With a 180-day aerobot mission, you would get about a Terabit back, about 5,000 times Huygens, similar to Mars Global Surveyor and Odyssey. You could have a 5-year orbiter mission -- that should last quite a bit longer than the aerobot. Depending on the orientation of the orbit, data latency can be considerable." Data latency means how long it would take from the time that the aerobot captured the data to when it was able to be returned to Earth. "It can be many hours to a week. Contact times would be 50 minutes maximum, brief pulses of very high data rate. In fact, the science data acquisition capability far exceeds the downlink capacity, so autonomy is going to be important. You prioritize reduced data for downlinking. You do classification and compression and manage storage for downlink schedule. You produce higher-level products onboard. You also use autonomy to drive a landing."

Tom explained that a "landing" would not actually involve touching the whole gondola to the surface. "'Landing' means winching down a payload from a gondola, 50 to 100 meters below the gondola. We've flown these at Earth before."

There were many questions from the audience. One asked how much power would be needed to heat the balloon. "We need 2,000 Watts to fly a vehicle like we describe here," Tom replied -- an answer that got a low whistle from the audience. But, he clarified, "This is not electrical output, it's heat output. You'd only need a single MMRTG." Radioisotope thermal generators generate electricity for a spacecraft from the heat created from the radioactive decay of plutonium. Current RTGs are actually not very good at turning the generated heat into electricity; they only have a few percent efficiency, and only produce tens of Watts in electrical output. But the balloon wouldn't need the heat converted into electricity -- it can use all the power present in the raw heat output, so 2,000 Watts is not a crazy number.

Another question had to do with the readiness of the technology. Tom answered, "the mission concept is achievable with further maturation of current technologies. Some are currently in process -- for example, the MMRTG on the balloon. That needs to be taken fully to completion. This is feasible; the next step is significant pre-phase A studies."

Kevin Baines asked whether there is really time to deploy, inflate, and heat a balloon during a ballistic entry into Titan's atmosphere. Tom: "Yes. It turns out it's easily doable. You don't deploy and heat in 15 seconds; it takes 2 or 3 hours. It takes minutes to deploy, but several hours to heat; you descend 30 kilometers while you're heating." Recall that it took roughly two hours for Huygens to descend to the surface under a parachute.

Another person asked whether precipitation is an issue, and to this question, Tom and Ralph had to say yes. "Precipitation" of course means rain, or worse, snow, methane rain or snow. Ralph said, "During certain seasons, there are certain latitudes we will want to avoid. Raining on a Montgolfiere is not a good idea. Another thing that is not a good idea is icing. If you get up above 17 kilometers you run into problems with icing. We haven't solved problem of rain, but there are tacks you can take that show promise."

This proposed mission is still somewhat in the "pie-in-the-sky" stages, but it sounds ready for more detailed study. Balloons have been suggested for exploring lots of places in the solar system, and the Russians used them with success on Venus. I'd love to see a balloon mission to Titan happen.

One final note about this presentation -- throughout the rest of the meeting, it seemed that people who didn't want to call it the "Titan Montgolfiere" took to calling it "Ralph's balloon" instead, and finally, yesterday, Ralph had to interject "It's not my balloon!"