Not all is well with the future of Mars exploration

NASA’s robotic Mars Exploration Program is on a troubling path of decline—and decisions must be made now in order to stop it.

This is the conclusion my colleague Jason Callahan and I reached as we prepared a new report for The Planetary Society: Mars in Retrograde: A Pathway to Restoring NASA’s Mars Exploration Program (pdf). I urge you to download it and read it yourself.

Since its formation in the year 2000, the Mars Exploration Program has systematically worked to understand the Red Planet through robotic missions of exploration. It realized a revolution in humanity’s knowledge of Mars, and methodically worked toward the top goal of Mars science—sample return to Earth—a goal which could advance our search for life and reveal untold secrets into Mars’ ancient past.

But we found a fundamental contradiction in NASA’s extant Mars plans: there is not much of a program within the Mars Exploration Program.

Currently, NASA has a single mission development—the Mars 2020 rover (InSight, which launches in 2018, is part of the Discovery program). There have been no new mission starts for Mars since 2013, one of the longest droughts in recent history.

But the existing Mars missions are aging and won’t last forever. A new orbiter is badly needed to relay high-speed communications with ground missions and to provide high resolution mapping of the surface to support landing attempts by NASA and others (not to mention provide important science). Yet the latest budget release for 2018 contained no new start for this critical mission. 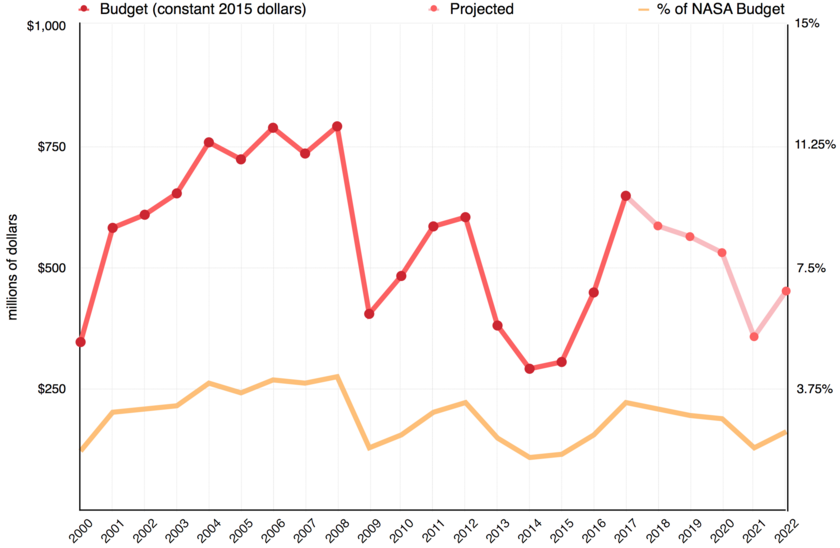 Left axis: the MEP budget, adjusted for inflation, since the start of the program. Right axis: the MEP as a percentage of NASA’s total budget. Values from 2000 to 2016 are “actual” amounts spent, 2017 is the “enacted” amount, and values after 2017 are projections from the President’s FY 2018 budget request. Note the two large cuts in FYs 2009 and 2013. These occurred after a cost overrun on the MSL mission in 2009 and as a consequence of the sequestration legislation in Congress and a decline of planetary science as a priority for NASA more generally.

We also provide straightforward budget analysis for three potential robotic Mars programs going forward: (1) Mars sample return in the 2020s, (2) sample return in the 2030s, and (3) an infrastructure-only program that indefinitely delays sample return and only provides a replacement a data relay communications orbiter. By analyzing the three options and comparing them to the current funding projections we conclude that NASA is currently pursuing option #3—infrastructure only. This is a significant change in priority for the Mars program at NASA and substantially different than the past two decades of NASA policy.

Comparing the annual Mars Exploration Program budget necessary to accommodate the options as outlined in the Society's "Mars in Retrograde" paper to the actual notional budget for the program as proposed within the White House’s FY 2018 budget request. Current budget projections most closely match the “infrastructure and deferred sample return” option.

We must be honest about what’s happening: NASA claims it's on a Journey to Mars, yet it cannot immediately invest in even the most basic infrastructure at the Red Planet, much less commit to achieving the top scientific goals for a program it has spent the last twenty years building from the ground-up.

We are at a key decision point. Congress, the new Administration, and NASA must make a conscious choice about the future of the robotic Mars program. We must start a new orbiter mission now or risk missing the 2022 launch window. We must start working on a way to return the samples that will be prepared by the 2020 rover or allow them to waste away on the surface of Mars. We must ensure that human exploration missions have the data needed to safely land and produce resources to sustain our astronauts.

The Planetary Society will work to support Mars exploration. The report is the first step.

Thanks Casey, smart analysis. Unfortunately the entire NASA planetary program is suffering from long running underfunding. This can be seen all across the mission spectrum. The Discovery program will have only launched two missions in this decade compared to six last decade. The New Frontiers program is slipping from two missions per decade and Europa Clipper is the first new Outer Planets Flagship in over 20 years or since Cassini was launched in October 1997. We all hope this situation improves since all categories of planetary exploration deserve more resources.

"Currently, NASA has a single {Mars Exploration Program] mission [in] development—the Mars 2020 rover.... There have been no new mission starts for Mars since 2013, one of the longest droughts in recent history." That is hardly unexpected. NASA made it clear some years ago it had its sights set on a 3-mission sample return as the next cab off the rank for its Mars program. There was no Plan B. And while it did try to squeeze the first leg of that trio of missions into the 2020 one the reality seems to be that the other two parts of that sample return will not be happening any time soon. Not unless Congress coughs up the money, which at this stage seems unlikely. Not when so many other parts of the US federal government (apart from Defense) are being asked to cut back,

"NASA’s robotic Mars Exploration Program is on a troubling path of decline" -- It should be. There are other places in need of robotic exploration, other places where we have more to learn.