One of its main scientific instruments could not maintain a vacuum

InSight, NASA's upcoming mission to measure the internal geophysical properties of Mars, will miss its launch window in 2016 due to a hardware problem in a science instrument provided by the French space agency.

Since launch windows to Mars open every 26 months, the earliest InSight can now launch will be mid-2018—a delay of over two years. It is too early to tell what impact this delay will have on InSight's budget, or on the number of new small-class missions NASA can select in 2016. There will be costs associated with storing the spacecraft and maintaining the associated workforce and science team for the next two years that could crowd out a new mission.

The instrument in question, the Seismic Experiment for Interior Structure (SEIS), was one of the two main scientific instruments on InSight. It is designed to measure very small amounts of seismic activity on Mars in order to determine the inner structure of the planet. To achieve the sensitivity required for these minute measurements, the instrument must operate in a near vacuum at a pressure of no more than 1/1000 of a millibar—about one millionth the sea-level atmospheric pressure on Earth. 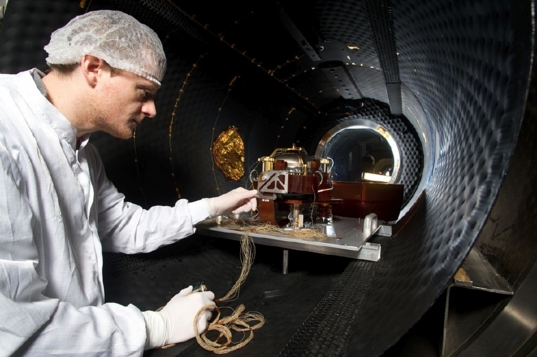 Preparation of SEIS instrument qualification model to a degasing test in CNES Toulouse facility before the delivery to Lookheed Martin in Denver, March 10, 2015.

While the instrument itself was working perfectly, the problem was maintaining the vacuum. "Since last August we've been fighting a series of leaks," said said John Grunsfeld, Associate Administrator of NASA's Science Mission Directorate. These were fixed, but yesterday during final thermal testing, "we found that it is still leaking. With this leak rate, [the instrument] would not work at all."

SEIS would provide the data needed to address a top science goal of the mission. There wasn't enough time to fix the underlying issues before launch. So if it wasn't ready, the mission wasn't ready. The spacecraft will have to be put into storage for the time being, and the team will now evaluate their options going forward.

InSight is a Discovery mission, which is NASA's small-class, competed mission program. In 2012, InSight was selected by NASA over two other small mission concepts: the Titan Mare Explorer, which would have landed a boat on a methane sea of Titan, and a comet-hopping spacecraft called CHopper.

The total cost of Discovery missions are capped. For InSight, the total budget, which includes the cost of the rocket, design, assembly, two years of operations, and data processing, is $675 million. Jim Green, the Director of NASA's Planetary Science Division stated that, so far, the InSight project has spent $525 million of that total amount. If the cost of storing and maintaining InSight are significantly above the planned budget for the project, it is possible that the mission will be cancelled. "It's on the table," said Grunsfeld. 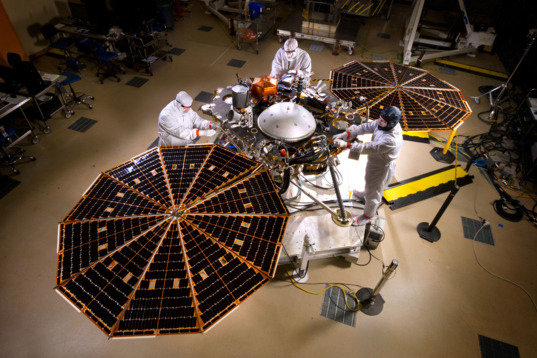 But don't panic yet. Unlike the Mars Curiosity rover, which infamously missed its 2009 launch window and added hundreds of millions of dollars to its cost, InSight's instrument problems are the responsibility of an international partner. NASA's costs associated with InSight's delay will likely be much lower than Curiosity, which required a much larger team to troubleshoot a variety of hardware issues. I also would be very surprised if NASA walks away from a nearly-complete Mars spacecraft.

But this is speculation. Even John Grunsfeld doesn't know the answers yet. More work will be done early next year to better understand the implications of this delay.

There is a bright side of today's delay: NASA and CNES found this problem while the spacecraft was still on Earth. There's not exactly a lot of experienced engineers on the surface of Mars able to fix a problem such as this. If this hadn't been found, and the mission had launched on time, NASA would have landed a spacecraft that would fail one of its major science goals. This problem can still (theoretically) be fixed.

Another bright side is that, assuming this mission will continue, we will see a NASA planetary launch in 2018. We will have something to look forward to during the otherwise barren years for NASA's planetary program between the launch of OSIRIS-REx (Fall 2016) and the Mars 2020 rover (Fall 2020).

This is a bitter pill to swallow right after the great news for NASA's budget in 2016. We'll know more in a few months, but until then, it's good to keep some perspective. ESA will launch to Mars in March with its Trace Gas Orbiter. In September, NASA's OSIRIS-REx mission will launch to an asteroid. Juno orbits Jupiter in the Summer. As for InSight? Bruce Banerdt, the principal investigator on the mission summed it up: "I'm a patient man. I've been working on this for 25 years, this is a minor setback, not a disaster."

Thanks for this update to what i saw in the regular news media.