The Sorry State of Planetary Science Funding In One Chart

We've talked a lot at The Planetary Society about our strong desire to fund NASA's Planetary Science Division at $1.5 billion per year. This number doesn't come out of nowhere. It's the historical average for the program that has produced the current golden age we find ourselves living in today.

Over the summer our policy intern Lori Dajose and myself explored the recent history of planetary science funding at NASA. We went through ten years of public budgets, picked out the funding for planetary exploration, and corrected it for inflation and made it programmatically consistent. Michael Wong of Caltech helped us visualize the results you see below, which speak for themselves.

Amounts are in millions, and are plotted against the number of missions in development in the President's annual budget request. 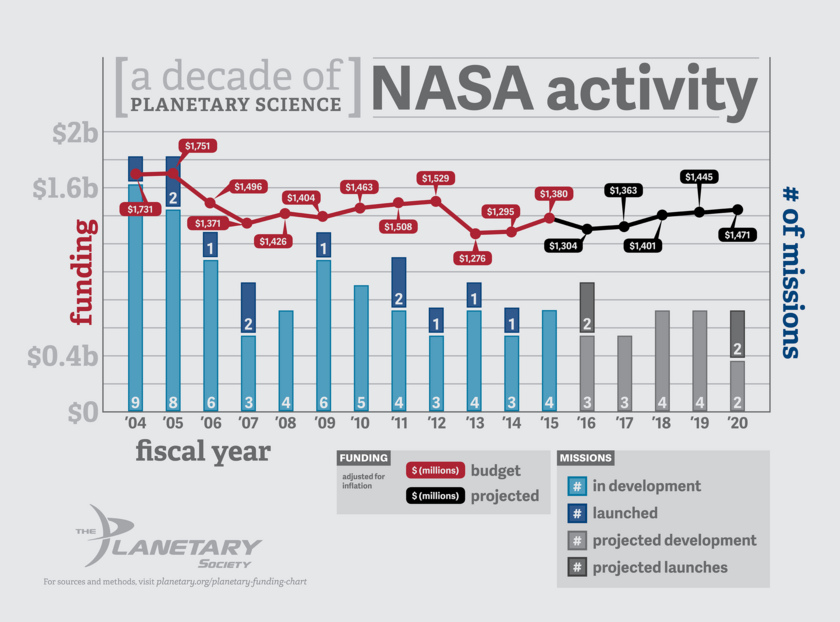 A few things to note about this chart:

If you don't like the trend displayed above, do something about it. Write the President and your elected officials and tell them to fund planetary science at NASA.

Casey, I can see how a 0-2bn scale would make it very hard to fit all this information. However, given that the incomplete y-axis is a classic and common feature of misleading graphs, perhaps more could be done to clarify. A numeric scale on the y-axis would help a lot, even if it had only the min and max. Otherwise it is an impressive, if daunting graphic.

Word is getting out that a 2014 Federal budget may pass very soon - before holiday recess. Republicans are willing to avoid another drawn out fight. Between the House and Senate, where does the NASA budget ($$$) stand right now? Time is running out to see any significant change in the total funding. Where (committee) and when can adjustments be made to the Planetary funding level in NASA's allotment? Also, when is P.S. going to speak out about H.R. 3625? The situation is too dire now for Planetary Science to remain silent and allow HEOMD to leave the rest of the agency bankrupt. Asking for $1.5B and disregarding the trouble with SLS and Orion is burying one's head in the sand.

Ethan: I've received multiple comments about this and I have requested an updated graph from our designer. To me, the point was always to clearly map the drop in funding to the drop in missions, and the scale we chose was intended to emphasize the link between the two. We've provided the numbers on the plot, and link to the raw data and explain our methods. Nevertheless, we'll make sure to publish a chart with a $0 - $2,000M scale. I'll link to it here when it's ready. Thanks for the feedback.

Tim: We're following that closely and have been in contact with key members of Congress. The two funding bills for NASA remain to be sorted out, but both the Senate and House side restore some funding for Planetary (to $1.3B). We're strongly encouraging Congress to pass an omnibus spending bill by Jan 15th, but it remains to be seen if they can first agree to a top-level amount for discretionary spending. Regarding HR3625, I'll be writing about that later today.

Since when in anyone in their right mind claim we are living in some "golden age"? That was during Apollo. The last 30 years have been a pathetic joke. Still wondering where that Mars mission we were promised is..oh that's right, forgot about that little costly mistake called the STS program getting in the way...

@Ethan Walker / @Casey Dreier: When I saw the graph, I thought: "Oh my, the budget for planetary science drops to almost zero!". But then I looked at the numbers and thought: "What a crooked piece of propaganda!" Making an honest graph is good idea – I look forward to an improved version!

Casey, thanks for doing all this research and publishing it here. It seems to verify my suspicion that in all the years of lobbying Congress, we have been successful - but I wonder if our efforts have been misdirected. It seems Congress is not the enemy; The White House is the enemy, at least in the President's 2nd term. I'm left wondering, "What happened?" What changed between the 1st and 2nd term that turned the White House so hostile to planetary exploration? New management at OMB? New staff in the White House? New orders from the top? In short, just how did we get into this mess?

"Everything is linear if plotted log-log with a fat magic marker." - Mar’s Law And again - the calls to increase SMD and specifically planetary science funding will not be considered constructive until some realistic proposals on where the increase should come from are put forth. So who is your target - HEOMD or something else ?

I plotted number of missions in development against the funding and did a linear regression. The line crosses the axis around $900M, so you can argue that the x-axis isn't badly placed (though I agree that the advertising industry has conditioned us all to equate a non-zero axis with dishonesty). $1bn is only a little bit more than is needed to just fail to launch any missions at all. reader - I can think of no quicker way to get the community to fall out among themselves than to take a position on where the increase should come from.

Your data looks pretty accurate, except that in FY03-05 I think you probably neglected to back out Corporate G&A and Center G&A, two categories of cost that are not part of PS budgets after FY05. If you do that, which you should for comparability, it would bring those years down to around the $1.5B level. Otherwise good stuff.

Thanks for encouraging space exploration funding. I'm wondering if your funding sources include Congressional earmarks, and if earmarks have in fact provided funding for NASA projects, can you address this please? Thank you. http://www.tauzero.aero/wp-content/uploads/2012/09/graphic-NASA-budget-chart.jpg