Planetfest 2012 Was a Huge Success

Planetfest 2012 ended in the best possible way: the Curiosity rover touched down safely on the surface of Mars. In our ballroom, almost two thousand people leapt to their feet and provided thunderous applause to accompany the joyous celebration at mission control. 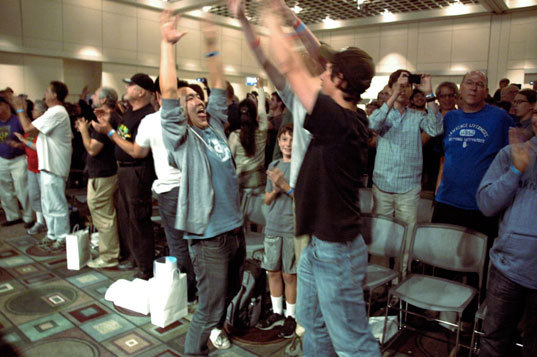 It was the perfect finish to a weekend of extraordinary presentations by the world's foremost authorities on Mars, space exploration, engineering, and outreach. We had surprise visits by the likes of NASA Administrator Charles Bolden, astronaut and Hubble repairman John Grunsfeld, Cosmos writer Ann Druyan, and (New) Cosmos Producer Seth MacFarlane. Two full-size spacecraft joined us as well, the Dragonrider Commercial Crew Vehicle, and the XCOR Lynx suborbital vehicle. The Dragon was too big to fit into the convention center, and had had to sit outside, where it attracted a constant stream of visitors and curious passers-by.

Bill Nye, The Science and Planetary Guy, pulled out his old lab coat and, along with actor Robert Picardo, gave the audience an important lesson about the effects of liquid nitrogen on marshmallows. He also managed to work in the concept of air vortices to give a sense of what MSL would have to deal with entering the Martian atmosphere. 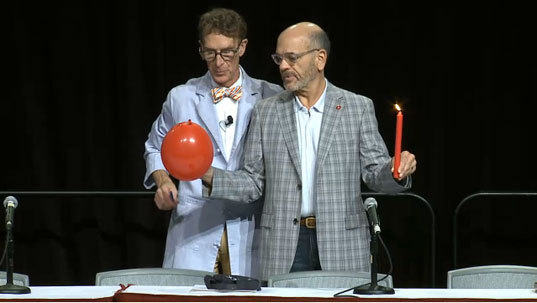 Saturday night welcomed a crowd of almost one thousand to the warm outdoor air of Southern California at Pasadena’s Paseo Colorado where The Planetary Society threw a Celebrate Curiosity party. A DJ and lightning speakers provided audible stimulation, while “astronaut mojitos,” free LEDs, and conversation provided the rest.

On Sunday we had over 45 other Planetfest-themed events around the world, including major events in Toronto and Atlanta. We managed to Skype chat with Toronto and one in Melbourne, Australia. Our live feed (when it worked) went out to additional thousands on both days.

Of course, the big event was the landing of MSL Curiosity on Sunday night. The audience of thousands sat in tense silence as the time inched closer to the beginning of the entry, descent, and landing procedure. The silence was not long-lived, as cheers from the crowd erupted at every major event: parachute deploy, heat-shield separation, powered flight, and skycrane. The announcement of touchdown prompted an outpouring of joy that will burn itself into the memory of everyone in the room. It was really something special to be there.

Planetfest 2012 was a success due to the extremely hard work of every employee of The Planetary Society. We’re not that many, and to throw an event of this magnitude required many long days (and nights) of organization and planning. We also had great help from our contractors, especially Liam Kennedy of ImageBeam, who produced the video stream, and the BlackStarr Group for helping us out with the party.

My biggest thanks are saved for last, as we were fortunate enough to have dozens of great volunteers everything progress smoothly. We here at The Planetary Society cannot thank them enough for their help and dedication. They were instrumental in making Planetfest 2012 a success.

Most of Planetfest 2012 is available for streaming at the Planetfest Livestream Event Page. We'll post individual talks on our YouTube channel over the next few weeks.

And now, as Bill Nye would say, onwards and upwards to the next big event, but not before a few days of rest. Curiosity is on the march, and we need to let that fact sink in.