This update is from Bob Stephens, a 2013 Shoemaker NEO Grant winner at the Center for Solar System Studies (CS3) in Landers, California. 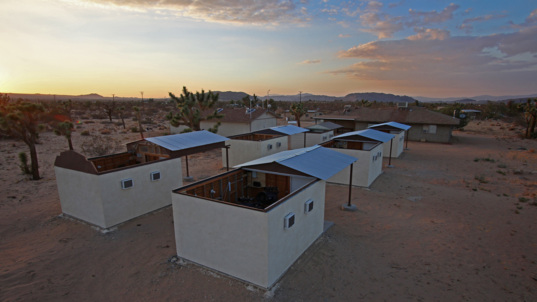 Observatories at the Center for Solar System Studies

The observatories at the Center for Solar System Studies (CS3) in Landers, California.

The Shoemaker NEO Grant enabled purchase of a new Finger Lakes CCD camera for a 0.4 meter telescope. The new camera enables precise measurements as well as greatly extending the nights of use of the telescope. 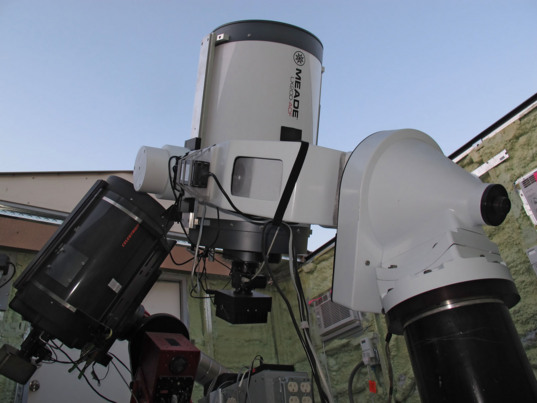 A 2013 Planetary Society Shoemaker NEO Grant allowed the purchase of a Finger Lakes Instruments Proline CCD camera (black box “underneath” the white telescope) mounted on a 0.4-meter telescope at the Center for Solar Systems Studies. It takes images of asteroids every clear night.

Here's what Bob had to say about his latest activities, including amazing statistics on number of nights observed:

The FLI Proline 1001e camera funded by a Shoemaker NEO grant is installed on a 16-inch Meade telescope at the Center for Solar System Studies (CS3) in Landers, California (north of Joshua Tree National Park). Since the camera was installed in April 2013, it has observed on 501 nights (as of November 25, 2014) representing 83% of all nights. So far in 2014, it has observed for 270 nights. This efficiency is achieved because the telescopes at CS3 are remotely controlled robotic telescopes which are controlled from anywhere there is an Internet connection. Although I usually control the telescopes from my home about 100 miles away, I have also observed asteroids from Chile, London, Paris, Amsterdam, Nairobi, Kampala and Helsinki.

This telescope and camera supports the Near-Earth Asteroid Program at CS3. In a poster paper presented in November 2014 at the Division of Planetary Sciences meeting in Tucson, we noted that CS3 observed 82% of all NEA lightcurves published from May 2013 to October 2014. During that period all of the telescopes at CS3 measured 196 lightcurves of NEAs. Of those 15 were binaries, 13 were tumblers, 5 superfast rotators and 9 slow rotators. The telescopes at CS3 work closely with the radar teams at Arecibo and Goldstone supporting their observing programs.

A couple times a year the FLI camera is used to work on Jupiter Trojan asteroids. A poster paper on the Trojan studies was presented at the Asteroids, Comets, Meteors conference in Helsinki, Finland in July 2014 and a paper in Icarus is under review. 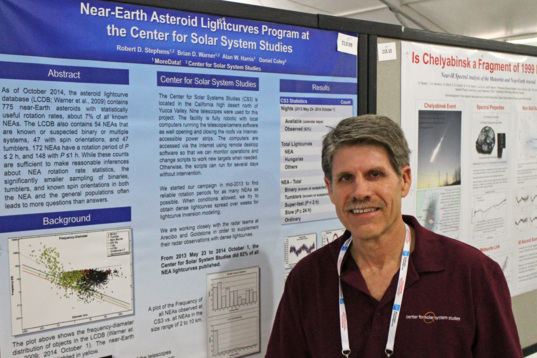