Congratulations to the 2013 Gene Shoemaker Near Earth Object Grant winners: 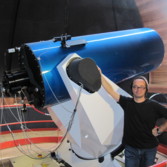 Albino Carbognani, Astronomical Observatory of the Autonomous Region of the Aosta Valley, in the Italian Alps is awarded $9,120 for improvements to their 0.81 meter telescope.  With the award, they will re-aluminize their mirror allowing them to reach dimmer than 21st magnitude objects, and they will acquire and install a focal reducer that will increase the field of view of the telescope, allowing a larger patch of sky to be observed at any one time.  The telescope will be used for astrometric follow-up including for the upcoming ESA Gaia mission, and also for physical studies of asteroids. 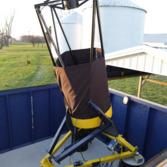 Robert Holmes, Astronomical Research Institute (ARI) in Westfield, Illinois, USA is awarded $6,662 for purchase of a Santa Barbara Instruments Group STX-16803 CCD camera for their re-commissioned 0.76 meter telescope.  The new camera will provide a wide field of view and low noise, enabling increased capability for follow-up tracking observations of newly discovered near Earth asteroids whose positions are not well known.  Holmes is the only four time Shoemaker NEO Grant winner.  In 2012, he produced 14,518 NEO observations, the new world record for the most NEO observations in a single year.  ARI is contributing $3,333 to the camera purchase. 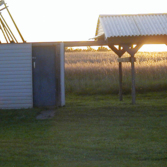 Gary Hug, Sandlot Observatory, Kansas, USA, is awarded $2,390 for 2 computers, upgraded software, and peripheral equipment that will allow more observations and reliability with his 0.56 meter telescope.  Primary use of the telescope is astrometric follow-up, as well as some discovery.  Hug was a 2009 Shoemaker NEO Grant winner. 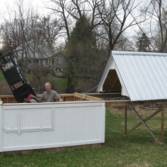 Donald Pray, Sugarloaf Mountain Observatory, South Deerfield, Massachusetts, USA is awarded $8070 for the mirror, structure, and focuser for a new 0.5 meter telescope.  The telescope will be used primarily for asteroid binary systems, and to learn the physical parameters of these systems, including determining the rotation rate of the primary body and secondary when possible, the orbital period of the system, and the relative diameters of the primary and secondary.  Sugarloaf Mountain Observatory will contribute the camera and mount for the new telescope.  Pray was a recipient of a 2007 Shoemaker NEO Grant. 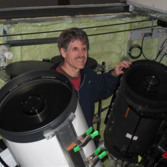 Robert Stephens, Center for Solar System Studies (CS3) in Landers, California in the Southern California desert, is awarded $8,065 for purchase of a dedicated Finger Lakes CCD camera for a 0.4 meter telescope.  This will vastly extend the observational nights for this telescope, currently sharing a camera with another facility.  One of the main foci of the observations with the new system will be photometry (brightness as a function of time), critical to determining properties of the asteroids, such as spin rate, and whether “one” asteroid is actually a binary pair.