Needless to say, we are very pleased with this. It represents an increase of $215 million to planetary science above 2016, and is $345 million more than the President originally proposed for this year. When adjusting for inflation and programmatic consistency, this is the best budget for NASA's Planetary Science Division since 2005. 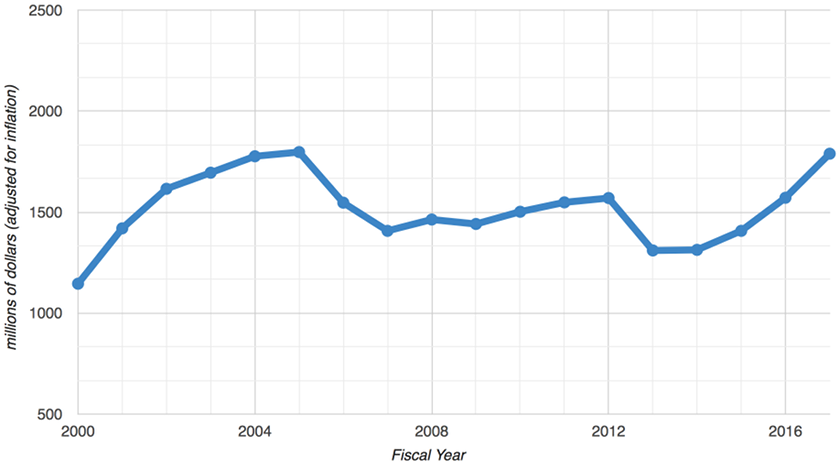 The bulk of the funding boost is directed toward the Europa Clipper mission, which receives $275 million in 2017 on a request of $50 million. This infusion of cash allows the Clipper to stay on track for a 2022 launch date, much earlier than NASA has proposed, and includes additional funding for development of a follow-on lander mission—a mission that Trump's first budget request has denied.

The Mars Exploration Program gets a $62 million boost above the request. The addition money will double the amount of study funding for a new Mars orbiter mission (which has not yet been formally requested by NASA), fund a a "Mars-copter" to fly on the Mars 2020 mission (yes, really!), allow the Opportunity rover to keep on roving, and provide Mars 2020 with some additional resources to ensure it stays on track for its launch in July of 2020.

The Discovery program, which manages NASA's competitively-selected small planetary missions, gets a $22M boost above the President's request. This will help manage the cost overruns with the InSight Mars lander and to support development of two new missions, Lucy and Psyche, which were just selected for launch in 2021 and 2023. New Frontiers was the only part of the planetary science budget to see a decline compared to the President's budget request. The New Frontiers program is in a programmatic lull, having completed development of the OSIRIS-REx spacecraft and just beginning the process of selecting the follow-up mission for launch in 2024, so this decline is not unexpected or damaging.

Here's a phrase I don't get to write very often: scientific research funding does well, increasing by nearly $15 million compared to 2016. This should help with selection rates for scientific research proposals and support the ever-growing size of the planetary science community, particularly as larger missions like Cassini wind down.

NASA's Near-Earth Objects Observation program grows by another $10 million to $60 million in 2017, but $16 million of that is directed toward the Double Asteroid Redirection Test mission, a kinetic impactor spacecraft which was developed in concert with an now-cancelled ESA mission. NASA has stated that it intends to continue working on AIDA despite the uncertainties in ESA's mission planning, though it is unclear how much this mission will cost, and if NASA will be able to accommodate a full mission budget going forward.

In terms of the big picture every science division at NASA did reasonably well. Earth Science retained its same budget as last year—$1.92 billion—and remains the top-funded science division within the agency. Heliophysics grew to $678.5 million. Compared to 2016, Astrophysics grew to $750 million, though this was less than the President's proposed growth for 2017. While at first glance this looks like positive news for Astrophysics, the division was directed to spend $105 million on the Wide-Field Infrared Survey Telescope (WFIRST), effectively cutting the funds available to all other programs by 10%. SpaceNews has details on the broader impacts to all of NASA science.

In terms of human spaceflight, SLS and Orion were big winners, with budget growth up to $2.15 billion and $1.35 billion, respectively. Commercial crew and cargo are fully-funded in 2017, though overall space operations takes a small hit. $75 million was directed toward deep space habitat development, an increase of 50% over last year.

Now that the 2017 appropriations process has finished (seven months late), attention turns toward 2018. As of yet, the Trump Administration has not provided additional details beyond their "skinny budget" proposal which, though it slashes funding for many sciences, generally treats NASA quite well. More details are expected by the end of May. Congress is already behind in their schedule for appropriations, and has not yet passed a budget-resolution, making life uncertain for the relevant appropriations subcommittees.

In the meantime, we should savor this moment. NASA and planetary exploration are enjoying a complete reversal in fortunes from just a few years ago. Europa, Mars, and many other destinations are in our sights, and the future is looking bright.

However, this might be a good time to write a letter to your members of Congress, asking them to continue funding for NASA and space science. The effort never ends.