At the end of my last LightSail update, I said I was hoping to take a breather from talking about the spacecraft’s sail deployment system and switch gears to a discussion on how Earth’s magnetic field affects LightSail’s navigation system. I’ve decided to save that for another time, because I received some good news from the LightSail team: The latest boom deployment tests went smoothly, paving the way for a full system test later in July.

There’s also a big announcement on LightSail launch dates coming from The Planetary Society next week. Planetary Radio’s Mat Kaplan will host CEO Bill Nye and LightSail project manager Doug Stetson for a live webcast on Wednesday, July 9 from 7:00—8:30 p.m. PDT. I’ll make an appearance as well. I’m under embargo on the details, but I can tell you that it’s some pretty cool news.

Anyway, I’ll get back to LightSail’s deployment issues. Since my last update, the team has been testing their fixes to a series of boom deployment problems using BenchSat, the LightSail engineering test model. On Tuesday, June 24, they felt confident enough with their results to try another boom deployment test without the solar sails attached on LightSail-A.

“The motor ran very well, with no stall issues,” wrote Riki Munakata, an engineer for Ecliptic Enterprises, in a subsequent email. During the team’s regular Monday conference call, I learned that the fixes for the spacecraft’s processor overload, power anomalies, and premature deployment stops all seem to be working.

Here’s a video from one of the June 24 test deployments:

LightSail-A has now been boxed up and sent to a clean room at Cal Poly San Luis Obispo, where it awaits a full day-in-the-life test scheduled for late July. Assuming that goes well, the spacecraft will be shipped off for environmental testing.

During Monday’s conference call, the LightSail team discussed an interesting dilemma regarding the spacecraft’s cameras. In short, they need to decide on whether images shot during the two and a half minute sail deployment sequence should prioritize quantity or quality. This seems like a good opportunity to dig into the camera system.

To begin, here’s a picture of how LightSail will look right after it is released into orbit, with its solar panels stowed. The spacecraft is actually upside-down in this image. Its Z-axis, which will be pointed toward the sun, is positive towards the table. 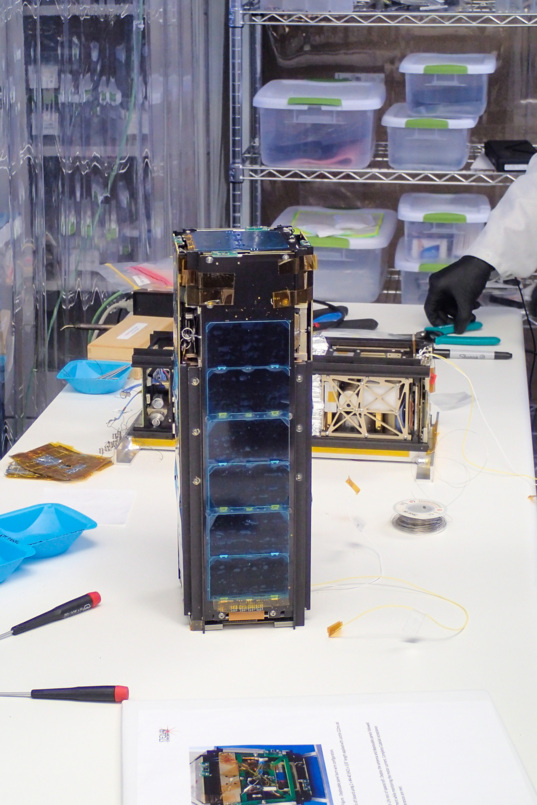 The four solar arrays deploy by swinging outward from the spacecraft (in the previous picture, the “hinges” are on the bottom). After that happens, LightSail looks like this: 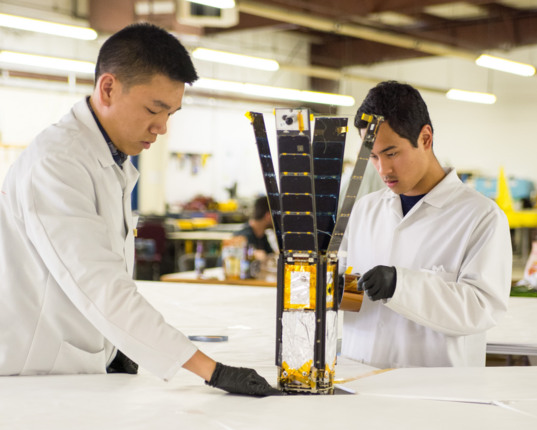 You may notice there are wires holding the solar arrays upright; in space, without the tug of gravity, they’ll stay in place by themselves. Two of the solar arrays have cameras at their ends. The cameras were developed by The Aerospace Corporation and are equipped with Micron Technology MT9D131 CMOS digital sensors. The Aerospace Corporation calls the cameras PSCAMs—Planetary Society Cameras.

A critical component of both LightSail flights is photographing the deployment of the solar sails. During that time, the PSCAMs snap an image every 14 seconds. The two cameras are staggered by 7 seconds to get alternating views from opposite sides of the spacecraft.

The PSCAMs automatically compress each photo into a JPG file less than 256 kilobytes. Each camera can store up to 32 images, giving it a capacity of 8 megabytes. The max resolution of each image is 1600 x 1200, or 2 megapixels.

The capture, compression and storage process isn’t much different than that of an Earth-based consumer camera. The above numbers pale in comparison to today’s DSLRs and smartphones. However, iPhones aren’t tested in vacuum chambers, nor are they shaked and baked for space durability.

The LightSail team can choose what compression level they want each PSCAM to use. To stick with a consumer camera analogy, my Nikon D5100 has three JPG compression levels: 1:4 (high quality), 1:8 (normal quality) and 1:16 (basic quality). Lower compression equates to bigger file sizes, while higher compression offers smaller files at the expense of image quality. I always leave my Nikon set to 1:4, because unlike LightSail, I enjoy pretty much limitless storage.

What happens if the LightSail team opts for low compression and violates the 256 kilobyte file size limit? The PSCAM manual explains:

“The camera only has limited storage space for individual images.  If the compression ratio is set too low, it is possible that the file size will exceed this limit.  The camera has a built in recompression algorithm which automatically increases the compression ratio by two (2) and immediately captures a new image if the file size of the original image is too large.  Note, repeated iterations of this algorithm may significantly extend the amount of time it takes the camera to capture a valid image.”

And in Tuesday's boom deployment test, that’s exactly what happened. The compression ratio was set at 1:16, so each PSCAM kept attempting to save images bigger than 256 kilobytes. This caused the cameras to increment the compression ratio and try again until an acceptable file size was reached. Here’s a timelapse video I made using PSCAM images captured during two different deployments. You’ll notice each camera only captured 5-10 images during the entire two and a half minute deployment sequence, because it had to keep incrementing the compression ratio in order to save a valid image.

LightSail 1 boom deployment as seen from PSCAMs This series of images shows LightSail 1's TRAC (Triangular Rollable and Collapsible) booms being deployed, as imaged by the spacecraft's two onboard PSCAMs (Planetary Society Cameras). The first series of images were taken with the solar arrays and cameras deployed and represent a flight-like state. The second deployment series was shot with the solar arrays partially stowed, providing a unique, inward-facing view of all four TRAC booms as they deploy.Video: LightSail Team

There is no magic formula that definitively predicts the file size for a particular compression ratio. That’s because file sizes are also dependent on what’s actually going on in each image.

I’ll go back to my Nikon for another example. On my computer, I have a folder of photos taken of my toddler daughter, Marian, running around our house. All of the photos were shot with a 1:4 compression ratio and have a resolution of 4928 x 3264. When I sort the folder by file size, I can see that the individual files have sizes ranging between 3.2 to 8 megabytes.

The largest, 8 megabyte file is a picture of Marian trying to put two shirts on at once, all while ransacking a cabinet of pots and pans in our kitchen. There’s a variety of colors and brightness levels in the photo.

At the other end of the spectrum, my 3.2 megabyte image is a photo of Marian in the backyard. I was crouched when I took it, so her profile is set against a solid background of blue sky that fills most of the frame. Her face is evenly lit, and she’s wearing a black and white striped shirt. It’s a simple image without much variation in color and complexity.

And herein lies the dilemma: The file size of each PSCAM image will ultimately depend on what’s in each photo. Will the sails be evenly lit, or will their brightness vary? Will deployment occur at a point in orbit where Earth shows up in the background? There are many variables to consider, and ultimately, it will be impossible to know how the final photographs look. Therefore, the LightSail team will have to make their best guest on the proper compression ratio, taking into account an important question: Do they go for quantity or quality?

Regardless of the decision, it may take a few days to get the photographs back to Earth. LightSail team member Alex Diaz told me the spacecraft transmits at 9600 bits per second, which means it could take a few minutes to transmit a single image to the ground. LightSail can only transmit and receive signals when it is in range of its ground station at Cal Poly San Luis Obispo (another station operated by Georgia Tech may eventually be added). All in all, there may only be about ten minutes each day in which the LightSail team can download pictures from the spacecraft.

Diaz also told me that after the deployment images have been downloaded, the LightSail team hopes to capture a pretty picture of the solar sails with Earth in the background. The CubeSat lacks a sophisticated navigation system like a star tracker, but it can be roughly oriented using its four onboard magnetometers. Once the spacecraft is in position for the photo op, the PSCAMs will fire away. Engineers on the ground will be able to download photo thumbnails just a few kilobytes in size to see if they snapped any good pictures. They can then opt to download full-resolution images or delete the photos and try again.

Hopefully they’ll eventually nail a good picture, and we’ll end up with the first picture of a solar sail in Earth orbit.