There was a Senate hearing on the future of Mars exploration today, "From Low-Earth Orbit to Mars". It was held by the Committee on Commerce, Science, and Transportation, which oversees NASA. 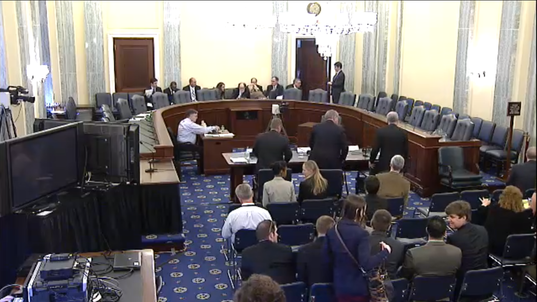 Empty chairs dominate the senate chamber at the "From LEO to Mars" hearing.

Due to the massive budget cuts facing the planetary science program and the removal of NASA participation from the 2016 and 2018 joint-ESA Mars missions, this should've been a very important hearing. Steve Squyres, Chairman of the NASA Advisory Council and Principal Investigator of the Mars Exploration Rovers, was there, as well as John Grotzinger, the Project Scientist for MSL Curiosity.

Only two senators made it to this hearing, though: Senators Bill Nelson (D-FL) and Kay Bailey Hutchison (R-TX).

Where was everyone else? Why isn't there more interest from the Senate? If you live in the one of the following states, I've made a webform for you that allows you to email your Senator on the committee and ask why they missed the hearing. They need to know that we're paying attention to this stuff.

More about this hearing later.