I'm writing my script for my next 365 Days of Astronomy podcast, which will be in honor of the 23rd anniversary of the Voyager 2 Uranus encounter, and since this will be an audio podcast I have to confront the problem of how to pronounce the name of the planet. Merriam-Webster lists two accepted pronunciations, either of which sets schoolchildren tittering, essentially "urine us" or "your anus." Actually, it's not just schoolchildren who titter. Over the last week as I've occasionally been researching the topic I've enjoyed tossing people offhand comments such as "I'm researching Uranus right now," or "there's a new dark spot on Uranus," or my favorite, "hey, did you know they found a new ring around Uranus?" pronouncing it using the second of the two choices, and I invariably get a smile at least.

Some of you are probably thinking "oh, grow up," but honestly, when you talk about Uranus to any English-speaking audience, young or old, I promise you that the humorous sound of the planet's name is the first thing that ninety percent of them think of. (I can't speak to what the name sounds like to non-English-speakers.) So, in my opinion, you have to confront the problem directly. Especially if you're dealing with schoolchildren. Not to comment on it makes you look either like a clueless idiot or a stuffy, humorless bore.

In a past life I taught science to fifth grade students (10-year-olds), and the course included a segment on the solar system. I planned to have the kids deliver oral presentations on different planets. The problem suddenly became one that I was going to give to some hapless 10-year old who was going to have to get up at the front of his or her class and talk for five minutes about Your Anus. Clearly I couldn't do that to the kid without addressing it directly first. So here's the solution I came up with: at the beginning of the solar system unit, I asked the kids to name planets and other things in the solar system, and (inevitably) the class clown shouted out "your anus!!" to the amusement of all. I also smiled and laughed, and pointed out that there was another pronunciation that was almost as bad, and then I got up and wrote the following in big letters on the board:

Then I instructed the class full of kids to turn to their neighbors, point, and accuse one other of being a "nuss," which they enjoyed.

A cop-out? Yes. But at least it got every kid in the room to say the name of the planet out loud, and to do it while thinking about a word that, if nonsensical, was at least not scatological. And we were all able to move on and have a good time exploring the solar system without toomuch embarrassment over the pronunciation of the name of one of its largest members. 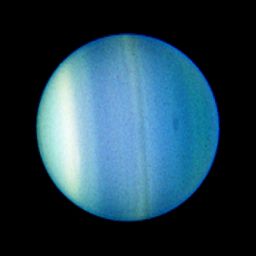