Is Opportunity, the longest-surviving rover on the surface of Mars, a mission "whose time has passed?" That's what NASA Administrator Charles Bolden said last week, which is a remarkably different conclusion than that of a recent independent review panel, which ranked Opportunity's coming science plan higher than any other mission at the red planet.

Last Thursday, NASA Administrator Charles Bolden testified before the Senate's Subcommittee on Space, Science, and Competitiveness, an authorizing committee with oversight over the U.S. space agency (though not over its budget).

The topic was the White House's 2016 budget request, which, despite providing a 2.9% increase to NASA's overall budget, requests no money at all for continued operations of MER Opportunity and the Lunar Reconnaissance Orbiter (LRO).

Senator Cory Gardner (R-CO) pressed Bolden on the decision to end Opportunity's mission prematurely. During the resulting back and forth, Administrator Bolden made what I consider a surprising statement regarding Opportunity's value:

"We cannot continue to operate instruments and missions whose time has passed, because I won't be able to put something like InSight on Mars in 2016…I have to make choices"

I assume that the Administrator was making a metaphorical point regarding the ongoing debate about priorities, because there are two major problems with this statement. Let's look at them.

Has Opportunity's time passed? Well, it's been on Mars for over 11 years now, longer than any other mission to Mars' surface. That's a long time, but time used well. In addition to finishing the world's fastest (albeit only) martian marathon, it has helped to revolutionize our understanding of the role of liquid water in Mars' history. Its exploration is ongoing. In fact, it just discovered a rock "unlike any we've seen before" while searching for clay minerals near Marathon Valley. The pictures it returns to us every day are haunting and beautiful.

That's all well and good, but perhaps NASA evaluates the value of this scientific return differently. It does: it's called the Planetary Science Senior Review, and it happens every two years. Every mission operating beyond its original lifetime must submit its future science plan to an independent panel of experts for review and scrutiny.

This is no rubber stamp review. The most recent findings of this senior review process, which were released last year, were extremely critical of the Curiosity's rover's science plan. The report of the review panel also recommended shutting off multiple instruments it saw as unnecessary on the Lunar Reconnaissance Orbiter to save money.

So how did Opportunity rank in this independent senior review? The answer is: higher than every other current Mars mission. Yes, that's right. Its science plan ranked higher than those for Curiosity, the Mars Reconnaissance Orbiter, Mars Express, and Mars Odyssey.

This is not to say that other missions were not seen as important. The report declared that "all have important strengths. That is, all represent added value to...the American taxpayer because they are essentially new missions without the development and launch costs."

NASA's Planetary Science Division, which builds and manages all planetary exploration spacecraft, and which, notably, does not decide what the NASA Administrator supports and doesn't, agreed with the findings of the senior review report and approved the extended mission plans for Opportunity and LRO for two additional years.

So is Opportunity a mission whose time has passed? I don't think so. The Planetary Science Division of NASA didn't think so. And the independent experts NASA asked to evaluate this very question didn't think so, either.

"We cannot continue to operate instruments and missions...because I won't be able to put something like InSight on Mars in 2016"

The other part of the Administrator's statement I take issue with is all about the conflict between the old and the new. Bolden is pointing out that the next mission to Mars, InSight (which will launch in 2016), would not get the funding it needs because ongoing missions like Opportunity and LRO are too costly.

Here, I have to assume that the Administrator was speaking metaphorically in order to make a point.

The cost to operate the Opportunity rover is about $14 million per year. This is a little less than 1% of the beleaguered Planetary Science Division's budget, and about 0.08% of NASA's total budget.

InSight was selected as the next mission to land on Mars in 2012. Opportunity was running that year. Work on InSight began in earnest; funding peaked at $203.3 million in 2014 as assembly and integration of the spacecraft began. Again, Opportunity explored Mars that year. Same for 2015 as work on InSight continued. For 2016, the last year of InSight's development, NASA is requesting $92.1 million to finish and launch the spacecraft, less than in previous years. Suddenly, Opportunity is too expensive.

The vast majority of the money that will ever be spent on InSight has already been spent. For the entirety of InSight's development, from 2012 to now, Opportunity continued to explore the martian surface. It's clearly not a choice between Opportunity and InSight, they've coexisted happily during the most expensive period of InSight's life cycle.

I'm not making an argument here. This already happened. This is fact.

Despite this, Bolden's fundamental point is valid. There are hard choices to be made between future missions and current missions. Even though Opportunity is small fraction of NASA's budget, the cost of operating every planetary science mission (Opportunity, Cassini, Curiosity, MESSENGER, etc.) adds up to about 20% of all money spent on planetary science in 2015.

But that's not the whole story. NASA has consistently requested cuts for its Planetary Science Division every year for the past four years, putting enormous budgetary pressure on existing missions, scientific research, and future spacecraft development. Thankfully, Congress has stepped up and mitigated these cuts for three out of those four years (the fourth year is being debated now). I am hopeful that Congress will once again come through and provide the $26 million needed to keep both Opportunity and the Lunar Reconnaissance Orbiter missions going in 2016 (though you should probably let them know that you support this).

This is not a zero sum game, despite what people think often think. The 2016 budget request for NASA proposed a $518.9 million increase over 2015. Why not earmark some of that $518.9 million for two of the best-performing, scientifically valuable, lowest-risk spacecraft NASA has? Or even just tack it on to the top? What's the difference, really, between $518.9 million and $544.9 million in a $1.194 trillion total discretionary budget request? In addition, Congress has demonstrated a consistent willingness to add money for planetary exploration by adding funding for three years in a row. If NASA had asked, it's likely that Congress would have been happy to support both missions.

Bolden is right: there are choices to be made. But not the false choice between two stalwart missions and the next Mars lander. The choice we face is whether to fight for Opportunity and LRO or not. Let's choose—all of us—to fight for these missions and for all of the precious scientific discoveries they have yet to make. We lose them now, and they're likely gone forever. 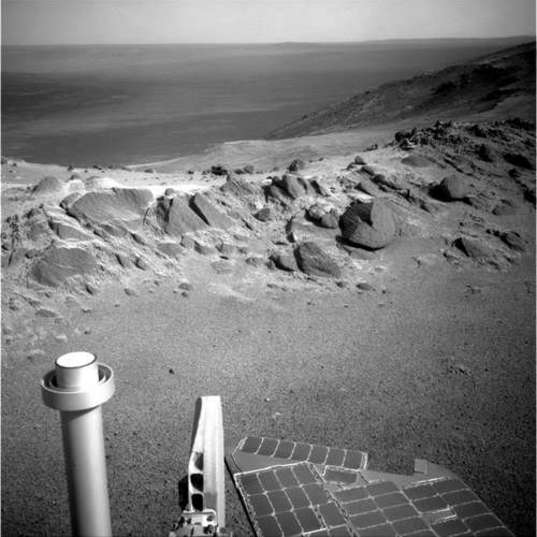 Moving in on Charbonneau

Opportunity took this image with her NavCam as she approached the rock target the team named Jean Baptiste Charbonneau on Feb. 12, 2015. It's a rock unlike any the MER scientists have seen before and although they are still analyzing the data, they think it may be an igneous rock or perhaps impact melt. Caption by A.J.S Rayl.