Venus Express Project Scientist Håkan Svedhem tells us about the spacecraft’s harrowing descent into the Venusian atmosphere, what it is currently up to, and what he’d like to see next at that forbidding planet. Emily Lakdawalla is following Rosetta’s rendezvous with a comet. Bill Nye joins us from Japan to celebrate the announcement of instruments for the 2020 Mars Rover, and Bruce Betts braves the humid atmosphere of SoCal for What’s Up. 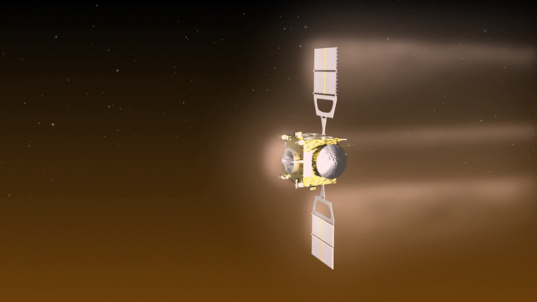 This week's prize is "Curiosity: An Inside Look at the Mars Rover Mission and the People Who Made It Happen" by Rod Pyle, and a Mars Science Laboratory mouse pad.

Complete the contest entry form at http://planetary.org/radiocontest or write to us at planetaryradio@planetary.org no later than Tuesday, August 12, at 8am Pacific Time. Be sure to include your name and mailing address.

Approximately how long was the Apollo Lunar Roving Vehicle that astronauts drove on the moon?

On Apollo 11, what was used to make a broken circuit breaker work on the Lunar Module so that it could leave the moon?

Buzz Aldrin used a felt tip pen to fix the broken circuit breaker on the Apollo 11 lunar module. He says he still has it.