NASA just announced the selection of science instruments for the Mars 2020 rover, a structural copy of the Curiosity rover to be launched in 2020. We at The Planetary Society are ecstatic to be an education and outreach partner on the selected Mastcam-Z mast camera system. Planetary Society President Jim Bell, in his other life as an Arizona State University professor, is the principal investigator for Mastcam-Z.

Jim said, "I am excited to help bring Planetary Society members along for our next ride to Mars!" Jim has a long science history with rover and other planetary imaging, and has an eye for stunning images, such as those published in his books Postcards from Mars, and Mars 3-D: A Rover's Eye View of the Red Planet.  Very early in the proposal development process, Jim began talking with us and encouraging the development of ideas for sharing the wonder of Mars with the public utilizing his spectacular instrument. 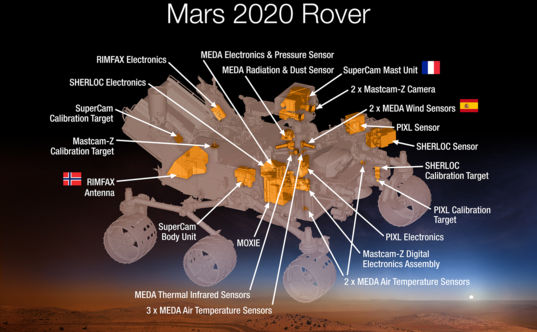 On the mast are upgraded versions of instruments on Curiosity: Mastcam-Z (color, stereo, 3D, zoom-capable cameras); and SuperCam (upgraded version of ChemCam). On the arm are PIXL, an X-ray fluorescence spectrometer and imager, and SHERLOC, a Raman spectrometer and imager. RIMFAX is a ground-penetrating radar; MEDA is a meteorological package; and MOXIE will advance goals in in-situ resource utilization by producing oxygen from carbon dioxide.

Mastcam-Z is a color stereo camera system. It has a zoom capability that we have never had on a Mars rover. It will produce stunning images from the surface of Mars, including in 3-D.  It also includes a range of filters carefully selected for geologic studies. And, the zoom capability will help in the planning of drives for the rover.  Mastcam-Z derives from the Curiosity Mastcam instrument, and will be built by the builders of Curiosity's Mastcam, Malin Space Science Systems. So, imagine the amazing Curiosity images, but now with zoom and with more science capability.

We have lots of ideas to share the exciting story and results of Mastcam-Z. We'll be sharing them over time as we work with Jim, the instrument team, and NASA, but for now, I just wanted to let all of you know, including our dedicated members who make these types of spacecraft involvement possible, that we are once again headed to Mars!

Help support The Planetary Society and great projects like this:

Instrument principal investigators can be from universities, NASA, JPL, or other types of organizations. The key is that they have a great instrument, and a great plan for managing it. Competitions like for Mars 2020 are open to all these categories to try to find the best ideas and teams to make those ideas happen. In answer to your other questions: it is very common for university professors to be this involved with planetary mission, and yes, Dr. Bell as well as many of the co-investigators on the instrument will involve students.

Dr. Betts. I noticed that Mastcam-Z will have 3-D capability. Does that mean that James Cameron will be involved with this camera?

Very excited to be part of the Mars 2020 rover team. Thanks!

Considering the likelihood that the samples collected won't be retrieved for many years if at all, did NASA consider modifying the Sky Crane for a soft landing and have an attached return vehicle on it? The samples could be put into orbit around Mars for easy retrieval at a later date or sent back to earth orbit and retrieved by the Orion spacecraft. A sample return would put Mars exploration years ahead.

Dieter: Mars 2020 is only happening because NASA was able to keep costs down by sticking very closely to existing technology developed for Curiosity. As such, the entire EDL package will essentially be a duplicate of what flew on MSL. Modifications add cost, and a Mars launch vehicle needs significant technology R&D before it's ready. NASA, unfortunately, does not have the money or time to get this ready for 2020.

Casey, thanks for the quick reply. I'm aware of NASA's budget constraints and the good work you've been doing advocating planetary science. I'm not a supporter of manned missions (which sadly take up most of NASA's budget) and this is probably not the right forum to discuss this (and for that I apologize) but another rover (costing almost as much as Curiosity) isn't pushing the "exploratory peanut" very far down the road! NASA needs a "game changer" and I believe the public would be much more excited and supportive of a sample return mission? Was this even considered?

Dieter: I think we (and the planetary science community, and—to an extent—NASA) are with you in this. The science community put together a major report a few years back, the Planetary Science Decadal Survey, which recommends a Mars Sample Return campaign as the highest priority planetary mission. The caveat is that they want to break it into three separate missions spaced out over 15 - 20 years in order to make the costs tenable. So in this view, Mars 2020 is the first, crucial step towards a sample return (gathering the samples). Now we have a much stronger position to argue for NASA to invest in technology and commit to a mission to get those samples back to Earth. It's probably the not ideal solution, but it's the most practical.