After a 2-billion-kilometer journey that began in September 2016, NASA's OSIRS-REx spacecraft has safely arrived at asteroid Bennu. At 17:00 UTC, with the spacecraft just 20 kilometers away from its 500-meter-wide target asteroid, OSIRIS-REx lit its engines for a 20-second burn that put it on course for an initial close flyby of Bennu's north pole tomorrow.

"We know the burn is occurring," said Javi Cerna, an OSIRIS-REx telecom engineer, during a NASA TV broadcast from Lockheed Martin in Littleton, Colorado. Cerna watched his computer screen closely as the spacecraft's radio frequency shifted, indicating a change in velocity. "We have arrived!" he called out moments later.

Back at the University of Arizona, which is leading the mission, a crowd watching at the Stevie Eller Dance Theater broke into cheers. Dante Lauretta, the mission's principal investigator, told reporters later that the burn appeared to have gone well, but he was eager to read the navigation report, which was probably waiting in his inbox.

"As soon as we're done here, I want to get to my office and get back to work," he said.

Choosing today's burn as the official arrival moment was somewhat arbitrary, but as good a time as any. OSIRIS-REx has had Bennu in sight since 17 August, and by mid-November, the asteroid was big enough to make out surface details, including a 55-meter-wide boulder Lauretta likened to a pimple. Jonathan McDowell, an astronomer at the Harvard-Smithsonian Center for Astrophysics, said that OSIRIS-REx arrived within Bennu's Hill Sphere — the region where the asteroid’s gravity field is stronger than the Sun's — on 1 December.

OSIRIS-REx will fly over Bennu’s north pole on 4 December, at a distance of just 7 kilometers. Engineers will once again watch closely as the spacecraft's radio frequency shifts, this time not because of an engine burn, but because Bennu's gravity is tugging on the spacecraft. The amount that the signal shifts will help determine how massive the asteroid is. The spacecraft will then make two more polar flybys, giving the team on Earth a chance to get to get comfortable with the spacecraft's navigational capabilities near Bennu.

During the first flyby, the spacecraft's Canadian-provided laser altimeter, OLA, will be powered on to start making topographic maps of Bennu's surface. On the third flyby, Lauretta said the high-resolution MapCam color camera will take images. He expects those pictures to be back on Earth around 10 December, when a press conference is scheduled at the AGU fall meeting in Washington, D.C. There, the OSIRIS-REx team plans to present early Bennu science results. 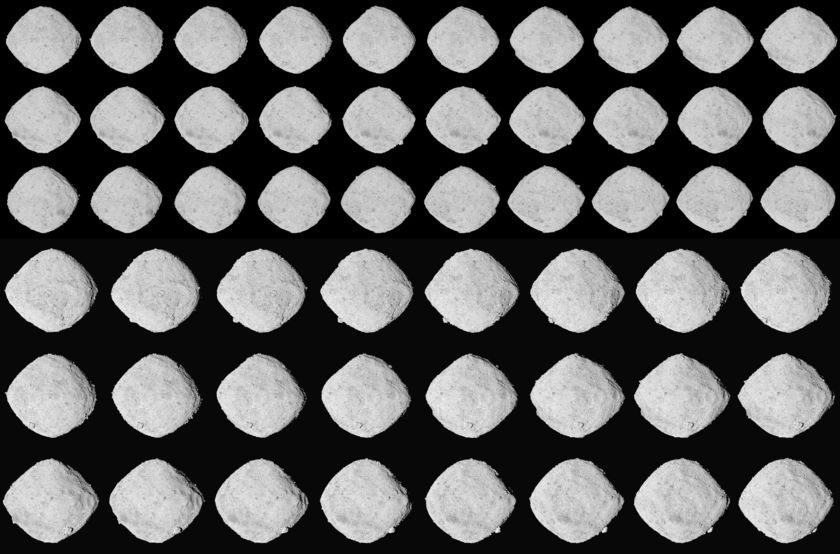 This montage includes images from two full rotation surveys of asteroid Bennu by OSIRIS-REx on 25 and 27 November. The 25 November set was taken from a slightly longer distance than the 65 kilometer-range of the 27 November set. The images were taken from an animation released by the mission. Click here for a fully enlarged version in lossless PNG format.

After the polar passes, OSIRIS-REx will move on to Bennu's midsection for an equatorial survey, and spend most of 2019 getting a comprehensive look at the entire world. Daniella DellaGuistina, the mission's lead image processing scientist, said the spacecraft will eventually begin navigating using landmarks on Bennu rather than tracking stars in the sky. She said Bennu will be the smallest-ever object humans have navigated in this manner.

Also in 2019, the team will begin selecting boulder-free candidate sites from which to collect a sample for return to Earth. DellaGuistina said up-close looks at those locations will reveal objects on the surface as small as a penny.

As it has been for Japan's Hayabusa2 sample return mission to asteroid Ryugu, finding the right spot for OSIRIS-REx to touch down on Bennu could be difficult.

"This does look a challenging surface," said Lauretta, gesturing to a blown-up image of Bennu. "There's a lot of boulders here; it's rough and rugged." The team plans to enlist citizen scientists to help count boulders through CosmoQuest. 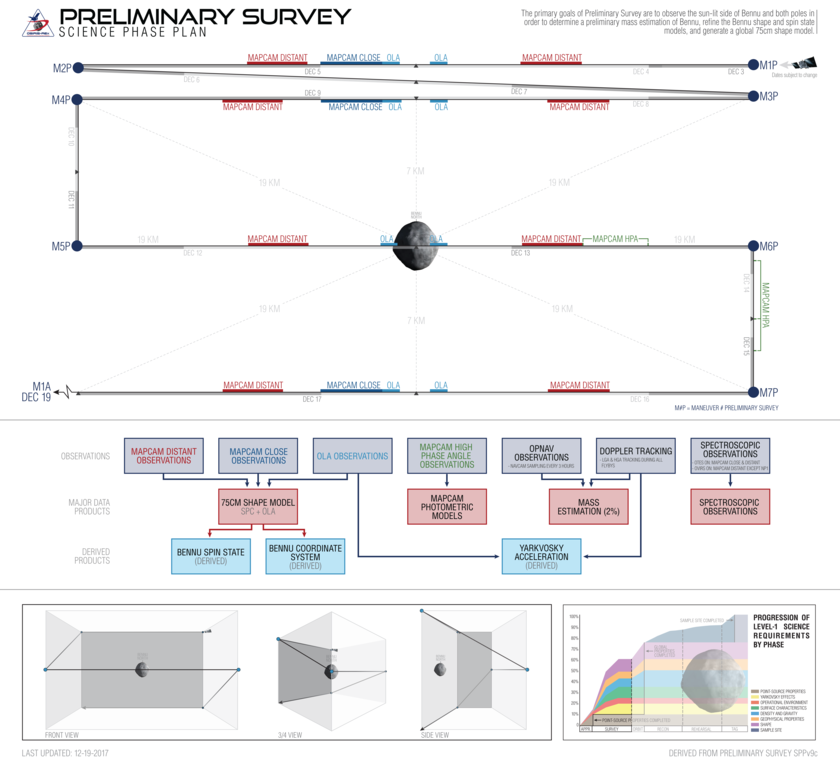 The spacecraft will nominally collect a sample on 4 July 2020 and return it to Earth in 2023. Lauretta said there was a chance of sending the carrier spacecraft on an extended mission after that, but for now, he wants the team to stay focused on the primary mission.

For the University of Arizona, having OSIRIS-REx in the spotlight couldn't come at a better time. The school’s new strategic plan calls for making the UA the No. 1-ranked planetary science school in the world. To that end, the College of Optical Sciences, which helped design some of OSIRIS-REx’s cameras in conjunction with the Lunar and Planetary Laboratory and Steward Observatory, recently received a $20 million endowment. UA president Robert Robbins said space science missions were the school's version of winning the Heisman Trophy.

there's another oddball boulder kind of 'sitting on top of the asteroid' in the (by this orientation) southern hemisphere. Just like Ryugu's, also in the 'southern' hemisphere (northern by images). I'm just really confused how prominent boulders come to rest on tiny asteroids like this. If they determine that it's native to Bennu that's one thing, though i'm curious what kind of process would form a boulder like that. If it's not native, how the heck did it land without an impact? Why am i so fascinated with these boulders?

Oh WOW!!!! Bennu's a CUBE!!!!! a little rounded at the edges, but quite cubicle nonetheless.