The Planetary Society's LightSail 2 spacecraft is continuing to sail on sunlight in Earth orbit. The high point, or apogee of the spacecraft's orbit around the Earth was 729 kilometers on Monday, 5 August—an increase of 3.2 kilometers since sail deployment on 23 July. The spacecraft has also captured a few new images, which are available on our raw image downlink page. 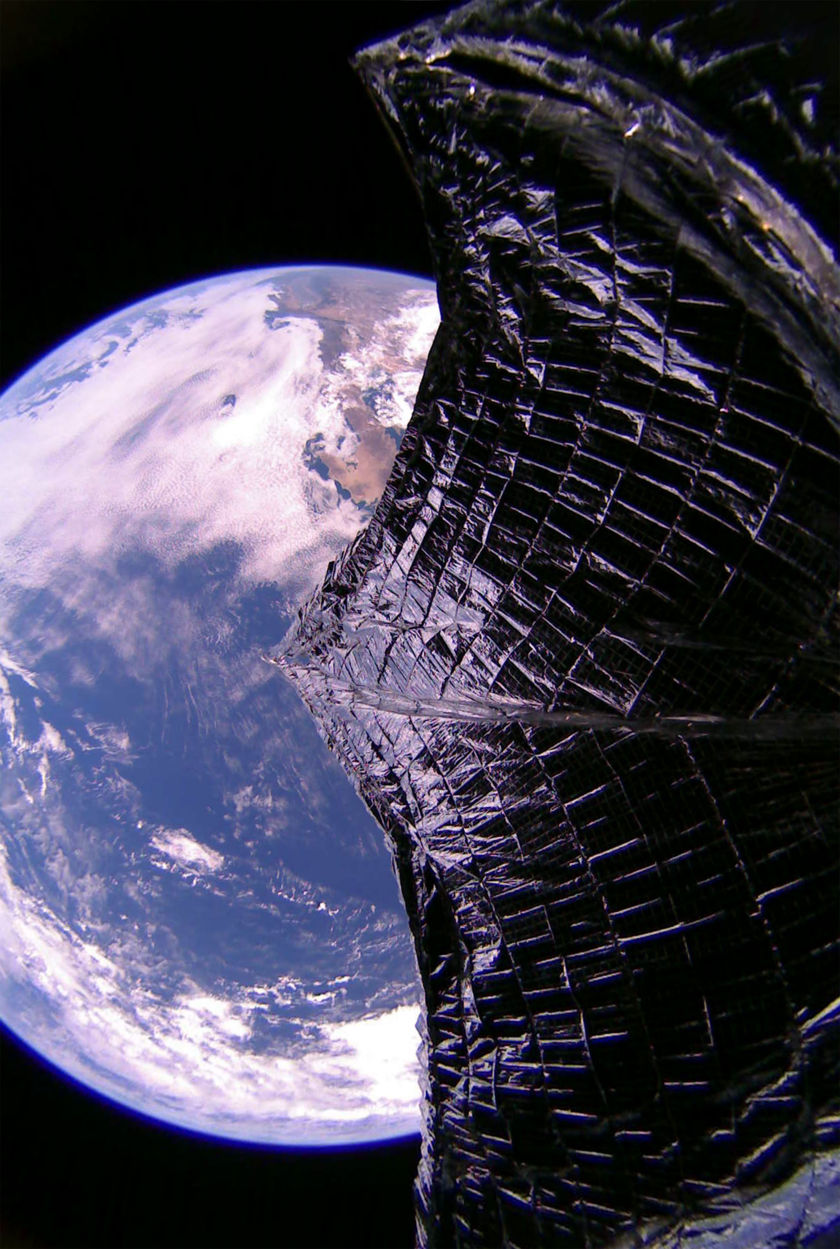 LightSail 2 captured this image of its deployed solar sail and Earth on 31 July 2019 at 16:31 UTC, as the spacecraft was passing over the Pacific Ocean. The image has been oriented to place north up. The Pacific Ocean and Baja California are visible in the background. LightSail 2's dual 185-degree fisheye camera lenses can each capture more than half of the sail. This image has been de-distorted and color corrected.

LightSail 2's attitude control system has been actively controlling the orientation of the spacecraft since shortly after sail deployment. As mentioned in our last update, the momentum wheel, which swings the sail broadside and then edge-on to the solar photons each orbit, has been saturating—reaching its speed limit—a couple of times per day. When that happens, LightSail 2 must leave solar sailing mode and enter detumble mode, which spins the wheel down and allows the spacecraft's electromagnetic torque rods to stabilize the vehicle.

During the first 10 days following sail deployment, the spacecraft was in solar sailing mode about two-thirds of the time. On 3 August, the mission team uploaded a software patch that automatically switches the spacecraft to detumble mode when it is in Earth's shadow.  Over the past couple of days, this update has allowed LightSail 2 to consistently stay in solar sailing mode during the sunlit portion of each orbit.

On 5 August, mission operators uplinked a new set of attitude control parameters to the spacecraft that should result in somewhat slower turns induced by the momentum wheel. This is intended to help keep LightSail 2 from overshooting its targeted orientation when solar sailing.

Justin Mansell, a Ph.D. student at the University of Purdue who works on the LightSail 2 mission, provided the below plot showing the angle between LightSail 2's long axis and the position of the Sun over the course of 3 orbits on 28 July. When the spacecraft's thrust is on, the angle should be zero, meaning the CubeSat axis is aimed directly at the Sun and the sail is perpendicular to the solar photons. When the thrust is off, the angle should be 90 degrees, as the sail turns edge-on to slice through the solar photons. LightSail 2's attitude control system currently has a margin of error of roughly 30 degrees, and the points shown in the plot are five minutes apart, based upon the telemetry data captured in flight.

This plot shows the commanded sail orientation of LightSail 2 during 3 orbits on 28 July 2019, versus recorded flight data.

While the graph shows LightSail 2 tracking the desired orientation fairly well, it also shows why the mission team is trying to optimize the way spacecraft manages its momentum and performs turns. During the first orbit, from 00:00 to 02:00 UTC, the flight data generally tracks the commanded orientation, though the spacecraft tends to overshoot on turns back to the 90-degree Sun angle. By the later orbits, the turns are less accurate as the momentum wheel approaches its saturation limit. The recent updates are aimed at improving this.

LightSail 2 Orientation During a Single Orbit

This video shows LightSail 2's orientation with respect to the Sun during a single orbit on 28 July 2019. For full context, see this article.

In the first half of the video, LightSail 2 attempts to fly edge-on into the solar photons, maintaining a 90-degree angle with the Sun, as indicated by "feather" mode. The gaps between data points are not interpolated so as to not misrepresent the data, which makes it look like the sail is jumping around more than it actually is. In the second half of the video, LightSail 2 is in “thrust” mode, trying to keep its long axis to the Sun at about zero so the sail can get a push from sunlight.

As the video shows, there are times where the sail behaves beautifully. And when that happens, the mission team sees excellent orbital performance. On LightSail 2's best day so far, the spacecraft raised its apogee by about 900 meters, showing the promise of flight by light for small spacecraft—the main goal of the program.

Mansell also simulated how the spacecraft's orbit would change if it were randomly tumbling, and plotted that against recorded flight data. Compared with a simulated tumbling solar sail spacecraft, the actual LightSail 2 rate of orbital decay (as measured by its semi-major axis, or average orbit radius) is markedly less. Apogee is being raised faster than it would be if the spacecraft were tumbling. Similarly, the actual rate of perigee drop is lower for LightSail 2's controlled flight than it would be if it were tumbling. 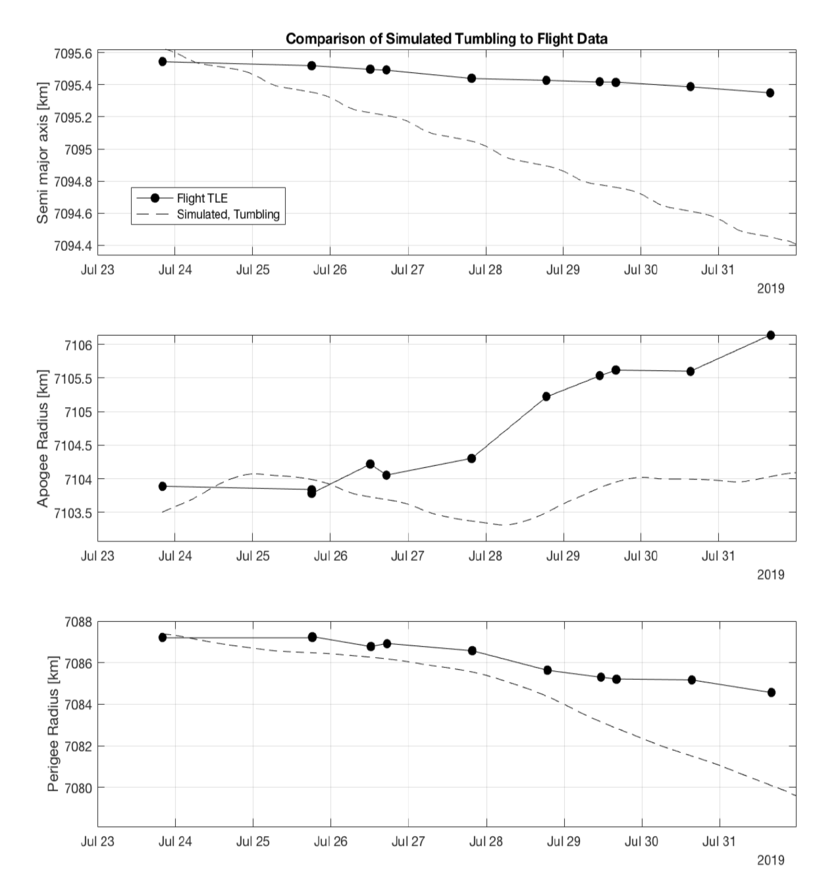 These charts show the simulated orbit of a tumbling LightSail 2 versus actual recorded flight data.

The team is now analyzing data from the spacecraft following the most recent software updates, in order to track LightSail 2’s solar sailing performance.

Jason, thank-you for the data. This shows clearly the some of the difficulty with solar sailing vs other forms of non-chemical propulsion. First, the decrease in semi-major axis shows that Lightsail is losing orbital energy faster than it is gaining it - even though you are successfully altering the orbit's shape, the sail is still sinking. Presumably this is due to the residual atmospheric drag on the large sail and demonstrates this technology is not very applicable near bodies with substantial atmospheres. Second, you show the difficulty in controlling the attitude (due, in part, by trying to control to the huge, floppy sail). Even away from planetary masses and the need to constantly maneuver the sail, it will be difficult to precisely point the sail and get a well-behaved thrust vector. The continuous nature of solar sail thrust with accompanying small pointing adjustments can partially ameliorate that. Finally, the photo of your fully deployed sail shows it has a very non-flat surface. Probably it is also rippling about with every turn, further making the calculation of the thrust vector's magnitude and direction problematic. Rendezvousing with any given target body will be more difficult and will require constant orbit determination, modelling and pointing corrections, representing a significant cost for navigation and operations teams. A thrust vector error of a fraction of a degree will turn into quite significant range errors over astronomical distances. This suggests the need for a much tighter control of the surface in any mission where a solar sail is the intended means of propulsion. Even though the Lightsail is descending, it would be useful for developing future solar sail missions if your team set a series of targets (pre-selected six-states representing of a particular orbit), and reported in the literature how accurately it was able to fly to them, rather than just modifying the apoapsis and declaring mission success.

The "color corrected" image featured in this post has identical color to the original unprocessed image (a strong red-magenta tint). Was that description in error, or is there a different version of the image that was meant to be used, but was mistakenly swapped for another one in an intermediate stage of processing? I would expect a color-corrected version to look more like this: https://i.imgur.com/mi5I6Gg.jpg

Thank you for the great updated Jason! It's nice to see that this theory actually is correct. The navigation & control now has a great set of data that programmers can code for automatic flight control. Another flight with AI on board can be studied and then reloaded onto the a mission after that to see how well AI can fly a solar sail spacecraft. As I understand, NASA wants to see our data (correct?) and if so this point could be brought up and maybe they could field proposals in a few years for follow on flight tests to get a better handle on the control aspects of this type of flight.