India's Chandrayaan-2 spacecraft is safely in lunar orbit! The combination lander, rover, and orbiter fired its main engine for 29 minutes on 20 August, slipping into orbit around the Moon at 09:02 IST (03:32 UTC). ISRO reported the orbit has an apolune, or high point above the lunar surface, of 18,072 kilometers and a perilune, or low point above the surface, of 114 kilometers. 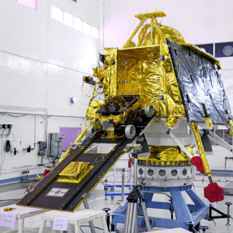 Another early morning at the Dwingeloo @radiotelescoop. This time to track the @isro #Chandrayaan2 lunar insertion burn. This is the Doppler curve of the 2230.8MHz radio signal from the lunar orbiter during the insertion burn. pic.twitter.com/2Aql8O12b9

Chandrayaan-2 is expected to use 4 engine burns to circularize and lower its lunar orbit to roughly 100 kilometers by 1 September. The lander, named Vikram, will separate from the orbiter on 2 September and drop its own orbit down to about 100 by 30 kilometers. Vikram's final descent to the surface is scheduled for 7 September.