NASA's New Horizons spacecraft is just over 100 days away from a high-risk, high-reward flyby of an ancient world on the outskirts of the solar system.

On New Year's Day 2019, the spacecraft will come within 3,500 kilometers of 2014 MU69, an estimated 37-kilometer-wide object the mission team has nicknamed Ultima Thule. The encounter will take place 6.6 billion kilometers from Earth, where it takes more than 6 hours for radio signals traveling at the speed of light to reach NASA's Deep Space Network.

There will only be one chance for New Horizons to perfectly aim its cameras and science instruments at Ultima Thule as it zips past at 14 kilometers per second, and there may be unforeseen hazards in the spacecraft's path. Nevertheless, Jim Green, the director of NASA's planetary science division, is looking forward to the drama.

"Are there debris in the way? Will the spacecraft make it? I mean, you know, you can't get any better than that," he said Wednesday, during a "science chat" broadcast from the Johns Hopkins University Applied Physics Laboratory in Maryland. "And, we'll get spectacular images on top of that. What's not to like?" 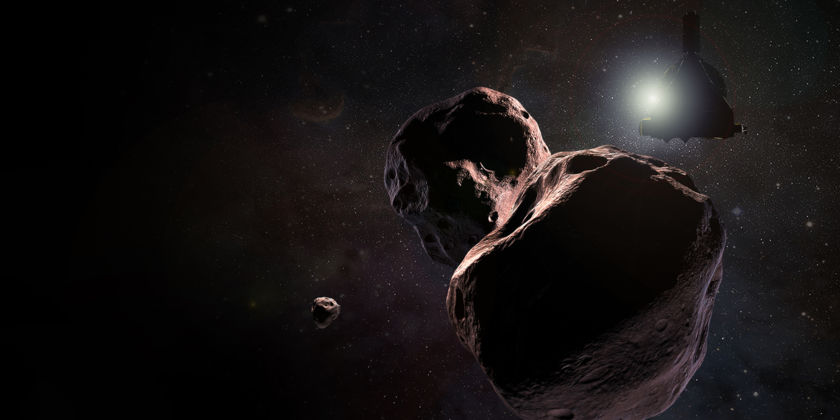 Scientists think Ultima Thule is a building block of larger objects in the Kuiper Belt, a band of frigid worlds that orbit the Sun beyond Neptune. Objects in the belt serve as time capsules from the dawn of the solar system, when a cloud of dust and gas collapsed to form the Sun, planets, and other small bodies. The temperature on Ultima Thule is expected to be just 40 or 50 degrees above absolute zero, said Alan Stern, the principal investigator of the New Horizons mission.

"It's a big deal because we're going 4 billion years into the past," he said. "Nothing that we've ever explored in the entire history of space exploration has been kept in this kind of deep freeze the way Ultima has."

New Horizons made worldwide headlines when it flew past Pluto in 2015, revealing a complex world with icy mountains and frozen plains. The big reveal of Ultima Thule probably won't garner as much publicity — but that hardly means it's going to be a cakewalk.

"Everything about this flyby is tougher," said Stern.

For the Pluto encounter, the team knew exactly where to aim, thanks to decades of telescopic observations that refined our understanding of its orbit. That won't be the case with Ultima Thule, which was only discovered in 2014 by the Hubble Space Telescope. The New Horizons team must continually track the object using optical navigation cameras, and make the appropriate course corrections.

"The orbit is not very well characterized," said Alice Bowman, the mission operations manager for New Horizons. "That's why we're doing optical navigation measurements, continuously looking to make sure we know the point in space we want to target."

That's a tricky task because Ultima Thule is dark and reddish, and only reflects about as much light as potting soil, Stern said. The object is also set against a particularly crowded region of space that is flush with background stars. 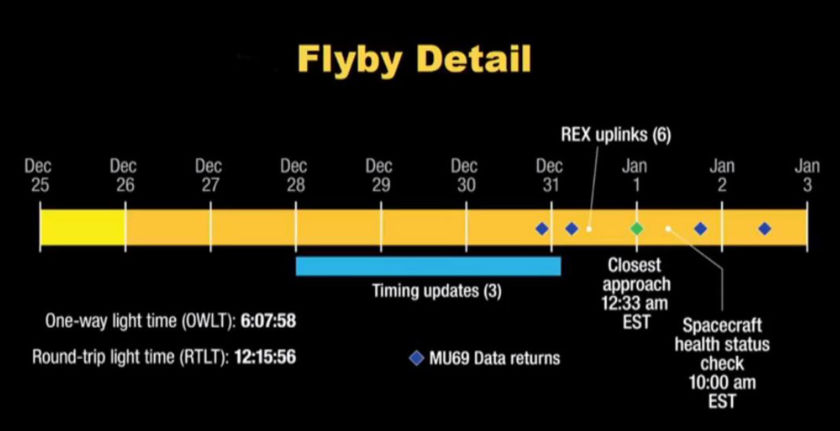 New Horizons is currently closer to the Ultima Thule than Earth is to the Sun. The spacecraft's encounter sequence starts Christmas Day, Dec. 25, and lasts nine days, through Jan. 3. The closest approach is predicted for just after midnight, Jan. 1, at 12:33 a.m. EST (04:33 UTC).

In the days just prior to that — Dec. 30 and 31, according to a NASA graphic — Bowman said the team will download last-minute navigation images to see if the spacecraft is off-target. If it is, they can make final tweaks to the time sequence for collecting images and data.

Then, there won't be much to do but wait and hope that things go according to plan. Around 10:00 a.m. EST on Jan. 1, the team expects to get a health and safety report from New Horizons letting them know it survived the encounter. The first up-close images of Ultima Thule are expected to arrive on Earth between 6:00 and 8:00 p.m. EST Jan. 1 (22:00 on Jan. 1 and 00:00 on Jan. 2 UTC), a NASA spokesperson said.

This will be worth the wait! Good luck team!

Am I correct in assuming that the Dec 30/31 data returns will include some images as a contingency against losing contact after the flyby?

Denny, I wonder about that myself. However, I believe that both the antenna and cameras are "hard mounted" to the infrastructure, meaning that the spacecraft must be rotated to aim either of them. Therefore, transmitting to Earth means not recording data (i.e., the spacecraft can be oriented to transmit, or to collect images and other data). Presuming I'm right, how much "gathering" should be sacrificed to insure something gets back?