You may have heard that both NASA and China have plans to return samples from Mars. NASA's Mars 2020 rover will curate a cache of samples for future retrieval, while China is kicking off their Mars ambitions in 2020 with an all-in-one orbiter, lander and rover. Both missions could wrap up before or around 2030.

But did you know there's also a Phobos sample mission in the works? Meet Japan's Mars Moons eXploration mission, also known as MMX, which will launch in 2024. MMX will study both Phobos and Deimos and collect a sample of Phobos for return to Earth in 2029. Japan's not going to Phobos, alone though; NASA is providing a key instrument that will get in on the fun. 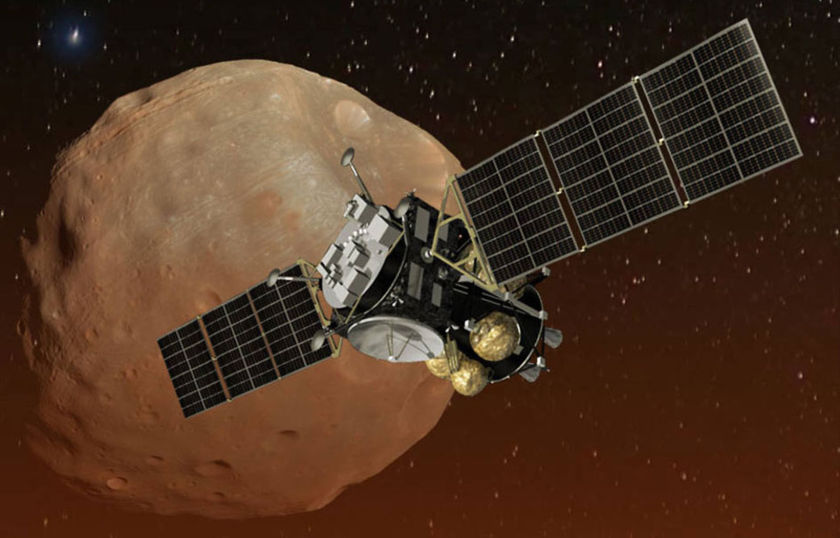 Just because this is a good excuse to post it, check out this picture of Phobos crossing in front of Deimos, as seen by Mars Express in 2009:

Mars Express used the Super Resolution Channel (SRC) of its High Resolution Stereo Camera (HRSC) to take 130 images of Mars' moons Phobos and Deimos on November 5, 2009, beginning at 08:14 UTC. The images were taken over a period of 90 seconds at intervals of one second, speeding up to half-second intervals toward the end. The image resolution is 110 meters per pixel for Phobos and 240 meters per pixel for Deimos; Deimos was more than twice as far from the camera.

The goal of MMX is to try and figure out where Phobos and Deimos came from. Did something big hit Mars and knock off a bunch of material, and that material lumped together to form the moons? Or are they captured asteroids of some sort?

"Surprisingly, we have no idea," said David Lawrence, a physicist at Johns Hopkins University serving as the principal investigator for the NASA instrument aboard MMX.

Lawrence told me that if MMX finds lots of volatiles—lighter materials like water, carbon, and sulfur—then this supports the theory Phobos and Deimos are captured, primordial objects. If the moons are bone-dry, they may have come from Mars, and could be a time capsule for early Mars conditions. (In principle, the two moons could have different origins, though Lawrence said this is unlikely.)

MMX will get its answers in two ways: analysis of the Phobos sample back on Earth, and a suite of seven science instruments that will remotely scan the moons. One of those instruments is a NASA-provided gamma ray and neutron spectrometer called MEGANE ("meh-gah-nay"), which means "eyeglasses" in Japanese.

"We're putting on gamma ray-neutron glasses to look at Phobos and tell us its composition," said Lawrence.

Cosmic rays, most of which come from outside the solar system, strike Phobos and produce gamma rays and neutrons. By measuring those particles, MEGANE can determine what elements are present on Phobos. The instrument works best when it is within a one-body radius of its target; for Phobos, this is about 11 kilometers, Lawrence said. MMX will visit Deimos as well, but the spacecraft won't be close enough to get good measurements with MEGANE.

"We need to hang out for a while to get good data," he said.

NASA's most recent Decadal Survey lists a Phobos or Deimos surface exploration mission as a priority under the agency's Discovery program, which funds low-cost planetary science missions. When Japan went looking for an international partner to build a gamma ray and neutron spectrometer, NASA took notice, deeming it a "standalone mission of opportunity" and putting out a call for proposals with a cost-cap of $20 million. The winning proposal came from John Hopkins University's Applied Physics Laboratory, for an instrument styled after spectrometers on the MESSENGER and Psyche missions. The Applied Physics Laboratory will build MEGANE in conjunction with the Lawrence Livermore National Laboratory in California. 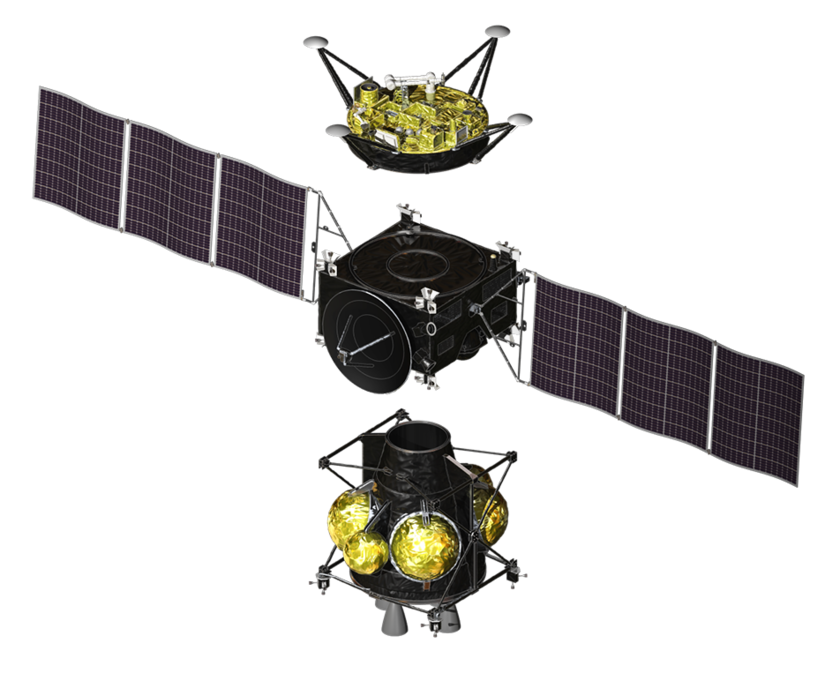 MMX has three elements: a return module, propulsion module and exploration module. All three launch as a combined unit in 2024. At Mars, MMX will spiral in to Phobos and touch down on the surface, where gravity is low—about 1,800 times less than Earth, but still strong enough to keep a spacecraft anchored safely to the surface.

The spacecraft may contain two sampling mechanisms: a drill to collect a core sample from a few centimeters below the surface, and a funnel-shaped landing leg that could push some soil into a sample container with a puff of gas. (Planetary Society members may note that this is exactly how PlanetVac Xodiac works!)

The reason for possibly having two different sample systems is because scientists aren't quite sure what the surface is like; additionally, the PlanetVac-like system could serve as a backup. There is also a separate proposal for MMX to deploy a small, French-built rover to the surface ahead of time to scout potential landing sites.

After collecting its samples, MMX will lift off and fly past Deimos on the way out of Mars orbit. The spacecraft will leave its exploration module behind and rocket home. At Earth in 2029, the propulsion and sample return modules will separate, and only the return module will land.

Though the mission won't launch for six years, Lawrence said planning is well underway, especially for MEGANE, which has to be delivered a year before launch.

"We will make many trips out to Japan because we have to get all the interfaces right," Lawrence said. "It will be a challenge. This is an ambitious mission."

My bet is that these are captured asteroids. Are you up to a low level, friendly wager Jason? LOL : )

Nice article and I hope all goes well with this long overdue mission. Just one thing Jason... when did they move the Lawrence Livermore Lab to Liverpool? teehee ;D

Also, I think the image of the MMX stack is mislabelled and should read, from top, the Exploration module, the middle module with the panels is the Return Module (housing the sample-capsule on the opposite face to the antenna and isn't shown here) and at bottom is the Propulsion Module. :)

Yes, this is overdue. I wish Deimos would receive some more attention as well. In due time, a resource in a high energy orbit around Mars will be useful. What's in there?

Thanks squirreltape, I have fixed