Yesterday morning, a Cygnus resupply spaceship pulled into port at the International Space Station, loaded with more than 3 metric tons of science, food, and equipment. Cygnus will stay at the ISS for two months while astronauts unload and refill it with trash. After undocking, Cygnus will fly to a higher orbit, deploy some CubeSats, and fling itself back into the atmosphere for destructive reentry in July. But before the cargo ship departs, NASA and Orbital ATK, which builds and flies Cygnus, want to try something new: using the spacecraft's thrusters to boost the station's altitude. 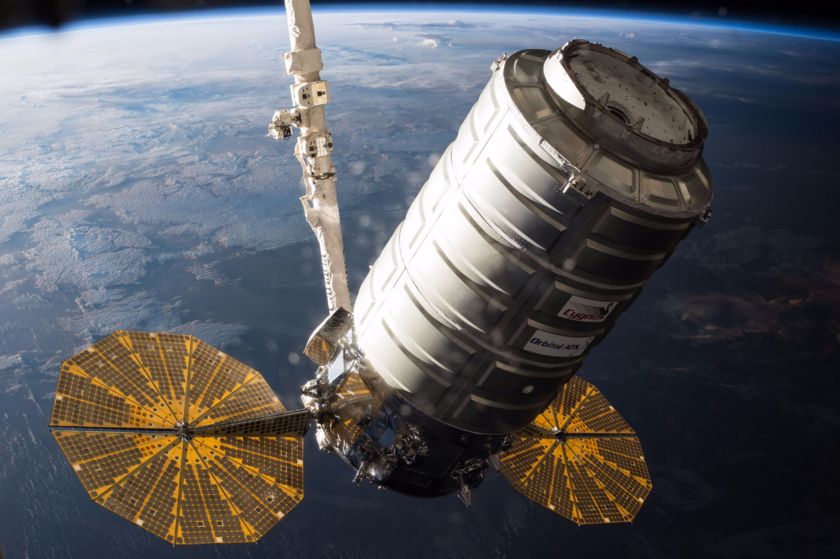 Orbital ATK named the OA-9 Cygnus the S.S. J.R. Thompson in honor of a former NASA deputy administrator and influential company executive who passed away in 2017.

Because the ISS is in low-Earth orbit, just 400 kilometers high, atmospheric drag continually slows it, dropping it back toward the planet. Visiting international cargo vehicles like Russia's Progress spacecraft periodically boost the station's altitude. But as NASA plans for the station's uncertain future, the agency may need its own reboost capability, as well as a way to eventually de-orbit the station.

"I think we can certainly in the future perform this service," said Frank DeMauro, vice president and general manager of Orbital ATK's advanced programs, in an interview. "Once this is demonstrated, then it's a candidate for de-orbiting some or all of the station."

DeMauro said that Orbital ATK approached NASA with the idea last year, and the agency was interested. Since then, engineers and managers have been trying to figure out how to test the capability. The plan is still being finalized, but DeMauro said the hope is to try it out during Cygnus's current mission.

Cygnus has 32 monopropellant maneuvering thrusters, and one large bipropellant, hydrazine and oxidizer-powered engine that delivers 100 pounds of thrust. The same engine is used on Orbital ATK-built geosynchronous satellites. For this test, the ISS will pitch over to orient Cygnus' main engine in line with the station's forward travel path, while the ship remains attached to the Unity module's Earth-facing port.

"Thrusting through node 1 (Unity) nadir does a pretty good job thrusting through the center of gravity," DeMauro said, "but it's not perfect." As such, thrusters on the station's Russian segment will also fire to keep the station properly aligned.

During the one-minute test burn, ground controllers at Orbital ATK, NASA and Roscosmos will monitor Cygnus and the ISS through the Tracking and Data Relay Satellite system. If there are any problems, the burn can be immediately stopped. Astronauts onboard the station won't be involved, though DeMauro said they may monitor the situation.

"This will really be a ground operation," he said.

If the test is successful, NASA might try again during the next flight. The agency and Orbital ATK are still discussing how to use the technique operationally. Cygnus already carries extra fuel in case of problems during rendezvous, as well as fuel to boost its orbit after leaving the ISS to deploy CubeSats. Cygnus commonly launches on the Antares rocket, but DeMauro said an Atlas V could loft the spacecraft to a higher orbit to begin with, saving even more fuel. The spacecraft's main engine could also be upgraded for increased power.

Cygnus has evolved since its introduction in 2013. Orbital ATK expanded the vehicle's pressurized volume and added more powerful solar arrays in 2015, following an Antares rocket explosion. It now regularly hosts autonomous science experiments, such as Saffire, which tested how large-scale fires spread in space. The current Cygnus vehicle carries a new avionics system, as well as a new communications platform NASA will eventually require for visiting vehicles. DeMauro said a Cygnus flying two missions from now will also demonstrate the ability to stay on orbit much longer after leaving the station.

"We've learned a lot about how the spacecraft flies," he said. "It has more capabilities than we originally thought."

If that comment by Lepton doesn't seem right, then think of it this way. In general if you think of aerodynamics working "forward", then think of spaceflight dynamics working in "reverse". In early space missions figuring out rendezvous the astronauts quickly learned that "gunning it" (accelerating) to the target docking vehicle resulted in the missing of the target by passing below. If they slowed then they climbed as the planet "pulled away" from them leaving them higher in the atmosphere. Another interesting point when orbiting, accelaration and breaking deltas take 180 degrees to be in effect.