The new concept features a slightly smaller rocket and spacecraft designed for a broader range of applications beyond Mars, including a Moon base and point-to-point Earth transport. SpaceX will eventually phase out its Falcon 9, Falcon Heavy and Dragon vehicles completely, relying on its new Mars architecture for all missions.

Today's plans are an evolution of the concept Musk revealed at last year's International Astronautical Congress in Guadalajara, Mexico. That presentation unveiled an audacious plan to place a million people on Mars in 40 to 100 years. The updated concept does not drastically depart from SpaceX's original plan, but does add insights into how the new rocket and spacecraft—which Musk estimated would cost $10 billion to develop—might be funded.

"The most important thing I want to convey in this presentation is that I think we have figured out how to pay for it," Musk said. 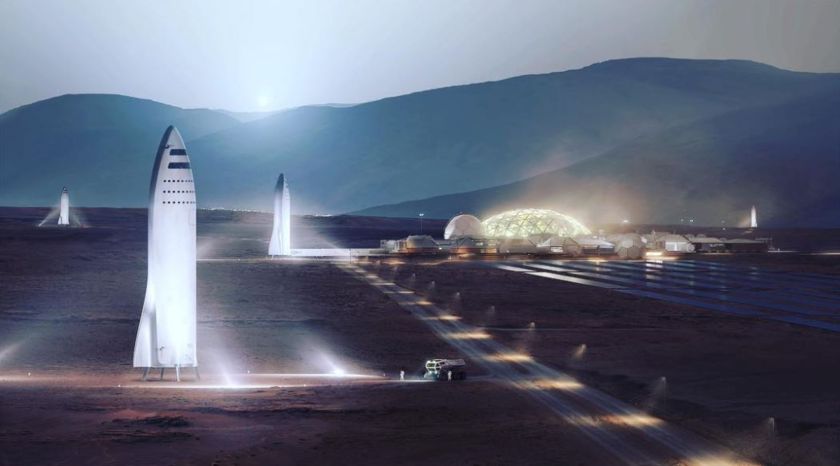 Musk's plan to colonize Mars revolves around a large rocket, codenamed the BFR, which blasts a spaceship carrying up to 100 people into orbit before returning to the launch pad for an upright landing. The rocket then blasts off again carrying a fresh load of fuel for the transport ship. Next, the colonists depart for Mars.

During landing, 99 percent of the vehicle's energy will be shed by trawling through Mars' atmosphere, Musk said, before a final landing burn settles the vehicle onto the Martian surface.

As for the booster itself, it is now shorter, smaller in width and equipped with less engines. This table shows how the vehicle concept has evolved:

In order to make the rocket affordable, Musk said SpaceX will rely on cost savings from reusability, as well as combining all of the company's vehicles into a single product line.

"We want to have one booster and ship that replaces Falcon 9, Falcon Heavy and Dragon," he said. "If we can do that, all those resources can be applied to this system."

Musk said the larger transport ship would enhance the company's core business offering: launching satellites. He showed off an artist's concept of a Mars craft deploying a supersized-version of the Hubble Space Telescope into Earth orbit, and also said the transport ship could capture defunct satellites and other space debris for return to Earth.

NASA currently plans to construct a small space station in lunar orbit called the Deep Space Gateway that could serve as a jumping-off point for commercial or international partners interested in landing on the Moon. There is speculation the Trump administration might direct NASA to get more involved with surface operations, leading multiple companies to present lunar vehicle concepts that could compete for government funding. Notably, Lockheed Martin presented a Mars lander of its own earlier today, and said the design was flexible enough for lunar applications.

Musk also said a single tank of fuel, delivered in Earth orbit, would be enough for the transport ship to travel to the lunar surface and return, without any surface mining.

A final, wildly ambitious revenue stream for the project could be point-to-point Earth flights. SpaceX released a new video depicting a 39-minute passenger flight from New York to Shanghai. 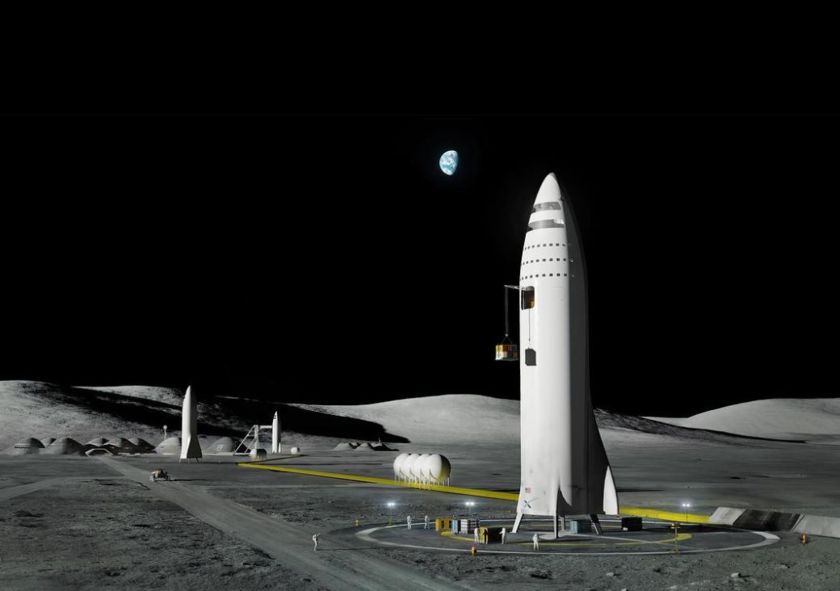 Like last year's talk, Musk's presentation was big on aspiration but short on detail. He spoke for less than an hour, and did not take questions from the audience.

SpaceX's previous plan called for landing its first transport ship on Mars in 2022. The timeline Musk gave today was similar; two cargo landers would land on Mars in 2022, with four vehicles launching in 2024. Two of those 2024 ships would be crewed, meaning, in Musk's timeline, humans could walk on Mars in just seven years.

"That's not a typo," he said. "Though it is aspirational."

SpaceX is known for its overly ambitious timelines. The company's yet-to-be-launched Falcon Heavy was originally slated to fly as early as late 2013. On average, major SpaceX predications are delayed by about two years.

Musk did, however, note the company was on track to launch up to 30 rockets in 2018—roughly half the world's missions. His goal of using that success to fulfill his Mars dreams does not appear to have diminished.

"Fundamentally, the future is vastly more exciting if we're a spacefaring civilization and a multi-planet species than if we're not," he said.

$10+ billion through cost savings? Why has NASA never thought of this? It would neatly solve the perennially problem of how to fund its Mars sample return project! As for that "BFR" title... Really? Big Fat Rocket? Is that the best they could come up with? How little respect do Mars rockets get! SpaceX could have picked something poetic or inspirational. Or even traditional. "Titanic" comes to mind. But instead they had to focus on her...um, girth. Even then they could at least have called her the LSR: the Lovely Svelte Rocket. Or the PPR: the Pleasingly Plump Rocket. But no, they had to label her "fat". One can almost imagine the tabloid headlines now: "Overweight Mars Rocket Takes Refuge in Hangar", "Musk Pleads with Obese Mars Rocket to Face the Cameras", "SpaceX Offers Rocket Weight Reduction Program to Go to Mars".

I dont think BFR stands for what you think it stands for...

I'm pretty sure that I don't want to live within 100 miles of New York City if they start launching and landing BFRs in the harbor. That place is already way too noisy, and how can you muffle the extraordinary roar of 31 rocket motors, much less the sonic boom of reentry?

Agree with Eric. And I'll believe all this stuff when I see it. Tesla's market is rapidly being invaded by a horde of hyper-price-competitive foes. Yet already it has yet to make a single $ return on absolutely colossal capital employed. When the tide goes out, Buffet's law, about seeing who has no clothes, may come into play. A possibly stupendous loss of credibility would be terminal for all this other, shall we say, optimistic stuff. (Agree with Matthew too!).

What I was surprised wasn't mentioned was the potential for orbital tourism and setting up and servicing an orbital hotel. This could even be expanded to trips to the moon. Another huge beneficiary could be planetary science with the much cheaper launch costs of robotic probes. As usual his timeline is laughable. I just hope SpaceX doesn't go bankrupt by retooling its factories and then finding the BFR needs far more development work than they anticipate particularly with the giant multi-use heat shield which needs to survive consecutive interplanetary re-entry to Mars and then Earth. Finally, it's disappointing that he can't come up with a more dignified name. How about BMFR or TMoaR? Or even , 'Thor' or 'Aphrodite'?

What are Musks plans for keeping his passengers alive on Mars? Bring your own camping gear? Oh, and don't forget to bring your own shielding from cosmic rays, there's not much atmosphere and no magnetic field to keep them out.

I think people are reading too much in to the idea that they will shut down the F9 to pay for the BFR. We are also somewhat over-dazzled by the Mars plans. I think that distracts from the real highlight of this rocket, and what makes it really fascinating, which is the massive planned payload to LEO combined with potential cost savings from full re-usability. If in-orbit refueling is achieved, and I think that will happen quite a bit later, then things really get spicy. But it's important to remember that SpaceX does not absolutely need for all that part to work before this becomes a financial victory for them.

Mars and Low Earth Orbit are both dead ends. Colonizing Mars is a ten year old flim-flam that has developed a toxic life of it's own. Emoting clueless sci-fi fans don't get it: Mars does not have enough gravity to keep humans healthy, too much gravity to make landing easy, and not enough solar power to run any kind of colony. Martians would live like naked moles rats praying their nuclear reactors keep running and dreaming of one thing- going back to Earth. The SpaceX fans started this propaganda/P.R. campaign almost ten years ago and now many people think it is real. It is not real, it is an infomercial advertising a company that was built with tax dollars almost from the ground up to provide a quick cheap ride to the ISS. No ride in sight but we have handed a hyper-loopy pay pal billionaire his own satellite launch company.