I was really into cars when I was younger, and by extension, car magazines. I particularly loved reading concept car articles, which came with glossy sketches and hyperbolic headlines like "Is this the next Corvette?" Sadly, I also learned production cars rarely end up looking their theoretical forebearers. Form usually gives way to function.

It's not much different in the space business. When NASA's Space Launch System was unveiled in 2011, it had a pearl-white paint job resembling the Saturn V Moon rocket. The initial artist's rendering, which featured an American flag fluttering in the foreground, was almost stunning enough to make casual observers forget the rocket was born out of one of the most contentious space policy debates of all time—one that continues to rage today.

Since then, SLS has evolved, and so has its paint job. The rocket's newest look, revealed a week ago, features black-and-white checkerboard patterns that will be used by tracking cameras to precisely measure the vehicle's position during ascent. The patterns are subtle on the core stage, but quite prominent on the solid rocket boosters, streaking down the sides like victory flags at a NASCAR race.

The new design isn't a poorly executed aesthetics attempt; the checkerboards have an important role to play in post-launch engineering analysis. And as the big rocket's form slowly yields to function, the patterns also serve as a reminder to NASA and its contractors that despite recent setbacks, the Space Launch System continues inching forward from design to reality. 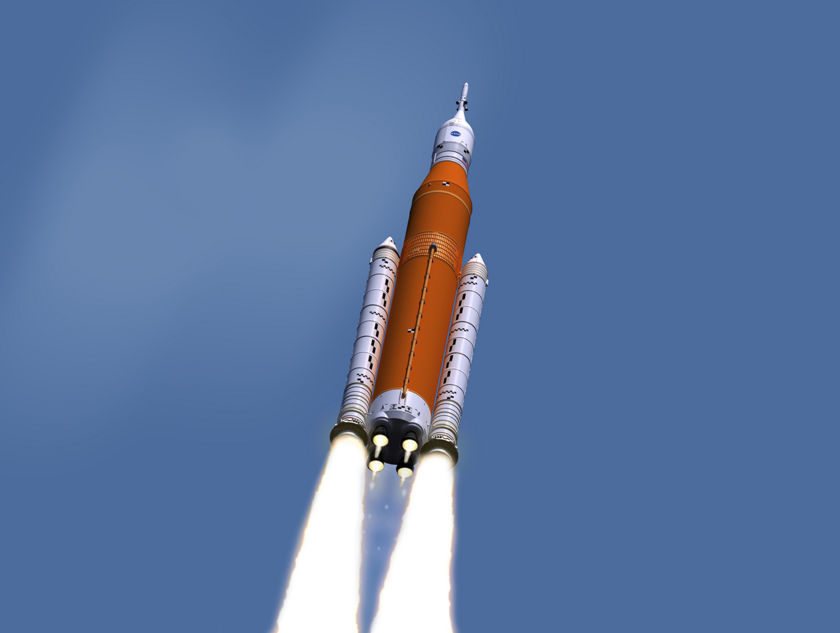 The Space Launch System, with its version 3 paint job.

The history of a paint job

Like the space shuttle's external fuel tank, the natural color of the SLS core stage insulation is light orange, which darkens to a rusty ochre after being exposed to sunlight.

Todd May, the director of NASA's Marshall Space Flight Center who served as the first SLS program manager, told me last year the decision to color the core stage white in initial artist's renderings was aesthetical. But the proposed paint job was so popular NASA briefly considered keeping it for benefits like moisture protection.

In 2015, following a key program review, engineers ditched the white paint, and the core stage returned to its natural color.  A pair of orange and grey swooshes also appeared on the solid rocket boosters. At the time, I questioned whether the swooshes would make it to launch day.

"After further evaluation, engineering needs required the high contrast checkerboards for the boosters because these markings provide valuable vehicle performance data," wrote representatives from Orbital ATK, the company that manufactures the boosters, in an email interview.

Apparently, the swooshes were never Orbital ATK's idea; they were added by a NASA artist. Charmingly, a photo released by Orbital ATK shows the new checkerboard pattern being applied using what looks like a household paint roller.

"It is indeed a standard paint roller that meets the qualifications to be used on an SLS solid rocket motor," officials said. 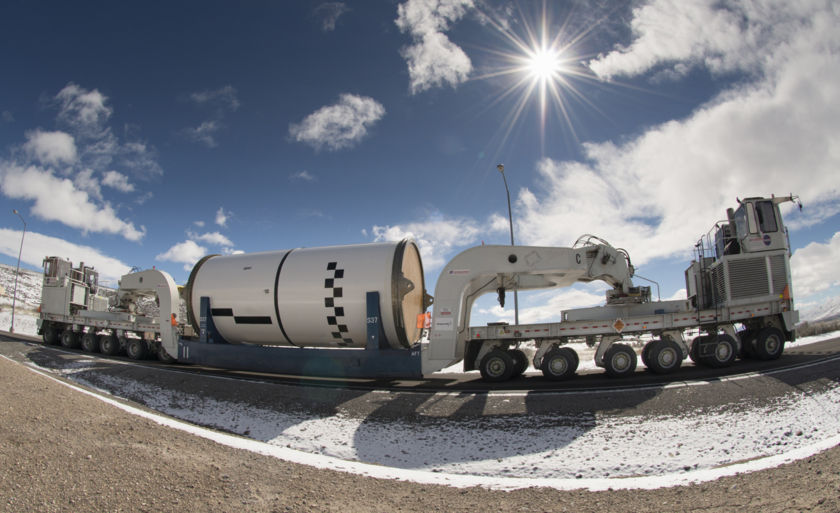 The importance of fiducials

Using fiducial markings to track a rocket is hardly new. America's first orbital launch vehicle, Juno I, had a diagonal stripe to help engineers see how much the rocket rolled on its horizontal axis. The Saturn V moon rocket had similar black-and-white markings for tracking purposes.

Over the years, the science of using imagery to determine distances between objects, called photogrammetry, has evolved. On the SLS boosters, the large vertical and horizontal checkerboard patterns (known as Style 4 and Style 5, respectively, if you were to look them up in an engineering manual) will be used by cameras mounted on the core stage to precisely measure how the boosters fall away from the vehicle after stage separation.

As a reminder, here's what onboard cameras saw when the solid rocket boosters popped loose from the space shuttle:

The space shuttle's solid rocket boosters fall away during the final flight of Atlantis in 2011.

The SLS boosters are essentially shuttle boosters with an extra propellant segment, making them the largest solid rockets ever flown. The oversized boosters present an interesting challenge: Engineers don't know for certain how they will fall away from the core stage.

"We have predictions, but exact separation path will depend on multiple factors," Orbital ATK representatives wrote.

During a rocket's ascent, it's prudent to shed spent stages as soon as possible, since extra weight drags the vehicle down. Even when empty, the SLS boosters weigh a combined 90 metric tons.

But shedding the boosters too early isn't wise, either. The lower the vehicle, the more atmosphere the boosters will have to push through, keeping them closer to the core stage as they start to tumble. Therefore, engineers and mission managers hope to precisely measure the boosters' behavior during the first flight in 2019 to help optimize models for later missions.

In addition to the large horizontal and vertical checkerboards, smaller markers will be used by ground cameras to measure the rocket's liftoff clearance with respect to its mobile launch tower.

Similarly, high-speed cameras around the pad were used to capture liftoff views during the shuttle program. This mesmerizing video from 2010 shows the kind of imagery engineers use to track a rocket launch. At around 23 minutes, check out the closeup view of the external tank and a solid rocket booster rising. Imagine this view with a checkerboard pattern on the booster, and you can see how it would be helpful for tracking the vehicle's precise motion.

That brings me to a related piece of a shuttle trivia: the booster "surge."

Notice how the shuttle's ascent here isn't uniform. The video's extremely high frame rate allows us to see how the booster and tank surge as if they are climbing stairs, because the thrust coming from the boosters isn't perfectly uniform.

All structures have natural frequencies—rates at which they vibrate—because of physics. For the space shuttle solid rocket boosters, this frequency was about 7 Hertz; for SLS, the longer five-segment boosters will result in a lower frequency.

Onward to the launch pad

All 10 of the booster segments for the first SLS flight have been cast with propellant at Orbital ATK's Promontory, Utah facility. Four of those segments are ready for shipment, but when that will happen is still fuzzy.

"They'll be shipped by rail upon NASA's request—current schedules show they are needed at KSC in fall of 2018, but ship dates have not been decided," company officials wrote. Separately, NASA public affairs officers told me there was no updated estimate on when SLS will launch, beyond the already mentioned target of 2019.

As for future flights, you should probably get used to the checkerboard patterns, because they'll be sticking around for EM-2, the second mission, which will carry a crew.

"The core stage and booster markings are expected to be similar to those for EM-1," said Orbital ATK representatives.