Early on in Star Trek VI: The Undiscovered Country, Kirk and Spock face off across an empty conference room. The Enterprise has just been assigned to escort the Klingon chancellor, Gorkon, to Federation space for peace talks. Kirk isn't happy, particularly with Spock, who volunteered the Enterprise for the mission.

"You know how I feel about this," Kirk says. "They're animals."

"Jim, there is an historic opportunity here," Spock replies.

"Don't believe them! Don't trust them!"

Kirk practically spits out the last line, and thus, The Undiscovered Country—which was released 25 years ago this month—sets off on a mission to tackle humanity's dark tendency to regard the nebulous "other" with hatred and suspicion.

I was ten when The Undiscovered Country was released. It was the first Star Trek movie I saw in a theater. My fondness for the film has grown over time, as I've been able to appreciate the richness of the storyline and the depth of the issues the creators were trying to tackle.

The Undiscovered Country is the last Trek movie to feature the original cast, and it provides them with a fitting sendoff. The movie is action-packed, with top-notch special effects and a dramatic plot that involves the most well-known race in the Star Trek universe: the Klingons. The Undiscovered Country also serves as an allegory for the end of the Cold War, and the social topics the film explores are still relevant today.

The plot of The Undiscovered Country is fairly straightforward: The Klingon moon Praxis, a key energy production facility, explodes due to overmining and lax safety protocols. The accident deals a devastating blow to the Klingons' economy, to the point where they can no longer sustain their military-oriented society. They are left with two choices: Wage an all-out war with the Federation, or sue for peace.

The elder chancellor Gorkon—a progressive among a warrior race—chooses peace. The Federation, while skeptical, agrees to cease hostilities and open negotiations. But there are factions on both sides that would prefer war, leading to an interspecies conspiracy to disrupt the peace process. Naturally, the crew of the Enterprise and Captain Kirk, who despises the Klingons for murdering his son, find themselves at the heart of the conflict.

In 1989, two years before The Undiscovered Country was released, the Berlin Wall fell. Following that, the Soviet Union's grip on Eastern Europe loosened, leading to the gradual spread of democratic independence movements. Multi-party elections were held in the Soviet Union in May 1991, and on Christmas Day, less than three weeks after Star Trek VI hit theaters, the Soviet flag was lowered at the Kremlin for the final time.

The parallels are obvious: In both cases, a decades-long standoff between two superpowers was at an end. The "undiscovered country"—a phrase from Shakespeare's Hamlet—refers to an uncertain future where peace prevails.

Peace, unfortunately, can be just as hard as war. In the movie, a cloaked Klingon vessel fires on Gorkon's flagship and assassinates him, implicating Kirk and the Enterprise in order to incite a war. Similarly, in August 1991, the Soviet Union's communist party staged a coup, which failed and hastened the union's collapse.

Ironically, the biggest post-Cold War success story for the U.S. and Russia is the International Space Station; space, once an arena for competition, became a haven for cooperation. But back on Earth, relations between the two nations have hardly been rosy during the past 25 years. With Russia now incriminated in having interfered with the 2016 U.S. election, relations between the two nations probably won't thaw anytime soon.

"We must do this again."

During a private moment between Gorkon and Kirk, the Klingon says, "You don't trust me, do you?" After Kirk assents by not responding, Gorkon says, "I don't blame you. If there is to be a brave new world, our generation is going to have the hardest time living in it."

This message of confronting change is more timely today than it was in 1991. Among other reasons, the election of Donald Trump can be seen as a backlash against globalization, changing demographics, progressive societal reform, and the perceived marginalization of rural America. Taken a step further, this can be generalized to a fear of the "other."

That fear often cuts in many directions, from all sides of a conflict. During The Undiscovered Country, an awkward diplomatic dinner aboard the Enterprise should be familiar to anyone who has ever shared a meal with far-flung friends and relatives. Add alcohol to the mix—in this case, Romulan Ale—and things are bound to get interesting.

The Klingons, we are shown, aren't sure what to do with their napkins, and chew with their mouths open.

"Did you see the way they eat?" Lieutenant Uhura asks later.

The implication? The Klingons are doing it wrong. Their table manners are the vanguard of their backward ways, which supports the notion that the Federation has the moral high ground.

But herein lies the problem: It's easy to draw a line in the sand and say that the Klingons shouldn't be allowed to rampage through the galaxy conquering other species. It's much harder for the humans to connect with them, understand their culture, consider their motivations, and find a way to bridge the vast divide between the two races.

One sequence at dinner particularly captures this notion:

Chekov: "We do believe all planets have a sovereign claim to inalienable human rights."

Gorkon's daughter, Azetbur: "Inalien—If only you could hear yourselves. Human rights—the very name is racist. The Federation is no more than a homosapiens-only club."

Brigadier Kurla: "In any case, we know where this is going—the annihilation of our culture." 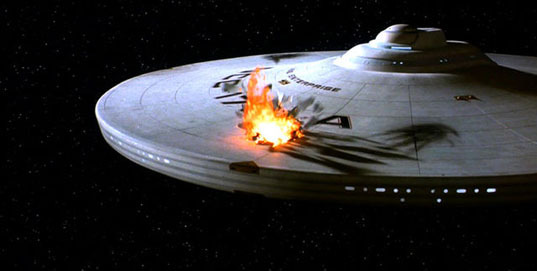 "She's packing quite a wallop!"

The Undiscovered Country is unapologetically peppered with literary and historical references, without concern for whether the audience can follow. This risks giving the film an air of elitism, but director Nicholas Meyer is able to balance the effect fairly well. Though he turns the Klingons into overbearing Shakespeare fans—particularly the protagonist, General Chang—Meyer provides some relief when he gives McCoy the line, "I'd give real money if he'd shut up."

Among the historical allusions in the film are references to Hitler and China, as well as a deep-cut quote from U.N. Ambassador Adlai Stevenson during a 1962 Cuban missile crisis hearing: "Don't wait for the translation—yes or no?"

The Undiscovered Country is also just great sci-fi. The final battle featuring the Enterprise, Excelsior and the rogue Klingon ship sits among the Trek franchise's top cinematic moments. Spock's logic-driven investigation of the conspiracy represents Leonard Nimoy at his finest, and his Vulcan protégé, Valeris, is wonderfully portrayed by Kim Cattrall. And like any good Trek flick, there are cheer-worthy, campy moments from William Shatner, including a "Fire!" facial closeup, and an air-tackle of the Federation president to avoid an assassin's laser.

Kirk's final soliloquy to the Klingon and Federation diplomats leaves a little to be desired; beyond saying "people can be very frightened of change," the speech doesn't address the larger question of how to combat prejudice. In some final remarks on the Enterprise bridge, the crew at least seems to admit they may have judged the Klingons prematurely. They'll have plenty of time to reflect, since the Enterprise has been ordered back to port for decommissioning.

Thus ends the original Star Trek series. True to his character, Kirk doesn't miss one last chance to thumb his nose at Starfleet, by ignoring orders to head home and instead commanding the Enterprise to head for the "second star to the right, and straight on 'till morning."

I watched Star Trek 1st episode a bit more than 50 years ago, and that last movie 25 years ago. How time flies, never to come back.

From a cinematics point of view, the explosion of Praxis became a much imitated icon for a decade or so (Stargate, Independence Day, etc) - to the point where even the remastered Star Wars (original trilogy) movies added in a Praxis-style explosion to the destruction of the Death Star. IMHO that was its "jumping the shark" moment. The effect has even earned itself a Wikipedia article: https://en.wikipedia.org/wiki/Praxis_effect I know there's some criticism of the concept of a planar explosion in space, but it's not entirely absurd. One just has to posit that the source of the energy has extreme angular momentum.

Fascinating, Karen! I didn't know about this.