Tomorrow, at precisely one minute before midnight, Eastern Daylight Time, three crew members will be back on Earth from the International Space Station. Their Soyuz capsule will plop down in Kazakhstan, where it will be mid-morning. NASA's Kate Rubins, Anatoly Ivanishin of the Russian space agency Roscosmos, and Takuya Onishi of the Japan Aerospace Exploration Agency will take their first breath of fresh air in 115 days.

Back in August, Rubins, who is formally Dr. Rubins, the holder of a Ph.D. in cancer biology from Stanford University, became the first person ever to sequence DNA in space. She has been an astronaut since 2009, but didn't necessarily set out with that job in mind—instead, she has simply followed her scientific interests, building an impressive resume along the way.

"I have not particularly tried to go in any direction in my career," she said from orbit recently, speaking with Francis Collins, the director of the National Institutes of Health. "I actually applied to become an astronaut while procrastinating a little bit on writing an R01 grant application."

Given her background in molecular biology, NASA tasked Rubins with handling the DNA sequencing experiment. The agency believes the technology has a variety of applications, but the first step was just seeing if it would be possible at all.

"We did not know if it was going to work," Rubins said. "Like every lab experiment, you put your pipettor down, and give it a try." 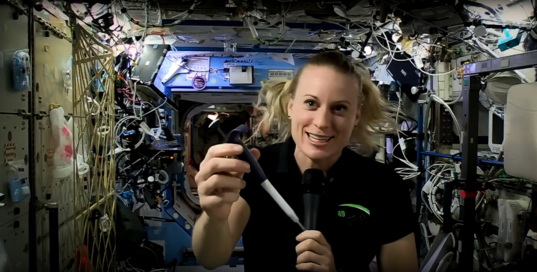 Kate Rubins became the first person to sequence DNA in space during Expedition 49.

DNA, for the uninitiated

DNA, or deoxyribonucleic acid, is a string of chemicals inside a cell nucleus. This string tells a cell how to turn amino acids into proteins. Proteins, in turn, go on to build more cells. In humans, cells make up tissues, tissues make up organs, and organs make up our bodies.

That makes DNA the blueprint for any particular living thing. To sequence a strand of DNA is to determine the order of its chemicals, which are adenine, guanine, cytosine and thymine. These chemicals are represented by the letters A, G, C and T. (Helpful memorization technique: the film title GATTACA comes from these letters.)

Why sequence in space?

One of the most common uses for sequenced DNA is tracking and identifying diseases. If sequencing DNA in space became a trivial matter, astronauts on a multi-year mission to deep space would have a powerful tool to help doctors back on Earth diagnose illnesses.

Secondly, potentially harmful microbes growing inside a spacecraft could be identified and monitored. On Earth, mold growth can affect air quality and damage your house. Among other remedies, the Centers for Disease Control and Prevention recommends you combat mold by opening windows and doors to let in fresh air. Obviously, you can't do that in space.

Astronauts in space can battle microbes with disinfectants, and fight off infections with antibiotics. But since a run to the drug store is out of the question, supplies must be packed and rationed carefully. That makes using a DNA sequencer for identification purposes compelling. To make better inventory choices, scientists are already studying what grows on the International Space Station's walls.

There's a also a third, more exciting use for in-space DNA sequencing: the detection of extraterrestrial organisms. Suppose a future Mars crew retrieves a sample of something that looks like life. Could a DNA sequencer help make a positive identification? Possibly—even if it looks nothing like the DNA we see on Earth.

"You're really looking at something that's got capability potentially to analyze things are nucleic acid-ish, that might not be exactly resembling human DNA," Rubins said. 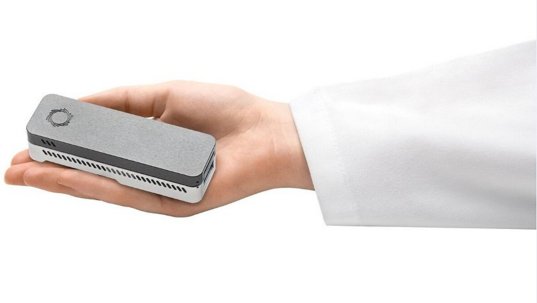 Rubins performed the DNA sequencing experiment with a palm-sized sequencer called the MinION (pronounced "min-ion", I learned, unlike the pronunciation used for the adorable yellow minions from Despicable Me). The device is made by the U.K.-based Oxford Nanopore Technologies.

You can get your own MinION starting for $1,000. The little device has electrically charged pores through which a DNA sample can pass. As different DNA molecules travel through the pores, they disrupt the electrical signal by various amounts. These disruptions can be converted to the A-T-C-G patterns of a DNA strand.

The device works well enough on Earth, but in microgravity, scientists were worried about the introduction of air bubbles, which could block the device's tiny pores. Fortunately, that appears not to have been a problem.

"We were able to show that we can successfully do sequencing in space," Rubins said. "We've sequenced over a billion base pairs at this point."

"A billion base pairs already?" replied Collins, the NIH director, during the discussion. "That is pretty phenomenal. That's like one third of a human genome."

For this initial experiment, Rubins sequenced samples of pre-prepared mouse, virus and bacteria DNA, while researchers on the ground conducted the same experiment simultaneously to compare results. During the next phase of the project, scientists want to try the entire process end-to-end, including the collection and preparation of a sample aboard the ISS.

Rubins is already way ahead. Among the few, precious, personal items she was allowed to bring into space, she packed some pipettes, and spent some of her free time testing out sample collection and preparation.

"[I] have actually found that pipetting and the standard methods of moving things around ... works very well up here, which was extremely surprising to me," she said, with the flair of a scientist's fascination. "That was not my hypothesis."