In 1969, Neil Armstrong and Buzz Aldrin stepped onto the lunar surface, into the history books and then set out to do some science. Among the experiments they deployed on the moon was the Laser Ranging Reflector, a toolbox-sized array of small mirrors. LRRs were also deployed during Apollo 14 and 15, and for decades, scientists on Earth have beamed lasers at these mirrors and measured how long it takes for the reflection to come back. The activity, likened to shooting a moving dime with a rifle from three kilometers, refined the distance between Earth and the moon to a staggeringly tiny three-centimeter margin of error.

When LightSail launches into space next year, a similar technique will be used to measure how the spacecraft’s orbit changes over time. It’s a job best fit for corner cubes, the same, segmented, concave mirrors that were left on the moon. If we’re going to tell the world the gentle push of sunlight raised our orbit by a few dozen kilometers in just two months, we need extremely accurate measurements. 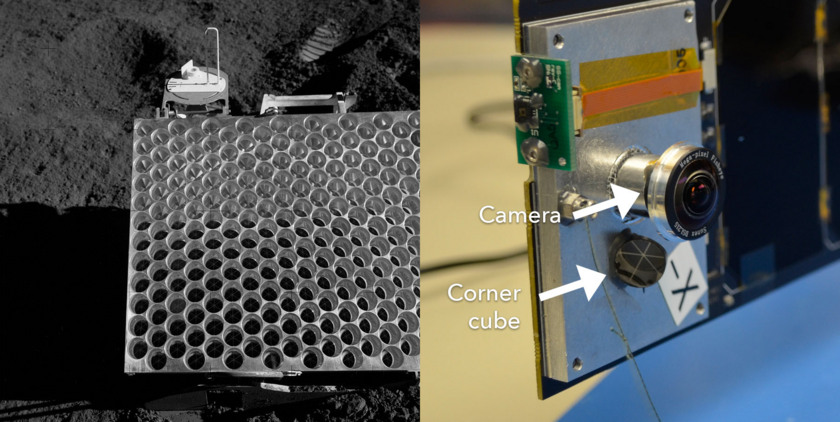 LightSail already has a few corner cubes, but they’re in hard-to-zap places; during the test mission, no laser ranging attempts were successful. For the second flight, new corner cubes have to be installed. But with real estate on a 10-by-10-by-30 centimeter spacecraft at a premium, where do you fit new hardware?

On the outside of the spacecraft.

Ecliptic Enterprises Corporation’s Riki Munakata has revealed the draft design of a cluster of six corner cubes that will stick off the bottom of the spacecraft, beneath the solar sail: 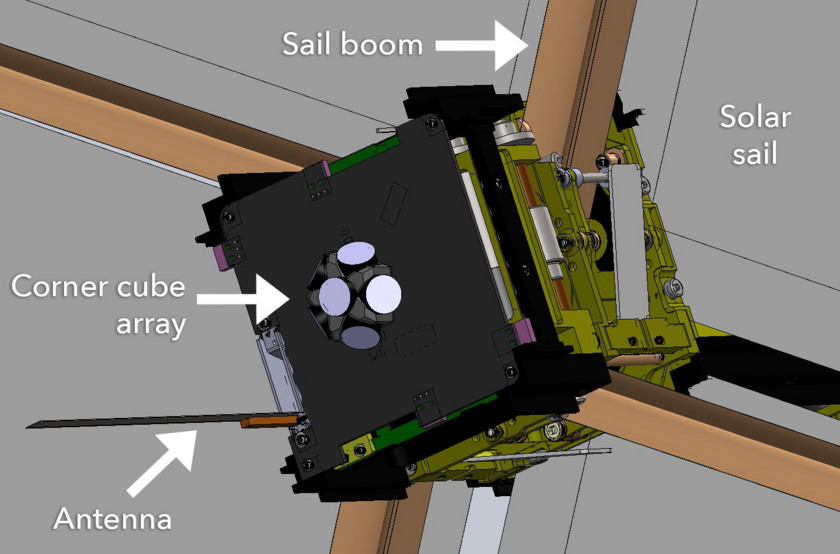 This draft design of LightSail's new corner cube array shows the underside of the spacecraft, beneath the deployed solar sail.

Surprisingly, this extension to the spacecraft's exterior still complies with CubeSat standards. LightSail rides to space inside a Poly-Picosatellite Orbital Deployer, or P-POD. The P-POD, in turn, is bolted into LightSail’s partner spacecraft, Prox-1. The P-POD’s spring—roughly the size of a coiled Slinky—pushes LightSail into space when the pod’s door opens.

Although P-POD sizes dictate CubeSat dimensions, the cylindrical space inside the pod’s coiled spring is open and available. The use of this space was pioneered by other CubeSat groups, and is now a part of Cal Poly’s CubeSat standards. LightSail’s new corner cube array will be the latest piece of hardware to take advantage of this extra P-POD storage, fitting snugly within the coiled spring prior to deployment.

To install the corner cube array, Ecliptic plans to replace LightSail’s two aft solar panels with an aluminum plate. This is not expected to have a major impact on the spacecraft’s power budget. In LightSail’s cube configuration, the spacecraft has 26 additional solar panels. In the sails-out position, up to 50 will still be available—and when LightSail is pointed at the sun, the aft panels are blocked by the solar sail anyway.

An initial prototype of the array has already been completed. Ecliptic engineers plan to verify the design, confirm the expected impact to the power budget and then remove the aft solar panel to begin implementation.

Hi Jason, I'm just curious, as the other retroreflectors (pictured on the test mission blogs) on Lightsail look familiar, but are the other ones being done in conjunction with Ames? I'm a JPLer now, but prior to that I managed a University of Texas Spacecraft called ARMADILLO, which is flying retroreflectors as a tertiary payload. A few of us also designed the Prox-1 propulsion system (its a 3D printed cold gas thruster, pretty cool if you haven't seen it yet!). Anyways, I was just curious, as it looked like the other reflectors might be the same model as ours. Best, Cody Colley

Hi Cody, I'm not sure about the original reflectors that sit throughout the spacecraft, but they would have been done under the direction of Stellar Exploration. The new ones are being designed in-house by Ecliptic Enterprises. We do have a NASA Ames connection through a subcontractor, Boreal Space, which is headquartered at the Ames office park. I haven't seen Prox-1 in person yet, but they are building the flight structure, and I should get a chance to see it later this year. I'm looking forward to spending some time at Georgia Tech and getting to know that side of the mission better. Jason