The white cloud of steam and rocket exhaust shot quickly down the flame bucket, expanding and hissing as it mingled with the pale, blue Mississippi sky. From a vantage point less than a half-mile away, the sound arrived almost instantaneously: A thundering roar that pitched up and down, up and down. 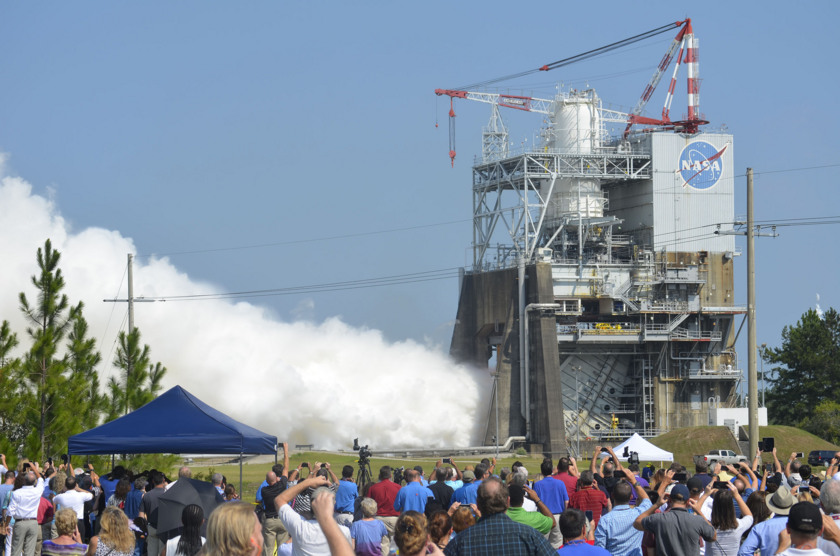 The cloud came from the mouth of test stand A-1 at Stennis Space Center, where NASA has been testing rocket engines since the dawn of the space age. The engines that powered the Saturn V, the biggest rocket ever built, were once tested here, and the engine type currently bolted into the stand—the RS-25—will propel another big rocket, the Space Launch System. SLS, NASA’s heavy lift vehicle for carrying humans and cargo to lunar orbit and beyond, will evolve over the years to out-muster even the Saturn V in power.

The engine was slated to run for 535 seconds—the amount of time it takes to lift the SLS upper stage to a spot where it can push onward to orbit. The first payload will be the Orion crew capsule—sans crew—bound for a lunar orbit shakedown cruise. The flight is scheduled to happen no later than November 2018.

The RS-25 nozzle was barely visible within the mammoth, concrete and metal test structure and as the source of the nine-minute fireworks display. The engine runs on liquid hydrogen and liquid oxygen, and its by-product is largely water vapor. This superheated exhaust funnels through a deluge of water used for cooling and sound suppression, creating the roiling steam cloud.

Several hundred NASA employees, media representatives and social media invitees were on hand for the test. Watching an actual rocket launch is so fast and breathtaking, you can hardly look away; here, the nine-minute event allowed enough time for photographers to readjust cameras and capture alternate angles.

This was the sixth and penultimate firing of RS-25 development engine 0525, which is not intended for flight. The first trial occurred in January, and after a long rain delay this spring, NASA is poised to finish the entire test series before the close of fiscal year 2015 as scheduled (the agency says the final test is tentatively scheduled for August 27). That’s a bright spot for SLS, Orion and the ground systems office—all of which have been hard-pressed from a scheduling standpoint.

Flying in sets of three, the RS-25 powered the space shuttle to orbit for 30 years. For SLS, that number increases to four-at-a-time; eight leftover shuttle engines are already picked out for the first two SLS flights. That will deplete NASA’s stock by about half. SLS core stages are jettisoned into the ocean, whereas space shuttles brought their engines back to Kennedy Space Center for reuse. Aerojet Rocketdyne, the engine manufacturer, is already working on a cheaper, expendable version dubbed the RS-25E.

The engine's four turbopumps fell silent, stopping the flow of compressed fuel and oxygen. The engine gently flamed out with a final burp, and the test was over. A cheer went up from the spectators as the steam cloud began dissipating. Photographers packed up their gear, the crowd broke into excited chatter and the Mississippi bayou was quiet once more.

50 years after Apollo, the "ferrarri" is only 1/3 the power of the Saturn V. Way to go NASA. Hope this one is better than the last "ferrari" called the shute.e

Not sure what you're referring to danbarb. SLS is more powerful than the Saturn V in terms of thrust at liftoff, though not as capable (yet) in terms of payload to LEO (or elsewhere), but not by a third. It'll surpass the Saturn V eventually, if things go to plan and SLS is funded and cared for properly by Congress.

A great step towards turning the reusable Space Shuttle main engine into a non-reusable version!

I was glad to see this test seemed to be successful but I would be glad if these rocket engines can be reused too but at least they should be carrying astronauts much further into space than the space shuttle. I hope the next president and congress will continue to fund the Space Launch System at good levels but that they will more seriously consider landing on the Moon as one of the immediate destinations of it such as in the early 2020s and not be so focused on a rock from an asteroid as the only immediate target. I also hope that NASA solves the problems with the parachutes with the low density supersonic decelerator. I hope that Space X and the private American space companies get back to more success soon as well. I hope that NASA can land people on Mars before the late 2030s as the ultimate use of the Space Launch System perhaps with a larger NASA budget.

It still does not compare to the Ares V rocket (formerly known as the Cargo Launch Vehicle or CaLV) from the (now cancelled) NASA Constellation program. https://martianchronicles.wordpress.com/2009/01/14/what-the-ares-v-rocket-could-do-for-astronomy/ https://en.wikipedia.org/wiki/Ares_V http://appel.nasa.gov/2010/01/01/rocket-science-dialogue/

@Eltodesukane But size isn't everything. Ares V was not to be human rated, SLS will be. SLS is a replacement for both Ares I and Ares V. Bolded told Congress that each crewed launch of Ares I would cost $1.6 billion (about ten times as much as Soyuz today!) and would not operate until 2017. I think Ares ran into severe problems and that a major redesign was necessary one way or another, and SLS is the result. This is hard for both technical and administrative reasons.