This evening in Mississippi, a space shuttle engine roared to life for the first time since 2011.

NASA's Stennis Space Center completed a 500-second firing of the RS-25 engine, giving engineers a chance to test a new engine controller and monitor temperature and pressure readings throughout the system. Once a reusable workhorse used to send space shuttles into orbit, the RS-25 is now slated for installation on the core stage of NASA's heavy-lift Space Launch System, scheduled to debut in 2018. The hot-fire, which was conducted on Stennis' A-1 test stand, ran for the full eight-and-a-half-minute target duration.

Eighteen RS-25 engines are left over from the space shuttle program. Sixteen have flight experience, while two are used exclusively for testing. Today's test was made with development engine 0525.

While the space shuttle used three RS-25 engines to reach orbit, the Space Launch System is designed to operate with four. According to NASA, each RS-25 generated about 490,000 pounds of thrust during the shuttle era. That number is expected to increase to 512,000 for the Space Launch System's first four flights. A new engine controller, which is responsible for relaying commands between the rocket's avionics systems and engines, was also put through its first live test.

NASA intends to begin using expendable versions of the RS-25 after clearing its inventory of leftover shuttle engines. The agency plans to work with Sacromento, Calif.-based Aerojet Rocketdyne, which built the original shuttle engines, to make the new version more affordable. 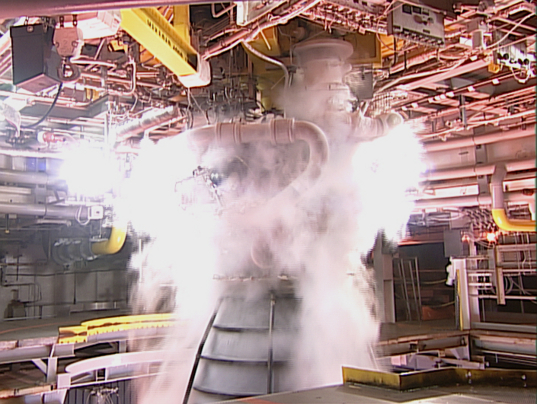 An RS-25 engine sits in NASA's Stennis Space Center A-1 test stand during a full duration, 500-second firing on Jan. 9.

"We had identified significant cost and time saving ideas for the RS-25 before the shuttle program ended," said Steve Wofford, the manager of the SLS liquid engines office at Marshall Space Flight Center, which oversees development of the Space Launch System. "We see many opportunities for process and manufacturing savings with the change to an expendable engine and the maturation of technologies, such as 3D printing and structured light scanning."

Today's test was the first time an RS-25 had been fired at Stennis since 2009. A total of eight tests are planned for engine 0525, totalling almost an hour of firing time. The second test is scheduled for April 2015, after engineers complete upgrades to the A-1 test stand's water cooling systems. The second RS-25 development engine will also undergo testing—10 firings in all, totalling 75 minutes. 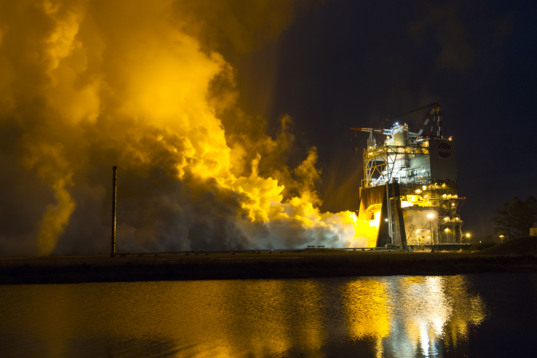 An RS-25 engine fires for 500 seconds on the A-1 test stand at NASA's Stennis Space Center near Bay St. Louis, Mississippi.