It's been a busy year of engine testing at NASA's Stennis Space Center in southern Mississippi. Since January 9, the RS-25 testing engine once used for the space shuttle program and now repurposed for NASA's new rocket, the Space Launch System, has fired five times. Steam clouds have billowed into the bayou for 44 minutes since the test firings began.

Thursday afternoon, the engine will come to life once again for test number six, the penultimate run of a campaign designed to see how the RS-25 behaves under the guidance of its new SLS engine controller. Four RS-25 engines are used to power the core stage of SLS. Thursday's test is expected to last 535 seconds.

"No single test has objectives that are totally unique to that test," wrote NASA officials to The Planetary Society. Test number six will continue to explore engine performance, with thrust levels being dropped as low as 80 percent. "Engine controller and software performance will be monitored. Propellant flow and stability data will be collected," the statement said.

I'll be watching live at Stennis and posting updates to Twitter. NASA TV coverage starts at 4:30 p.m. EDT (20:30 UTC), with the test expected to begin at 5:00. For starters, here's a montage of the first five engine tests. I bumped part of the video's frame rate to 720 percent in an effort to keep the video less than two minutes long:

On August 13, NASA will conduct the sixth of seven planned test firings for the RS-25 engine, which powers the Space Launch System. Here are the first five tests. The frame rate for part of the video has been increased to 720 percent.

After Thursday's hot fire, just one more development engine test is expected at stand A-1. Next, engineers will individually test the engines slated to fly on the Space Launch System's second voyage, a crewed trip to lunar orbit. Then, the four engines bound for the first SLS flight will be integrated into the vehicle's core stage. The entire rocket will be installed at stand B-2 for a complete test firing before NASA ships the stage to Florida for launch. The first flight of the Space Launch System is expected no later than November 2018. 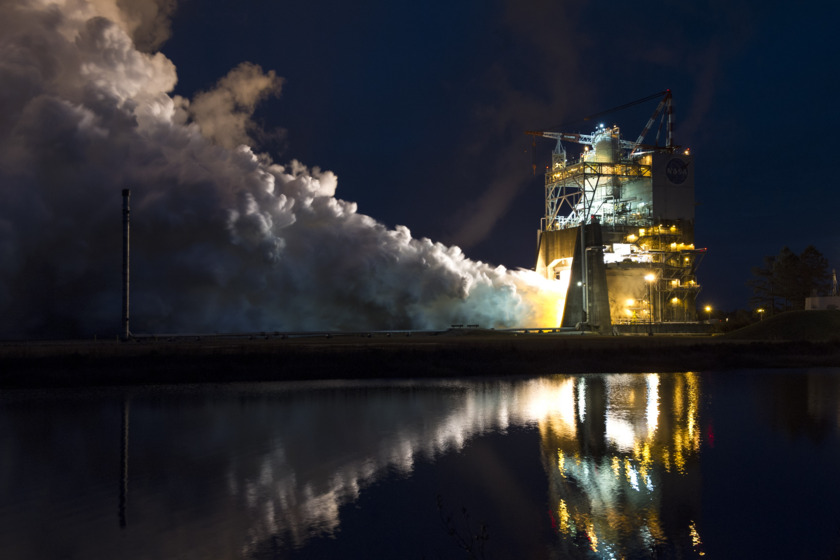 Smoke billows from the Stennis Space Center A-1 test stand during an RS-25 engine test on Jan. 9.