A pesky radio problem that has occasionally stymied The Planetary Society’s LightSail spacecraft has returned, causing the mission's day-in-the-life test to be temporarily scrubbed. On Wednesday, Aug. 20, most of the spacecraft’s contractors and stakeholders gathered at Cal Poly San Luis Obispo for a simulation of how LightSail will work in space. Instead of proudly unfurling its solar sails for the first time in two years, the CubeSat went quietly back into its storage case. It’s now at Ecliptic Enterprises Corporation in Pasadena for troubleshooting.

The spacecraft in question is LightSail-A, scheduled for a possible May 2015 test flight aboard an Atlas V rocket. If it flies, LightSail-A will be a precursor to LightSail-B, the full-fledged solar sailing mission expected to launch in 2016. Wednesday's scrub was a disappointment, but as the day concluded, spirits were high that the radio can be fixed in time for another day-in-the-life test attempt sometime before October 1, when all testing is scheduled to be finished. 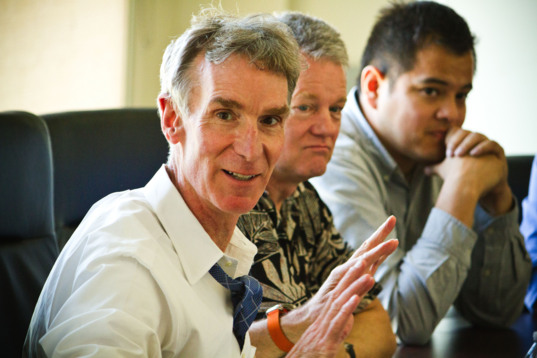 The LightSail team discusses whether or not to scrub the spacecraft's day-in-the-life test on Aug. 20, 2014. From left: Bill Nye, Rex Ridenoure and Alex Diaz.

Preparing for the DITL test

As I previously reported, LightSail-A blew out its radio amplifier in late July. At the time, the problem was believed to be caused by inadvertent radio transmissions while the antenna was either stowed or not attached. At Ecliptic, LightSail received a brand new radio, and its old one was repaired for use as a testing spare. Last week, both the new and repaired radios appeared to be transmitting normally. But the moment of truth had to wait until the spacecraft made its way to Cal Poly, where it would talk to its ground station.

Mysteriously, the new radio from Tyvak Nano-Satellite Systems looked different than the old one. Upon asking Tyvak for an explanation, the team was assured the internal circuitry of the board had not changed. As far as the schematics were concerned, the radio boards were identical. Nevertheless, the new radio was unable to receive signals from BenchSat, LightSail's engineering test model that also doubles as a makeshift ground station. After discussions with Tyvak, the team believed a software driver update might fix the problem. Spacecraft software drivers work like the ones on your computer—they provide instructions on how the software should talk to the hardware.

But with Wednesday's day-in-the-life test rapidly approaching, the team decided to reinstall LightSail's repaired radio, which was able to communicate with BenchSat in both directions. LightSail was taken to Cal Poly earlier this week. Teams from Cal Poly, Ecliptic and Stellar Exploration—the original spacecraft manufacturer—set up LightSail's portable deployment table, which supports the 32-square-meter sails as they deploy. Justin Foley, LightSail’s Cal Poly team lead, shot a great timelapse video of the table being put together:

It takes approximately two hours to assemble LightSail's portable deployment table. This timelapse was shot prior to the spacecraft's planned Aug. 20 day-in-the-life test.

The day of the DITL test

On Wednesday morning, the rest of the LightSail team convened at Cal Poly. Representatives from Stellar included Chris Biddy, who led most of the original sail deployment system design and construction. From Ecliptic, which is overseeing LightSail integration and testing, we had team lead Riki Munakata and CEO Rex Ridenoure, as well as other staff members. Two of Ecliptic’s contractors, Barbara Plante of Boreal Space and Alex Diaz of Half-Band Technologies, were present. Project manager Doug Stetson was on hand. A handful of Cal Poly staff, including Justin Foley, provided ground station testing and technical support. Finally, Georgia Tech's Dave Spencer, the principal investigator of the Prox-1 spacecraft, spent most of the day participating via phone.

From The Planetary Society, CEO Bill Nye and COO Jennifer Vaughn joined. We invited Executive Director Emeritus Louis Friedman to observe and offer input. And, of course, there was me, as well as Loren Roberts, our longtime design and multimedia contractor. The Planetary Society caravan left Pasadena for San Luis Obispo at 6 a.m. Lou and I arrived first and were greeted by Doug Stetson, who caught us up on the radio problem. We found LightSail-A in a Cal Poly clean room, isolated behind dust and static prevention curtains as the team worked on the problem using BenchSat.

Here's what was happening: Despite the fact that the radio appeared to be working normally at Ecliptic, end-to-end tests with the ground station revealed the signals coming from the spacecraft were far weaker than they should have been. The RF signal was measured at just one-fourth of a watt—the expected strength is a full watt. Further analysis showed the radio was also drawing too much power from the spacecraft's battery. A normal power draw is 2 watts, but the team saw more than double that at one point.

An unexplained excess power draw is dangerous. To understand why, think of a simple electric circuit in your home. The power company provides all the power you want, and doesn’t particularly care what you do with it. As you plug things into the circuit, more power is drawn through the copper wires in your walls. All that power creates heat, and too much can start a fire. That's what a circuit breaker (or fuse box) is for. It's a failsafe designed to cut power to a circuit that is drawing too much power. If you’ve ever tried to run too many appliances on the same circuit, you’ve probably seen this failsafe in action when the power suddenly went out.

LightSail has no circuit breaker. If the radio draws too much power, the circuit will heat up until something fries. The radio's job is to take power and send it out the antenna in the form of radio waves. If the antenna is coiled and stowed, or not attached at all, all that power has nowhere to go. It was believed that this had previously caused the radio amplifier to blow.

Due to their previous experiences with the amplifier, the team has been extremely careful to keep the radio from transmitting with the antenna stowed or disconnected. What the team saw Wednesday looked like the precursor to another blown amplifier—too much power was coming in, and not enough was going out. 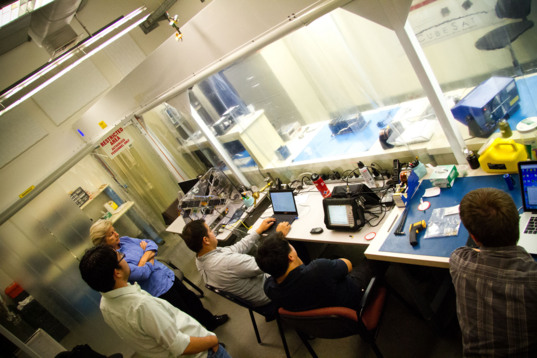 LightSail engineers and Cal Poly staff test the spacecraft's radio system at a Cal Poly clean room. The LightSail 1 3U CubeSat can be seen sitting on a blue pad behind the plastic curtains that form a dust-and-static free zone.

The decision to scrub

Whatever the cause of the radio problem, it became clear that it wasn’t going to be solved on Wednesday. So the next question was whether or not to disconnect the radio and proceed with a sail deployment test. The radio isn't required in order for the sails to deploy. In fact, LightSail has contingency modes that account for this exact scenario. All of the spacecraft's critical functions operate on a timer. After LightSail is ejected from its P-POD—the spring-loaded container attached to the rocket—it automatically de-tumbles and deploys its antenna. In about two weeks, it pops open its solar arrays and deploys the sails. The spacecraft’s onboard cameras are also timed to image the sail deployment sequence. So, while a radio is required to download photos and enter other flight modes, it’s not a prerequisite for sail deployment.

Stellar’s Chris Biddy advised the team to avoid any more sail deployments than necessary, since the CubeSat’s motor and gears experience wear and tear each time. In other words, the next sail deployment should be the last (except for the one that happens in space). This meant a Wednesday sail deployment would preclude any future day-in-the-life tests that involved additional sail deployments.

This made Bill Nye uneasy. He felt it was more worthwhile to wait and test the entire system end-to-end. In particular, he wanted to make sure the spacecraft ran through its so-called transition modes—the points in the mission timeline where operations shift from one phase to another (for instance, shifting between automated sail deployment to manual camera image download). A partial test would skip these transitions, which are often refuges for unseen problems.

The downside of waiting was schedule impact. It's been two years since the spacecraft's sails have been unfurled, so there’s a chance new problems are waiting to be discovered during the next sail deployment. An immediate sail test before the radio is fixed could give the team more time to fix potential snags.

In the end, it was agreed that end-to-end testing gives LightSail-A the best chance of a successful flight, despite the schedule risk. And if LightSail-A doesn't fly, it can continue to serve as a testbed in preparation for the 2016 LightSail-B mission.

Here's how the schedule currently looks:

To do before October 1: 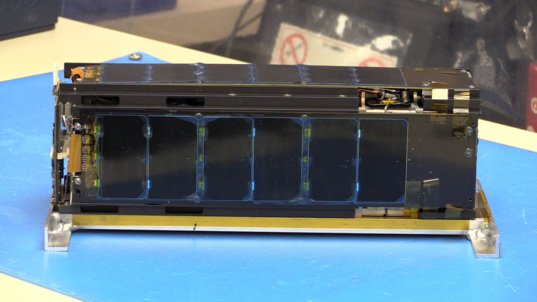 LightSail 1 in the clean room

The LightSail 1 spacecraft sits in a Cal Poly clean room prior to a scrubbed day-in-the-life test on Aug. 20, 2014.

Right now, the team is working with Tyvak to solve the radio problem. The next day-in-the-life test attempt is not scheduled, but as you can see from the above schedule, it needs to happen soon.

At this point, there are only theories as to what's causing the high power draw and low radio output. One possibility is an antenna configuration mismatch. LightSail’s antenna was built to comply with a specific set of radio design specifications. These specifications dictate the proper way the antenna should funnel power out of the spacecraft in the form of RF signals. Several variables affect the final configuration, including the length of the antenna and the length of the RF cable. Even the way the antenna is connected to the radio must be taken into account.

As LightSail was being built, the antenna system was tested to ensure its configuration matched the radio. But is it possible that the configuration is, in reality, mismatched? It could certainly explain the recurring radio problems and blown amplifiers. It could also mean an easy fix. But right now, this is only a theory.

In the meantime, I’ll be compiling all of the interviews and other footage we collected at Cal Poly. Even though we didn’t get to see a sail deployment, the trip was a worthwhile expedition and a rare opportunity to pull together the entire team. The project sails onward.