Casey Dreier with The Planetary Society made substantial contributions to this post.

In the children’s book The Little Prince, there is a delightful drawing of a boa constrictor that has a bulging stomach because it swallowed an elephant. In the coming year, I believe that the key development for NASA’s mission to Europa will be an agreement on how the agency plans to accommodate the monetary bulge that will come from funding this mission. The results of the negotiations between the agency’s managers, the President’s budget managers, and Congress likely will determine when this and other new missions will fly in the coming decade.

(I had hoped to include the drawing from the book, but it appears that the copyright is still in effect in the United States and France. You can see it at this webpage or a picture of a real constrictor after it swallowed a goat on this page.) 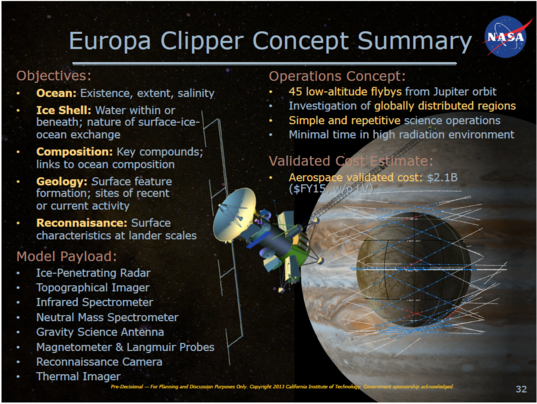 Summary of the planned Europa multi-flyby mission from a 2013 presentation. This chart is the only one I know of that provides a cost estimate from an independent review. The official budget for the mission has yet to be established and may differ from this estimate. Since this slide, the actual instrument payload has been selected and Congress has mandated that the mission also carry a Europa lander.

So why does the boa-elephant analogy work for understanding the funding for the Europa mission? Think of NASA’s planetary science budget as a hose—or snake if you prefer—that’s of relatively similar width from year to year (except for the attempted 20% cut 2013, but that’s another story). Generally, the overall amount of money available to fund all future and existing planetary missions is relatively consistent over the near future.

But when you’re building a spacecraft, your funding needs are not consistent year to year. Over the course of the development, costs grow substantially, peak, and then tail off. In the first years of developing a mission, spending is lower as much of the work is designing and validating technology needed for the spacecraft. Spending rapidly increases as parts are built, greater numbers of engineers and technicians are assigned the project, and pieces are assembled and tested. Most projects actually peak in funding needs a year or two before they launch, creating the equivalent of an elephant’s bulge in a boa constrictor. Spending typically drops before launch, finally reaching a low and steady pace that represents the costs of operating the mission in flight.

Because the overall amount of funding available for new missions is generally flat, NASA’s project managers carefully stagger the development of new missions in order to prevent different projects from peaking at the same time. 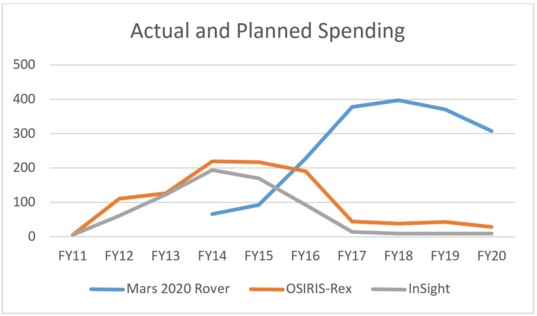 The actual and planned spending for planetary missions in development this decade, showing the characteristic bulge in spending in the years leading up to launch (2016 for the OSIRIS-REx asteroid sample missions, was to have been 2016 for the InSight Mars geophysical station, and 2020 for the Mars 2020 rover). As the development funding bulge for one mission ramps down, the bulge for the next mission can ramp up without creating the need for wide swings in the overall Planetary Science Division’s budget. Figures are from actual budgets through FY16 and are the projected funding from the FY16 budget proposal.

For the last several years, Congress and NASA have sparred over when the Europa mission should be staggered in respect to other missions. Supporters in Congress want to see the mission launch by 2022, and are willing to increase the overall funding available to Planetary Science to help incorporate the Europa bulge. NASA has only committed to sometime in the to the mid-to-late 2020s, and has shown little desire to increase overall funding to planetary science. To efficiently develop the Europa mission, the two will have to reach an agreement on a funding plan and launch date.

If a Europa mission is to launch by 2022, its funding peak will occur around the same time as the funding peak for the Mars 2020 rover, NASA’s other major planetary mission. NASA’s Mars 2020 rover and Europa missions are both Flagship missions with an expected cost of around $2 billion. Congress, however, has stated that the Europa mission must utilize the Space Launch System booster (cost unknown) and include a lander that could add upwards of $700M to the mission’s total cost. The net result is that Congress has mandated two large simultaneous bulges be funded at once for the 2020 rover and Europa mission.

Absent an increase in the budget for the Planetary Science Division in the late 2010s, these large missions could crowd out other, smaller missions. Both Congress and the White House have shown interest in ramping up the low-cost Discovery program over the next few years in an attempt to restore the cadence destroyed by cuts earlier in the decade. There is also the next New Frontiers mission, a medium-class planetary spacecraft that would launch by 2024. The funding bulges for these missions could overlap those of the Mars 2020 and Europa missions, creating more competition for funding.

To achieve everyone’s goals would require an increase of funding for NASA’s Planetary Science Division significantly above what the White House has proposed in recent years.

Jason Callahan and Casey Dreier of The Planetary Society have estimated what future NASA planetary budgets might look like if all the missions planned for development in the next few years are budgeted. The result is a substantial increase over the current planetary budget for Fiscal Year 2016 of $1.63B.

First, some background. Unlike Congress, which only appropriates money on an annual basis, budgets proposed by the President’s budget officers (in consultation with NASA’s managers) project out five years, with the first year the actual request for the next year’s funding from Congress and the subsequent years being notional, but indicative of the agency’s planning. For NASA to issue the multi-year contracts needed to develop a mission, there has to be a clear, long-term commitment from the agency that is reflected in the official budget request. It is very rare for a spacecraft to successfully come to fruition without appearing in the official President’s budget.

We will soon see if there is agreement for the Planetary Science budget to increase to accommodate this new mission. The President’s FY2017 budget request will be released in early February—we will see if it contains the larger proposed funding to include a Europa mission launch in the early 2020s.

But if the overall budget of planetary science doesn’t increase, there are several alternatives that the Administration could pursue:

Any of these alternatives represent solutions typical of those made in budget negotiations, which assume a flattish overall budget with the individual line items being traded off.

I’m hoping that this year represents a new possibility. The public has repeatedly shown its interest in planetary exploration through its avid following of missions in the press and the internet. Congress has noticed that interest and been willing to support increases in the NASA’s planetary program for several years. Several key members of Congress also are personally interested in planetary exploration specifically and space science in general and have consistently added money for Europa over the past few years. Congress has also consistently increased NASA’s budget since 2013, providing a surprising (and welcome) 7% increase in 2016.

This seems to be the year to attempt to create a political consensus for a new higher spending rate for NASA’s planetary program. The set of proposed missions is compelling. Congress is willing. For the next year, before the next President changes the players with the resulting delay in dealing with new policies, we have stable management teams in the President’s budget office and at NASA. And public interest groups like The Planetary Society have shown that they can demonstrate the public’s support for increased funding and build the political case for the needed funding.

These budget issues aren’t unique to the Europa mission. They occur with any large mission as NASA’s budgets are planned. In a zero-sum game, something has to give. In recent years, though, Congress has shown its willingness to increase the size of the budget to match the vision. Perhaps it will be possible to have a dream line of up missions in development: Mars 2020, Europa, two or more Discovery missions, and a New Frontiers mission. It’s worth working for.

I have seen just one official cost estimate for the Europa multi-flyby mission (previously called the Europa Clipper) in a mission definition update. That estimate was for $2.1B without the launch (and was made by the Aerospace Corporation, which NASA uses to provide independent mission cost estimates). To estimate total spending that must be done before a possible 2022 launch, we need to add in the possible costs of the newly required Europa lander and the launch vehicle. We should also subtract the costs of post launch operations (which seem to run $50M to $70M a year for Flagship missions) and money already spent or appropriated through FY16.

This back of the envelope calculation results in approximately $2.6B remaining spending before launch. If launch is in 2022, then that leaves six years after FY2016, for an average spending rate of $440M per year. More likely, there will be a higher peak spending rate for a couple of years with lower spending in the beginning and end of this period (based on spending patterns of other missions). A possible average, though, is as far as I can push this thought experiment.

*SLS cost estimate from another Europa mission presentation; lander costs from a press account and may not be firm; operations costs assume a five year prime mission at a swag of $60M per year.