Dawn is concluding a remarkable year of exploring dwarf planet Ceres. At the beginning of 2016, the spacecraft was still a newcomer to its lowest altitude orbit (the fourth since arriving at Ceres in March 2015), and the flight team was looking forward to about three months of exciting work there to uncover more of the alien world’s mysteries.

This animation shows many views of Occator Crater and its distinctive, captivating bright features. Dawn team members at the German Aerospace Center (DLR) combined photographs and other data collected by Dawn to make this video. (Unlike the visuals, the sounds are entirely speculative.) We have discussed the Occator findings shown here before. For details, see our last description, and follow the links from there to earlier Dawn Journals. Original video and caption. Video/image credit: NASA / JPL-Caltech / UCLA / MPS / DLR / IDA

As it turned out, Dawn spent more than eight months conducting an exceptionally rewarding campaign of photography and other investigations, providing a richly detailed, comprehensive look at the extraterrestrial landscapes and garnering an extraordinary bounty of data. In September, the craft took advantage of its advanced ion propulsion system to fly to a new orbit from which it performed still more unique observations in October. Last month, the ship took flight again, and now it is concluding 2016 in its sixth science orbit.

Dawn is in an elliptical orbit, sailing from about 4,670 miles (7,520 kilometers) up to up to almost 5,810 miles (9,350 kilometers) and back down. It takes nearly eight days to complete each orbital loop. Flying this high above Ceres allows Dawn to record cosmic rays to enhance the nuclear spectra it acquired at low altitude, improving the measurements of atomic constituents down to about a yard (meter) underground.

This animation shows Vesta (Dawn's first destination) and Ceres. Based on measurements of hydrogen, the colors encode the water content of the material within about a yard (meter) of the surface. We have seen before how the spacecraft’s neutron spectrometer can make such a measurement. Here, as before, scientists have good reason to assume the hydrogen is in water molecules. Some of the water is in the form of ice and some is bound up in hydrated minerals. Even if it not exactly soggy, Ceres is much, much wetter than Vesta. In some regions on Vesta, there is no evidence of water at all (represented by red), and even the greatest concentration (the deepest blue) is only 0.04 percent. On Ceres, water is abundant, varying from 1.8 to 3.2 percent, or 45 to 80 times more prevalent than the highest concentration on Vesta. (The interior of Ceres harbors even more water than that.) Note that on Ceres, there is very little difference at different longitudes. The variability is much stronger with latitude: at greater distances from the equator, water is more plentiful. This fits with the temperatures being lower near the poles, allowing ice to be closer to the surface for very, very long times without sublimating away. (Below, we will discuss the presence of ice on the ground.) Vesta and Ceres are shown to scale in this animation. They are the two largest objects in the main asteroid belt. Vesta’s equatorial diameter is 351 miles (565 kilometers). Ceres is 599 miles (963 kilometers) across at the equator. (Their rotation rates are not shown to scale. Vesta turns once in 5.3 hours, whereas Ceres takes 9.1 hours.) Video/image credit: NASA / JPL-Caltech / UCLA / MPS / DLR / IDA

The spacecraft has been collecting cosmic ray data continuously since reaching this orbit (known to the Dawn team, imaginative readers of last month’s Dawn Journal and now you as extended mission orbit 3, or XMO3). These measurements will continue until the end of the extended mission in June. But there is more in store for the indefatigable adventurer than monitoring space radiation.

Based on studies of Dawn’s extensive inspections of Ceres so far, scientists want to see certain sites at new angles and under different illumination conditions. Next month, Dawn will begin a new campaign of photography and visible spectroscopy. All of Dawn’s five previous science orbits had different orientations from the sun. And now XMO3 will provide another unique perspective on the dwarf planet's terrain. The figure below shows what the orientation will be when the explorer turns its gaze once again on Ceres for the first set of new observations on Jan. 27, 2017. 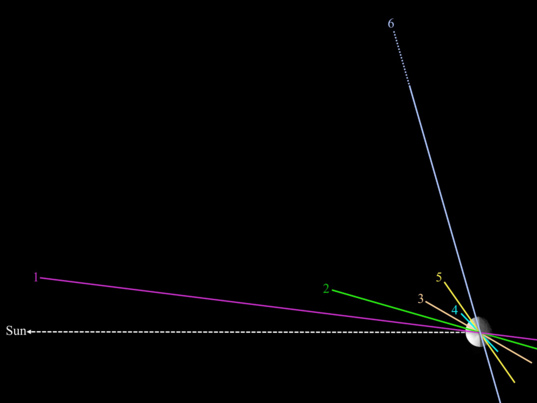 This illustrates (and simplifies) the relative size and alignment of Dawn’s six science orbits at Ceres. We are looking down on Ceres’ north pole. The spacecraft follows polar orbits, and seen edge-on here, each orbit looks like a line. (Orbits 1, 2 and 6 extend off the figure to the lower right, on the night side. Like 3, 4 and 5, they are centered on Ceres.) The orbits are numbered chronologically. The first five orbits were circular. Orbit 6, which is XMO3, is elliptical, and the dotted section represents the range from the minimum to the maximum altitude. With the sun far to the left, the left side of Ceres is in daylight. Each time the spacecraft travels over the illuminated hemisphere in the different orbital planes, the landscape beneath it is lit from a different angle. Ceres rotates counterclockwise from this perspective (just as Earth does when viewed from the north). So higher numbers correspond to orbits that pass over ground closer to sunrise, earlier in the Cerean day. (Compare this diagram with this figure, which shows only the relative sizes of the first four orbits, with each one viewed face-on rather than edge-on.) Click on this image for a larger view.

We mentioned in the figure caption that the alignments are simplified. One of the simplifications is that some of the orbits covered a range of angles. There is a well-understood and fully predictable natural tendency for the angle to increase. In some phases of the mission, the flight team allows that, and in others they do not, depending on what is needed for the best scientific return. At the lowest altitude (orbit 4 in the diagram, and sometimes known as LAMO, XMO1 or "the lowest orbit"), navigators held the orbit at a fixed orientation. Had they not done so, it would have changed quite dramatically over the course of the eight months Dawn was there. For XMO3, the team has decided not to keep the angle constant. Therefore, later observations will provide still different views. We will return to this topic in a few months.

We have described before how places that remain shadowed throughout the Cerean year can trap water molecules. Dawn’s pictures have revealed well over 600 craters high in the northern hemisphere that are permanently in darkness, covering more than 800 square miles (more than 2,000 square kilometers). (It has not been possible to make as thorough a census of the southern hemisphere, because it has been fall and winter there during most of Dawn’s studies, so some areas were not lit well enough. Now that spring has come, new photography will tell us more.)

This animation shows the lighting during a full Cerean day at high northern latitude. The 11-mile-diameter (18-kilometer-diameter) unnamed crater is at 82°N and 78°E, only 40 miles (65 kilometers) from the north pole. Because the sun is overhead near the equator, it never rises much above the horizon as seen from this location, so shadows are long, and deep sites never receive direct sunshine. More than half of this crater, about 53 square miles (137 square kilometers), is never illuminated. This is the largest permanently shadowed area identified on Ceres. Below, we can glimpse the interior of a nearby crater. Full image and caption.

Dawn peered into craters to see what was hidden on the dark floors. Long exposures could reveal hints of the scenery using the faint light reflected from crater walls. In 10 of the craters, scientists found bright deposits. In one of those craters, the reflective material extends beyond the permanent shadow and so is occasionally illuminated, albeit still with the sun very low on the horizon. And sure enough, right there, Dawn’s infrared mapping spectrometer found the characteristic fingerprint of ice. These shadowed crater floors accumulate water that happens to land there, preserving it in a deep freeze that may be colder than -260°F (-163°C). Readers are invited to formulate their own business plans for how best to utilize that precious resource.

These photographs show an unnamed crater not far from the one in the animation above. Located at 86°N and 80°E, this crater is 4.1 miles (6.6 kilometers) in diameter. On the left is a conventional view, in which most of the crater is cloaked in darkness. The enlarged picture on the right shows that same dark region, but now with some of the detail of the interior made visible using light reflected from the sunlit walls of the crater. It reveals a relatively bright (or, more to the point, a more reflective) region 1.1 miles (1.7 kilometers) across.

Jan. 1 is the anniversary of the discovery of Ceres. When Giuseppe Piazzi spotted the faint smudge of light in his telescope that night in 1801, he did not know that it would be known as a planet for almost two generations. (After all, he was an astronomer and mathematician, not a clairvoyant.) And he could never have imagined that more than two centuries later (by which time Ceres was known as a dwarf planet, reflecting progress in scientific knowledge), humankind would undertake an ambitious expedition to explore it, dispatching a sophisticated ship to take up residence at that distant and mysterious place. What Piazzi discovered was a lovely jewel set against the deep blackness of space and surrounded by myriad other gleaming stellar jewels. What Dawn has discovered is a unique and fascinating world of complex geology, composed of rock and ice and salt, with exotic and beautiful scenery. And as Dawn continues to build upon Piazzi’s legacy, unveiling Ceres’ secrets, everyone who has ever looked in wonder at the night sky, everyone who has ever hungered for new understanding, everyone who has ever felt the lure of a thrilling adventure far from home and everyone who has ever yearned to know the cosmos will share in the rewards.