The indefatigable Dawn spacecraft is continuing its extraordinary interplanetary flight on behalf of inquisitive creatures on distant Earth. Progressing ever farther from Vesta, the rocky and rugged world it so recently explored, the ship is making good progress toward its second port of call, dwarf planet Ceres.

We have seen in many logs that this adventure would be quite impossible without its advanced ion propulsion system. Even a mission only to orbit Vesta, which Dawn has accomplished with such stunning success, would have been unaffordable in NASA's Discovery Program without ion propulsion. This is the only probe ever to orbit an object in the main asteroid belt between Mars and Jupiter. But now, thanks to this sophisticated technology, it is going beyond even that accomplishment to do something no other spacecraft has attempted. Dawn is the only mission ever targeted to orbit two extraterrestrial destinations, making it truly an interplanetary spaceship. 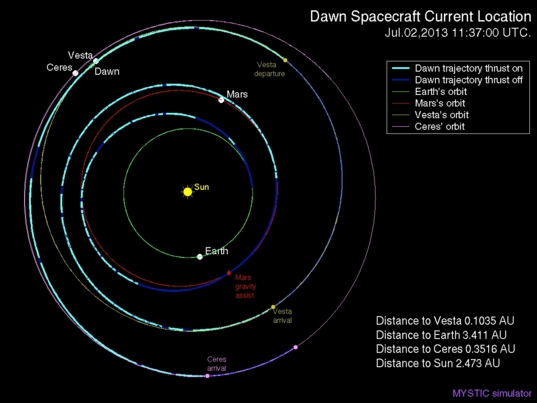 Ion propulsion is 10 times more efficient than conventional chemical propulsion, so it enables much more ambitious missions. It uses its xenon propellant so parsimoniously, however, that the thrust is also exceptionally gentle. Indeed, the ion engine exerts about as much force on the spacecraft as you would feel if you held a single sheet of paper in your hand. At today's thrust level, it would take more than five days to accelerate from zero to 60 mph. While that won't rattle your bones, in the frictionless, zero-gravity conditions of spaceflight, the effect of the thrust gradually accumulates. Instead of thrusting for five days, Dawn thrusts for years. Ion propulsion delivers acceleration with patience, and patience is among this explorer's many virtues.

To accomplish its mission, Dawn is outfitted with three ion engines. In the irreverent spirit with which this project has always been conducted, the units are fancifully known as #1, #2, and #3. (The locations of the thrusters were disclosed in a log shortly after launch, once the spacecraft was too far from Earth for the information to be exploited for tawdry sensationalism.) For comparison, the Star Wars TIE fighters were Twin Ion Engine ships, so now science fact does one better than science fiction. On the other hand, the TIE fighters employed a design that did seem to provide greater agility, perhaps at the expense of fuel efficiency. Your correspondent would concur that when you are trying to destroy your enemy while dodging blasts from his laser cannons, economy of propellant consumption probably isn't the most important consideration.

At any rate, Dawn only uses one ion engine at a time. Since August 31, 2011, it has accomplished all of its thrusting with thruster #3. That thruster propelled Dawn along its complex spiral path down from an altitude of 2,700 kilometers (1,700 miles) to 210 kilometers (130 miles) above Vesta's dramatic landscape and then back up again. Eventually, the engine pushed Dawn out of orbit, and it has continued to work to reshape the spacecraft's heliocentric course so that it ultimately will match Ceres's orbit around the sun.

Although any of the thrusters can accomplish the needed propulsion, and all three are still healthy, engineers consider many factors in deciding which to use at different times in the mission. Now they have decided to put #2 back to work. So on June 24, after its regular monthly hiatus in thrusting to point the main antenna to Earth for a communications session, the robotic explorer turned to aim that thruster, rather than thruster #3, in the direction needed to continue the journey to Ceres. Despite not being operated in nearly two years, #2 came to life as smoothly as ever. It is now emitting a blue-green beam of xenon ions as the craft has its sights set on the mysterious alien world ahead.

Some readers (surely including our hungry friends the Numerivores) may be interested in the numbers that illustrate the amazing performance of the ion propulsion system, so we will include a few morsels here. Spacecraft using conventional propulsion coast the great majority of the time, using their main engines for minutes or a small number of hours over the entire course of their missions. (Note that most natural objects coast as well, including the moon orbiting Earth, Earth and other planets and asteroids orbiting the sun, and the sun and other stars orbiting within the Milky Way Galaxy.) Dawn has spent 63 percent, almost two-thirds, of its time in space in powered flight, or more than 3.6 years. (This is well in excess of any other spacecraft's total thrust time.) Engine #3 has accomplished slightly more than half of that, or 1.8 years. Engine #1 completed more than 10 months of thrusting, and engine #2 is now at 11 months and steadily increasing. (A partial summary of the history of thruster use is here.)

In all that time maneuvering through the solar system, Dawn has expended only 305 kilograms (672 pounds) of xenon. That's equivalent to less than 2.7 milligrams per second. So averaged over its deep space travels so far, the ship has consumed only half a pound of xenon per day of thrusting. What extraordinary efficiency!

That thrust has been enough to change Dawn's speed by about 8.3 kilometers per second (18,500 mph). That is nearly double the previous record for propulsive velocity change set by Deep Space 1, the first interplanetary mission to use ion propulsion.

Although it has already maneuvered far more than any other spacecraft, it still has much more ahead to reach and explore Ceres. Indeed, remarkable though the ion propulsion is, being so efficient, gentle, and persistent, it is a tool. Its importance is in what it allows the spacecraft to accomplish. Ion propulsion is taking Dawn to giants of the main asteroid belt. Vesta and Ceres have been espied from Earth since the beginning of the 19th century (and were considered planets until scientific knowledge advanced enough to change their designation). After more than 200 years, we finally have the capability to turn those smudges of light among the stars into complex, richly detailed worlds. Revealing not only fascinating secrets about the dawn of the solar system, the explorer also unveils vistas that excite everyone who is curious about the nature of the universe. Far more powerful than ion propulsion is the drive within us to undertake grand adventures, to push our boundaries, to overcome our limitations, and to challenge our imagination and our ingenuity in pursuit of noble rewards. Perched atop its blue-green pillar of xenon ions, Dawn is a dynamic symbol of humankind's insatiable drive to know the cosmos.

So actually thrusting with ion engines--one can reach a good percentage towards light speed over decades then. It's not just theory anymore. We could conceivably --with enough time and money and larger ion engines NOW, build a starship---right?

To reach really high speeds with ion propulsion, you need much more energy than solar arrays or even RTGs can provide. You need a nuclear reactor which can supply the energy needed to heat the ions up to really high velocity. But that shouldn't be all that unhinkable. Just think of launching a nuclear submarine into space and having ion engines instead of propellers! And a nuclear spaceship can be a lot lighter than a nuclear sub since it doesn't need to withstand hundreds of atmospheres of water pressure. Just one atmosphere does well for human life! Man-rated rockets that would launch the spaceship are quite safe now. And even if one fell into the ocean, we have had several nuclear subs that imploded in the oceans with no widespread consequences. So we have the capability. All that is needed is the will.

Unfortunately it is not so simple to achieve near light-speed. Let's consider a numerical example. Suppose you want to accelerate the space shuttle to 1/2 the speed of light. It has a mass of about 2000 tons. The kinetic energy needed is around 2.3*10^22 joules, whatever the energy source. This converts to about 6.3*10^15 kWhr. At $0.10 per kWhr, this is $625 trillion, or 42 years' worth of U.S. GDP. This ignores the substantial cost of accelerating the needed fuel, so the real answer is far worse. Unless virtually free energy is discovered, we're not going to the stars any time soon. Sorry to sound negative, but this is the physics.

I was wondering if the post-Ceres flyby of 2 Pallas was still in the offing. I read that it was possible.....

Mike M. -- in theory yes but David S. has details that do factor in. Drat. Anyway here is the next generation ion engine, the acronym is NEXT, a coincidence; Nasa's Evolutionary Xenon Thruster. Go to http://www.nasa.gov/centers/glenn/technology/propulsion_space.html#.Udbu_TvVDI8

Dr. Rayman, if you have not seen this link yet I know you'll like it as much as your colleagues would. Dawn's performance has been "undawnting" to such a high level that NASA engineers have made great advances in ion propulsion since Dawn launched. : )

Impressive as the velocities are with ion propulsion, the technology (even including advancements such as NEXT) is far, far, far away from what would be needed to achieve an appreciable fraction of the speed of light. This problem is exceedingly difficult, even when viewed in the simple terms of classical (i.e., nonrelativistic) physics. Any concepts for reaching relativistic velocities may be fun ideas, but they are little more than that. In response to Messy's question, while I occasionally see such suggestions that Dawn might fly by Pallas, that has never been a serious possibility. It may have been a desire by some people, but no meaningful mission analysis ever supported it. Indeed, we have never performed any realistic investigations of targets we might encounter after Ceres, in part simply because the problem is too sensitive to when the Ceres departure might be. There is so much wonderful science to do at Ceres, that the most attractive extended mission target has always been Ceres itself. While subsequent targets would have been possible, we have not spent your tax dollars (or mine) in unproductive studies of them.