On the fifth anniversary of the beginning of its ambitious interplanetary adventure, Dawn can look back with great satisfaction on its spectacular exploration of the giant protoplanet Vesta and forward with great eagerness to reaching dwarf planet Ceres. Today Earth's robotic ambassador to the main asteroid belt is in quiet cruise, gradually reshaping its orbit around the sun so it can keep its appointment in 2015 with the mysterious alien world that lies ahead.

This anniversary resembles the first three more than the fourth. Its first years in space were devoted to spiraling away from the sun, ascending the solar system hill so it could gracefully slip into orbit around Vesta in time for its fourth anniversary. One year ago, Dawn was in the behemoth's gravitational grip and preparing to map its surface in stereo and make other measurements. The subsequent year yielded stunning treasures as Dawn unveiled the wondrous secrets of a world that had only been glimpsed from afar for over two centuries. While at Vesta, it spiraled around the massive orb to position itself for the best possible perspectives. Its final spiral culminated in its departure from Vesta earlier this month. Now for its fifth anniversary, it is spiraling around the sun again, climbing beyond Vesta so that it can reach Ceres.

For those who would like to track the probe’s progress in the same terms used on previous (and, we boldly predict, subsequent) anniversaries, we present here the fifth annual summary, reusing the text from last year with updates where appropriate. Readers who wish to cogitate about the extraordinary nature of this deep-space expedition may find it helpful to compare this material with the logs from its first, second, third, and fourth anniversaries.

In its five years of interplanetary travels, the spacecraft has thrust for a total of 1,060 days, or 58 percent of the time (and about 0.000000021 percent of the time since the Big Bang). While for most spacecraft, firing a thruster to change course is a special event, it is Dawn’s wont. All this thrusting has cost the craft only 267 kilograms (587 pounds) of its supply of xenon propellant, which was 425 kilograms (937 pounds) on September 27, 2007.

The fraction of time the ship has spent in powered flight is lower than last year (when it was 68 percent), because Dawn devoted relatively little of the past year to thrusting. Although it did change orbits extensively at Vesta, most of the time it was focused on exactly what it was designed and built to do: scrutinize the ancient world for clues about the dawn of the solar system.

The thrusting so far in the mission has achieved the equivalent of accelerating the probe by 7.14 kilometers per second (16,000miles per hour). As previous logs have described (see here for one of the more extensive discussions), because of the principles of motion for orbital flight, whether around the sun or any other gravitating body, Dawn is not actually traveling this much faster than when it launched. But the effective change in speed remains a useful measure of the effect of any spacecraft’s propulsive work. Having accomplished slightly more than half of the thrust time planned for its entire mission, Dawn has already far exceeded the velocity change achieved by any other spacecraft under its own power. (For a comparison with probes that enter orbit around Mars, refer to this earlier log.)

Another way to investigate the progress of the mission is to chart how Dawn’s orbit around the sun has changed. This discussion will culminate with a few more numbers than we usually include, and readers who prefer not to indulge may skip this material, leaving that much more for the grateful Numerivores. In order to make the table below comprehensible (and to fulfill our commitment of environmental responsibility), we recycle some more text here on the nature of orbits.

Orbits are ellipses (like flattened circles, or ovals in which the ends are of equal size). So as members of the solar system family follow their paths around the sun, they sometimes move closer and sometimes move farther from it.

In addition to orbits being characterized by shape, or equivalently by the amount of flattening (that is, the deviation from being a perfect circle), and by size, they may be described in part by how they are oriented in space. Using the bias of terrestrial astronomers, the plane of Earth’s orbit around the sun (known as the ecliptic) is a good reference. Other planets and interplanetary spacecraft may travel in orbits that are tipped at some angle to that. The angle between the ecliptic and the plane of another body’s orbit around the sun is the inclination of that orbit. Vesta and Ceres do not orbit the sun in the same plane that Earth does, and Dawn must match its orbit to that of its targets. (The major planets orbit closer to the ecliptic, and part of the arduousness of the journey is changing the inclination of its orbit, an energetically expensive task.)

Now we can see how Dawn has been doing by considering the size and shape (together expressed by the minimum and maximum distances from the sun) and inclination of its orbit on each of its anniversaries. (Experts readily recognize that there is more to describing an orbit than these parameters. Our policy remains that we link to the experts’ websites when their readership extends to one more elliptical galaxy than ours does.)

The table below shows what the orbit would have been if the spacecraft had terminated thrusting on its anniversaries; the orbits of its destinations, Vesta and Ceres, are included for comparison. Of course, when Dawn was on the launch pad on September 27, 2007, its orbit around the sun was exactly Earth’s orbit. After launch, it was in its own solar orbit.

For readers who are not overwhelmed by the number of numbers, the table may help to demonstrate how Dawn has patiently transformed its orbit during the course of its mission. Note that last year, the spacecraft’s path around the sun was exactly the same as Vesta’s. Achieving that perfect match was, of course, the objective of the long flight that started in the same solar orbit as Earth, and that is how Dawn managed to get into orbit around Vesta. While simply flying by Vesta would have been far easier, matching orbits with it required the extraordinary capability of the ion propulsion system. Without it, NASA’s Discovery Program would not have been able to afford a mission to explore this fascinating world, and a mission to both Vesta and Ceres would have been impossible.

Although the probe left Vesta only three weeks ago, the effect of the ion thrusting is already evident. Dawn is no longer in the same orbit as Vesta. It is propelling itself along a different path, forging its own course through the asteroid belt. The journey will be long, and the exploration of Ceres will not commence until well after Dawn's seventh anniversary of venturing into space. Many exciting discoveries and many daunting challenges lie ahead, and some of them have yet even to be recognized. But this stalwart ship (supported by its crew on distant Earth) has proven itself capable of accomplishing remarkable feats in its quest to expand frontiers and reap the great rewards of new knowledge and exciting new perspectives on the solar system for the bold creatures whose passions and insightful creativity fuel its extraordinary cosmic adventure. 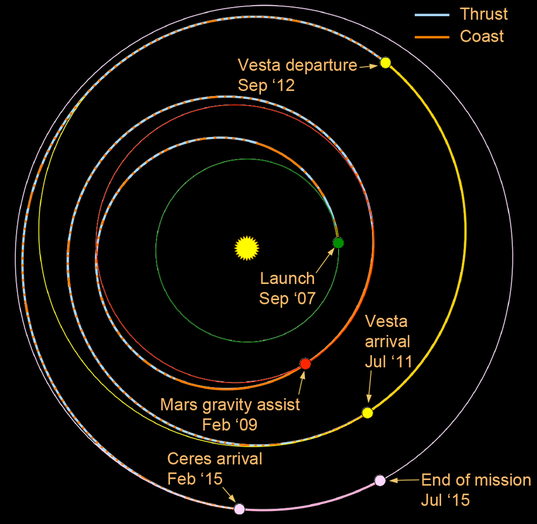 Dawn's trajectory as of September 2012

Hmmm - some inaccuracies, I think, in your statements about Dawn " Orbiting farther from the sun, and thus moving at a more leisurely pace, ...", slowing down to Vesta's speed, and the "even more sedate Ceres". It's a very long time since I took courses in this stuff, but I think that while the orbital period decreases with distance from the sun, an object's speed must increase in order to move to a more distant orbit.

Hi Larry The story is correct. Gravity is counter-intuitive as you have to think about it in terms of the spacecraft's kinetic energy but in summary : The speed for a circular orbit is proportional to 1 divided by the square root of the size of the orbit irrespective of how the spacecraft got there. Theoretically it could follow the same path at a higher speed but it would have to continuously fire its engine at an angle to its path to push itself partially towards the Sun to cancel out its natural tendency to swing out away from the Sun .. which is a big waste of fuel so it's not normally done. The propulsion system of a spacecraft moving away from the Sun may indeed 'push' it faster but it is also simultaneously being slowed by the Sun's gravity in the process of moving out further from it (the same as a ball thrown up at an angle slows as it rises). If the 'push' is over an extended period (lots of tiny pushes) and it stays close to a circular orbit then the overall effect is for it to slow down continuously in spite of being pushed forward.