The Winter 2017/2018 issue of The Planetary Report is arriving in Planetary Society members’ mailboxes. But members who like to read their magazine on the screen can pick it up here.

In this issue, Emily Lakdawalla serves up her traditional spread of special space exploration treats. In “The Year in Pictures,” Emily showcases a few of the visual rewards from our explorations of 2017. 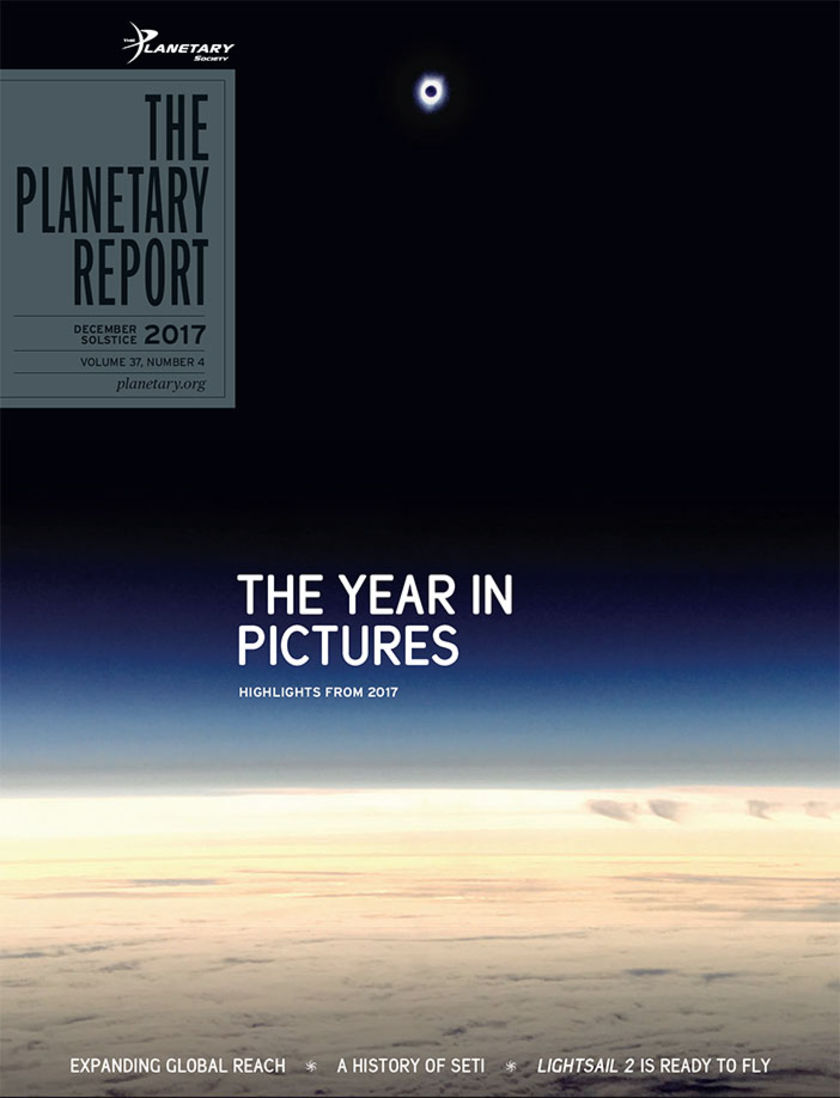 Since its earliest days, The Planetary Society has supported a variety of SETI (Search for Extraterrestrial Intelligence) projects. Last fall, Jason Davis delved deeply into the history of the field and produced a comprehensive, three-part web feature called, “Is There Anybody Out There?” In these pages we offer a short excerpt, but make sure to enjoy the full story on our site.

Total solar eclipses are not rare events on Earth, but this past August’s eclipse was the first total solar eclipse to cross the continental United States from its Pacific to its Atlantic shores since 1918. First time eclipse-viewer Whitney Pratz hopped onto one of Betchart Expeditions’ extraordinary tours and wrote a diary of her adventure for us. Check out “There Goes the Sun.”

The Planetary Society has taken another major step in our march toward the launch pad with LightSail 2. The spacecraft is now fully tested and ready to be integrated into a P-POD (Poly Picosatellite Orbital Deployer), which will use a spring mechanism to deploy the spacecraft once it is in orbit. In “Closeout!” Bruce Betts reviews the last year in LightSail 2’s development, and he looks ahead to the future.

Casey Dreier breaks down the changes—and lack thereof—in portions of 2017’s space exploration policy in “The More Things Seemed to Change … ” (Hint: some expected budget cuts did not happen, and NASA announced a bold new plan for Mars exploration.)

Plus: Our European volunteers are full of excitement, and Bill Nye is celebrating our expanding reach and global engagement.

The Planetary Society is always advancing space science and exploration in new and exciting ways. We always have—and always will—provide ways for the public to be a part of the adventure. If you are not yet a member and you want to get in on the fun, join us.