Three of NASA's International Space Station partners have begun joint preliminary work on a robotic lander for a mission to return soil samples from the far side of the Moon, while simultaneously testing several key technologies for future human expeditions.

After several years of conceptual studies, engineers from the European, Japanese and Canadian space agencies (ESA, JAXA and CSA) recently joined forces to propose the Heracles project, previously known as the Human Lunar Exploration Precursor Program, or HLEPP. The four-component spacecraft includes a soil-sampling rover to be deployed from a lander, with the lander to be topped with an ascent stage designed to blast a capsule full of samples back into lunar orbit.

The project was conceived as an integral part of the Lunar Orbital Platform-Gateway (LOP-G), a small, Moon-orbiting space station scheduled to come online in the 2020s. The LOP-G will be the final destination for the Heracles ascent stage. There, the samples will be transferred to a visiting Orion spacecraft for return to Earth.

"ESA, JAXA and CSA never landed a human on the Moon, so we would like to first land a sub-scale lander and a sub-scale rover before we put humans on them," said Markus Landgraf, who leads the Heracles project at the European Space Agency's Directorate of Human Spaceflight and Robotic Exploration Programs, "All these elements have common parts (with future human-capable vehicles), such as guidance system, identical engines, and so on."

The multi-faceted Heracles mission is still in the drawing-board stage, known in the industry as Phase A, and will have to be okayed for full-scale development by a council of European ministers in December 2019. Similar approvals will be required from the Japanese and Canadian governments. 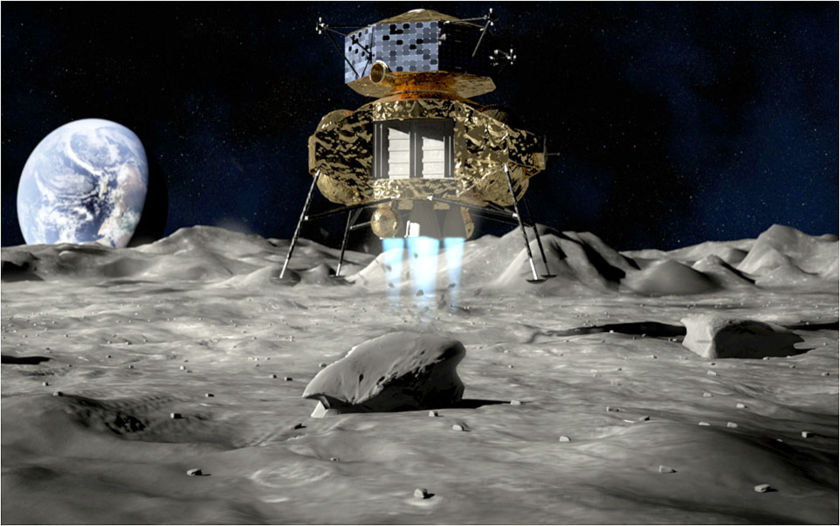 In terms of costs, Heracles is expected to be on par with ESA's Rosetta mission, which explored a comet and dropped a small probe on its surface. Under the current assumptions, Europe will bear 50 percent of the project's cost, with Canada and Japan splitting the other half.

Heracles would notionally launch on an Ariane 6 rocket in 2026, and coincide with an upcoming Orion mission carrying a crew of four to the LOP-G. In the following 10 to 20 days after launch, the robotic lander will first enter lunar orbit and then descend to the Moon's surface.

For the Heracles landing site, mission planners are eyeing Schrodinger crater, known as the second-youngest and one of the best-preserved impact basins on the Moon. It is considered to be a geological gold mine, and a potential site for extracting and using resources such as water ice. After its touchdown at Schrodinger, the rover will embark on a 30-kilometer, 70-day round trip, collecting up to 15 kilograms of samples and delivering them back to the ascent stage.

Using a yet-to-be-clarified method, the 23-kilogram capsule with samples will be lifted from the rover and hoisted into the ascent stage.

"Our first approach was that we could actually drive the rover back up on the ramp (of the lander to unload samples), but it is currently not favored," Landgraf said. "So, there is another way of doing it. The rover itself has a short arm, so we will use that arm to take the sample container and attach it to the end of the long cable, which will be winched up to the ascent stage, where it will lock itself through a mechanism. The concept is not dissimilar to the (Soviet) Luna-24 mission, which had a rail delivering the drilled core to the ascent stage."

Engineers are also still contemplating the exact design of passive thermal shielding which will keep the samples as close to their original chemical state as possible. The goal is to preserve so-called volatiles, including potential water ice.

Thanks to the return of the soil samples via the Orion spacecraft, the developers of the Heracles project don't have to worry about a fiery reentry into the Earth's atmosphere and landing under a parachute, which is what the Soviet lunar sample return missions had to go through in the 1970s.

"Our sample container will never go above the room temperature," Landgraf said.

After the departure of the ascent stage with the samples, the rover will drive off from the Heracles' landing site to embark on an endurance run toward Amundsen Crater near the lunar South Pole. Heracles mission planners are hoping for a year-long trek covering 300 to 500 kilometers, which will also scout future sites for human expeditions.

The ambitious project faces several major technical challenges. One is the development of a reliable power supply and thermal control system capable of keeping sensitive systems onboard the rover alive during ultra-cold and long lunar nights. "We are currently thinking about a radioisotope (generator, which could keep systems warm) and we have a technology development proposal to do that in Europe, but we haven't baselined it, said Landgraf. "There are other options such as "cold electronics," that can survive rather low temperatures."

Also, engineers would have to choose between fully autonomous and remote control systems for the rover. "We will use ground controllers in a very similar fashion to the Lunokhod mission," Landgraf said, referring to the legendary Soviet rovers of the 1970s, which were directly controlled by a team of pilots on the ground. "That is because we think that it is better to have human operators for the long traverse, rather than relying on the autonomous systems."

However, since the mission would take place on the far side of the Moon, some kind of relay station would be required. Mission planners may use the LOP-G itself for this job, or augment that with commercial satellites.

Along with the "pilots" on the ground, the LOP-G crew will likely have a chance to practice driving the rover from its own console aboard the outpost. "We think 80 percent of the time, or even more, the rover will be driven by the ground control, but when the crew is there (at the Gateway) during a 14 or 17-day mission, it will do that as well," Landgraf said.

With the mission scenario roughly hammered out, the partners are currently trying to split responsibilities along their lines of expertise and budgetary capabilities. For example, Japan is gearing up to contribute a landing engine for the spacecraft, burning cryogenic liquid oxygen and liquid methane. The same 30-kilonewton engine could later be clustered to form a three- or four-engine propulsion system for a human lander. At the same time, Canada hopes to build a 500-kilogram-class rover and other robotic systems, which can also be used for future human expeditions.

According to Landgraf, the three partners hope to accept their respective roles by the beginning of next year.  "The project is still open for contributions by other international partners," he said. So far, NASA and Roskosmos are participating as observers in various multilateral discussions of the project.

"On the U.S. side, there is a lot of changes in the approach which they want to take to go to the Moon," Landgraf said. "But I am quite convinced that within the next couple of months, we will see that everything will converge to a good solution, where all the partners have a good role."

This sounds pretty complex. Therefore expensive. Probably half the cost of Mars sample return. But whereas the very first cache of Mars samples returned will probably reveal whether there's current life there, which, if there is, will be earth-shattering and history-making, the lunar samples promise no such truly epoch-making news. So why don't ESA, JAXA and CSA spend this money on a similar Mars project, even partnering with the US/China/Russia/India as required? NASA is obviously on course to eventually do something anyway, so no blame there, but, for the others, Mars-life is a hugely more exciting, newsworthy, and public-inspiring goal. It's relatively crazy that by far the biggest question of all is now well within our technological capacity to answer (not necessarily on Mars, but feasibly so), and yet there is still little plan or impetus to actually do it, while vast sums get spent on similarly technologically difficult projects.

Firstly, thanks to Anatoly Zak, also author of the "Russian Space Web". Since the following question will likely spark various responses (which lend themselves to a tree structure as opposed to a linear one), I posed it on the *Planetary* subreddit: https://www.reddit.com/r/planetarysociety/comments/88sza9/iss_partners_consider_lunar_sample_return_mission/ Whether you're US, European, Japanese or other, it would be interesting to hear your reactions to this project * To what extent do you think this project favorises healthy competition and low-cost autonomous access to the Moon on a short time horizon whilst avoiding *single points of failure* (SPOF) both on a project level and an operational level ? * How do you think this relates to the current development of so-called "new space" (not just one company ;) which tries to limit dependency on institutions, favorizing flexible and direct access to any destination. * Do you think this project integrates lessons learned from good/bad experiences including the Shuttle and the International Space Station ? BTW. If there's a better place than Reddit for asking this, I'm open to all suggestions. Whatever the alternative, the objective is to avoid clutter in the comments section here.