The popularity of planetary science and astronomy has a lot to do with fascinating, bizarre, stark, and beautiful photos of worlds unknown. Pictures of space capture attention and reel people in. But interpreting those images to study planetary processes such as impact cratering rates, dune structures, rock strata, etc. is only a very small portion of the work of everyday planetary scientists and astronomers. Terabytes of data from every space mission are of the non-image kind.

Planetary scientists interpret those non-photographic data and try to make sense of it. Once a scientist understands the secrets of the data, their job is to make it understandable for non-specialists and non-scientists, and it would be almost impossible to find a science journal article that does not use graphs to help tell the story of the data. Graphs, like a picture, are worth a thousand words.

Petrology is a field of science in which scientists study the compositions of rocks and minerals and interpret their geologic history. A common graph petrologists use is the “pyroxene quadrilateral”, used to plot the compositions of common rock-forming minerals called pyroxenes. These graphs, like photos of space, can reveal an understanding of the remotest parts of the solar system.

Minerals of all types are made by a repeating pattern of molecules. For a simple one like table salt, the sodium chloride molecule (NaCl) is repeated over and over. Within the silicate class of minerals there is a more complex mineral group called pyroxene. Pyroxene compositions are generally written as XY(Si,Al)2O6, where X and Y are positively charged ions (cations), usually calcium, magnesium, or iron (Ca, Mg, or Fe). The overall structure of this mineral is constant -- the atoms are arranged in the same repeating pattern regardless of which cations are present -- but the cations can substitute for each other, making pyroxene minerals of various compositions. 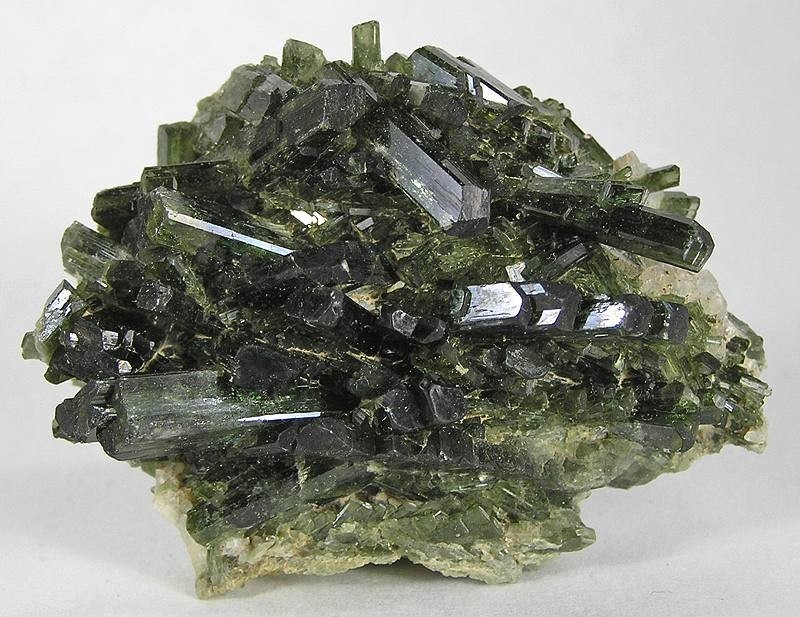 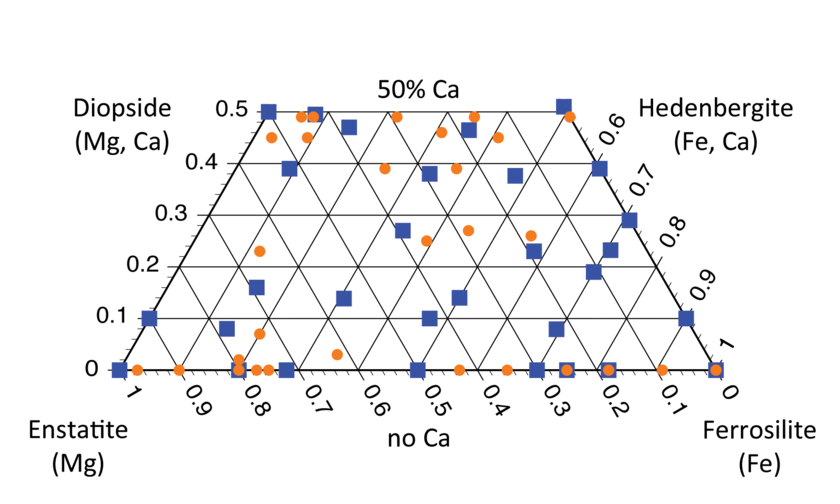 This pyroxene quadrilateral is showing example compositions, where enstatite is pure magnesium pyroxene (Mg2Si2O6) and ferrosilite is pure iron pyroxene (Fe2Si2O6). Diopside is a pyroxene with 50% calcium and 50% magnesium in the structure (CaMgSi2O6); hedenbergite is a pyroxene with 50% calcium and 50% iron in the structure (CaFeSi2O6). I am working on this graphic for Lane et al. (2018), a paper in which the blue squares represent pyroxene mineral samples that will be discussed in the paper, and orange dots represent pyroxene compositions studied but will not be discussed specifically in the paper.

Picture the pyroxene quadrilateral above as if the sides were extended into a triangle. Each point of the triangle represents one element – calcium at the top, magnesium at the bottom left, and iron at the bottom right. 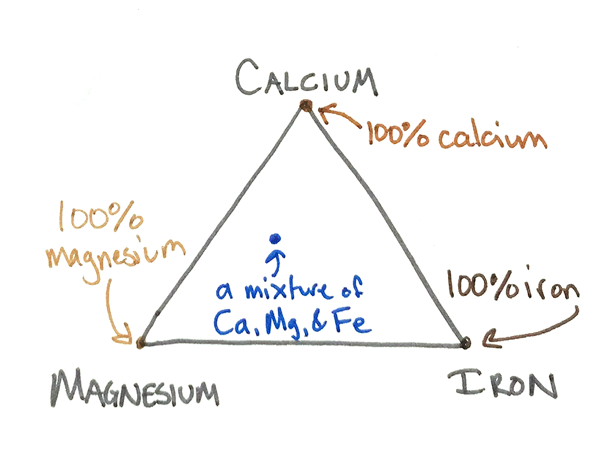 But you may have noticed that my diagram isn't a triangle. It's truncated -- the top of the triangle is missing, leaving my diagram as a trapezoidal shape. That happens because calcium ions are so large (by comparison to magnesium and iron cations), putting them into a pyroxene causes the mineral to deform away from a true pyroxene structure. At most, ONLY HALF of the cations in a pyroxene can be calcium, or its crystal pattern no longer looks like a pyroxene. The “pyroxene quadrilateral” bounds the possible pyroxene compositions to no more than 50% calcium, plus 50% or more magnesium and/or iron. 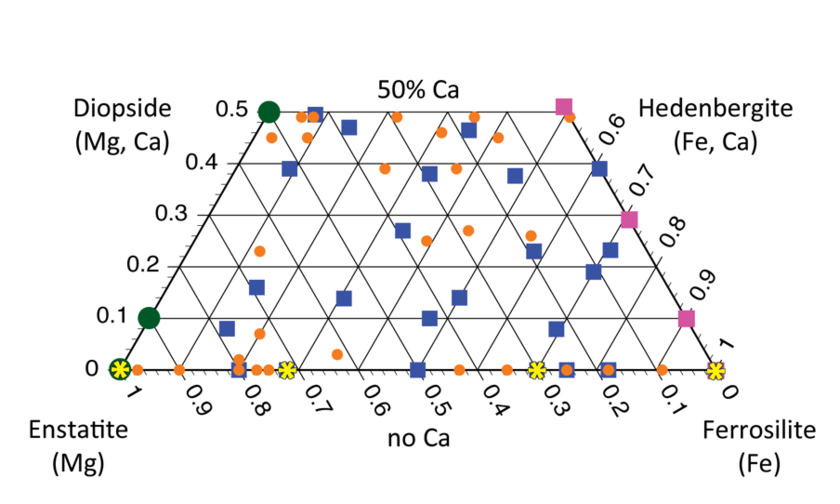 Why do we care which cations are present in a pyroxene crystal? Pyroxenes of different compositions crystallize under specific chemical and environmental conditions. The compositions of pyroxene crystals in a rock act as historical temperature records. Geologists use them to interpret the evolution of the magma, from liquid to cooled rock. Helpfully, pyroxene minerals are some of the most abundant minerals in the solar system. They are plentiful in meteorites and other igneous rocks. Their name is derived from the Greek pyro (“fire”) and xenos (“stranger”) because these minerals, which form early as a lava cools from liquid to solid, can often be the only visible crystals in an otherwise fine-grained rock. (e.g., Wells, 1977; Taylor, 1998; Lindsley, 1983; Abell et al., 2007; Klima et al., 2008).

These parameters (as one example) can tell a scientist a lot about rocks that form on other solar system bodies and meteorites, too, and can sometimes tell which parent body a meteorite came from! In my work, we've performed laboratory spectroscopy studies of pyroxenes of a wide variety of known compositions (marked by orange dots and blue squares on the quadrilateral). The paper we are writing will provide the spectroscopy community with a reference for translating spectra taken by orbiting or roving spacecraft into pyroxene compositions. That will help scientists who use spectroscopy to tell the geologic history of a space rock without ever touching it.

I hope you now understand the pyroxene quadrilateral and what it tells one about mineral composition, which in turn, tells scientists about the geology on the Solar System body being studied. You earned an A+ for reaching the end of this blog and you also gained a new understanding about day-to-day planetary science conducted without photographic images of those far-away worlds.

Further reading about pyroxene as a geothermometer:

Taylor, W. R. (1998) An experimental test of some geothermometer and geobarometer formulations for upper mantle peridotites with application to the thermobarometry of fertile lherzolite and garnet websterite. Neues Jahrbuch für Mineral.-Abhandlungen Band 172:381-408. 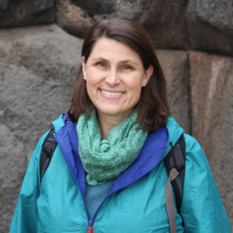