Unraveling a Martian enigma: The hidden rivers of Arabia Terra

Since the days of Mariner, most Mars watchers have heard of the famous valley networks. These are large, elongated troughs dissecting much of the surface, which resemble river-cut valleys on Earth. Also familiar to many are the more recently discovered fan-shaped structures often found at the outlets of valley networks—good examples of these are the Eberswalde and Jezero deltas, both thought to have formed in deep lakes, billions of years ago. What is perhaps less well-explored are the bits in between the valleys and the deltas—that is, the flood plains. This is what my colleagues and I published a paper on last year: Arabia Terra, possibly Mars’ largest flood plain.

Rivers on Earth typically drain from upland areas, cutting into mountains and hills. However, before they reach their final destinations, such as a lake or sea, they usually pass through low-lying areas, forming floodplains, like in the lower reaches of the Ganges or the Mississippi.

Several areas of Mars have previously been found to contain the fossilised remains of these deposits, such as Aeolis Dorsa, several hundred kilometres to the east of Gale Crater. Arabia Terra, it turns out, contains similar deposits to Aeolis, although the region is much larger in size.

Arabia Terra has always been a bit of a martian enigma. Firstly, it’s clearly very old, as it is covered in large, ancient impact craters, and mostly dates from about 3.9-3.7 billion years ago (the Noachian period), when most people think Mars was at its wettest. It’s also the most northerly part of Mars’ southern highlands, extending to the hemispheric dichotomy, which marks the boundary with the lowlands and the northern plains. However, what’s unusual about Arabia is that it appears to have very few valley networks. 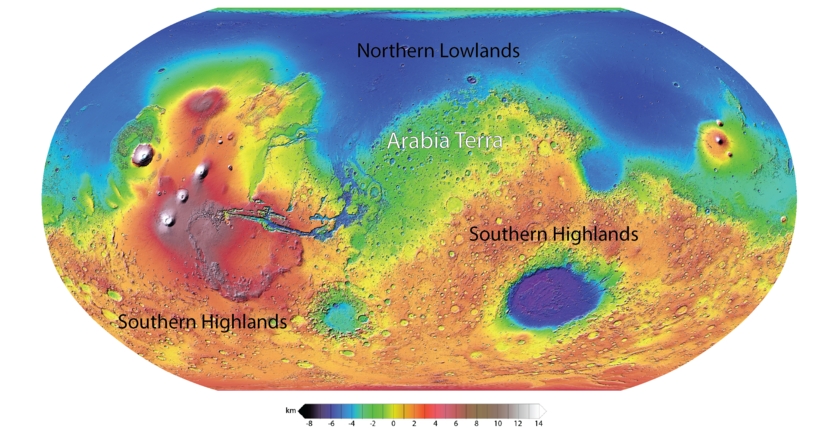 Arabia Terra is an ancient region that connects the southern highlands and the northern lowlands.

Most of the martian valleys are found around the equator, and many drain north towards Arabia Terra. However, before they reach Arabia, they are buried by the kilometre-thick rocks that make up Meridiani Planum. Meridiani is familiar to many as it is where Opportunity has been exploring for the last 11 years. Although Opportunity has found evidence for former lakes, these are younger and unrelated to the valley networks. On the other side of Meridiani, the valleys do not clearly re-emerge.

This presents a couple of interesting questions: if early Mars was “warm and wet”, as many geologists think, why is there little evidence of it in Arabia Terra, one of the oldest martian terrains and seemingly the natural pathway for many of the valley networks further south? And if Arabia really was as dry and barren as it seems, why was this the case? 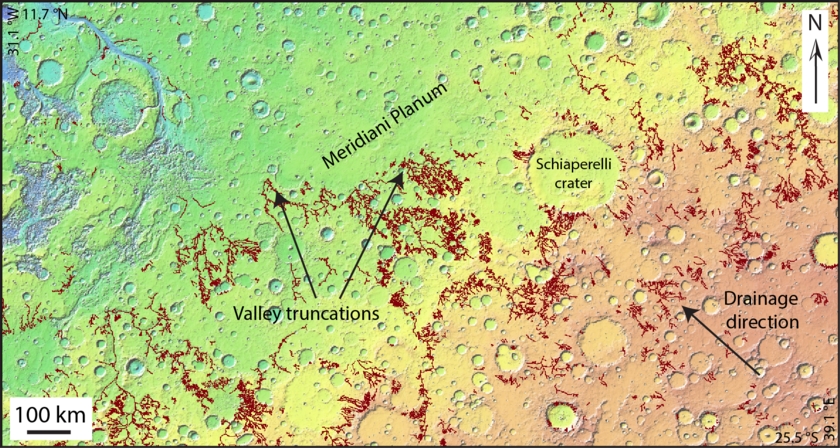 Topographic map showing valley networks (red lines; from Hynek et al., 2010) flowing north from the equator terminating at the Arabia Terra boundary. They are truncated by the younger rocks which make up Meridiani Planum and do not clearly re-emerge on the other side.

Recent models of the global martian climate have indicated that early Mars may have actually been frozen, with large ice-sheets covering its highland regions. These models suggest that episodic heating events, such as through impacts or the release of volcanic gases, could, occasionally melt the ice, producing liquid water. This could explain why Arabia is not dissected by valleys—ice cover did not extend down into the low elevations of Arabia Terra.

This prompted my colleagues and I to investigate the region further. We were already interested in Arabia Terra because of a hundred kilometre long ridge about 600 km north-west of Opportunity, which we’d interpreted as the remains of a former river channel—and that was apparently occurring in isolation. We’d named this feature Aram Dorsum, and unlike most valleys and channels on Mars, it was preserved as a ridge—or an inverted channel. 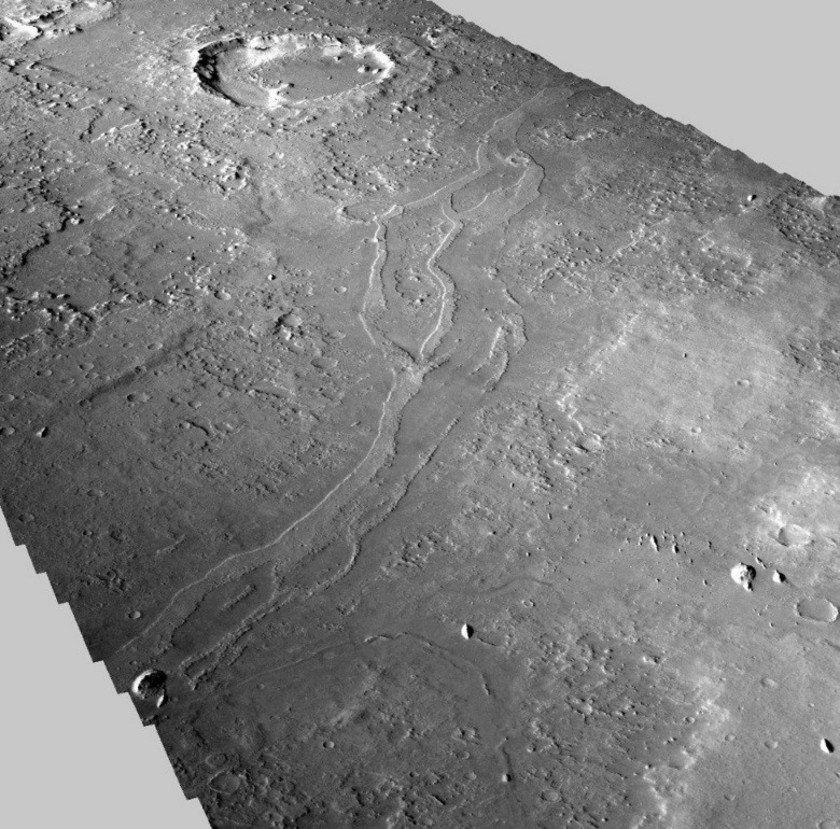 Perspective view of Aram Dorsum, an inverted channel on Mars and candidate landing site for the ExoMars rover, one of many such former river systems throughout Arabia Terra.

A river preserved as a ridge seems like a bit of a paradox, but inverted channels are fairly common on Mars. They occur when the river sediment within the channel becomes resistant to erosion (this can happen chemically, due to interaction with water, or by the deposition of large pebbles and boulders within the channel). Once the channel ceases to flow, the material adjacent to the channel—perhaps flood plain deposits—gets eroded at a faster rate than the channel, leaving the channel upstanding in the landscape. Inverted channels are also found in desert environments on the Earth, such as in Oman or Utah, where low rates of erosion can aid with their preservation. 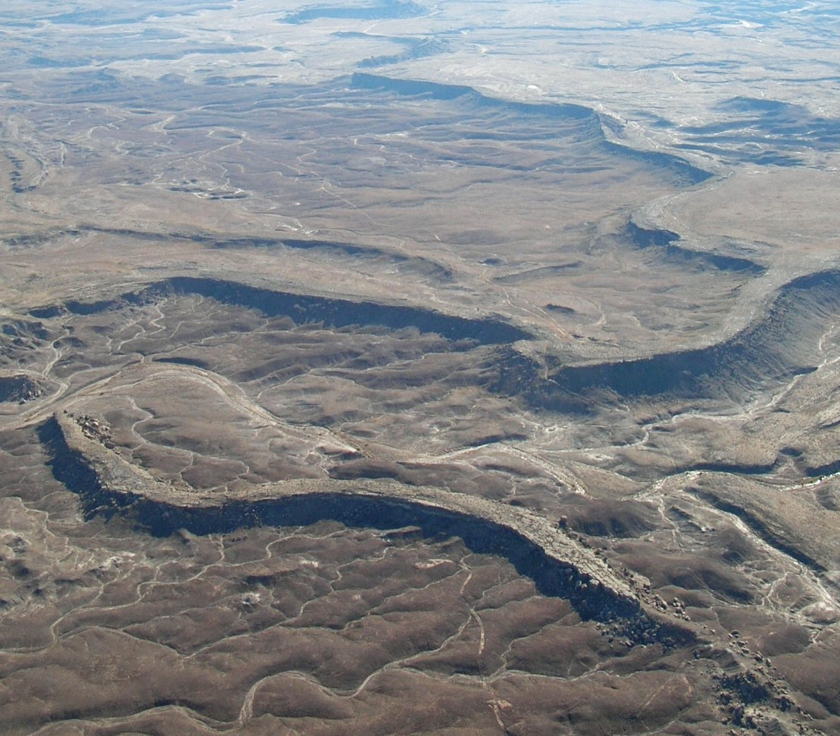 Aerial view of inverted channels on Earth, south-west of the Green River, Utah.

Aram Dorsum is one of three candidate landing sites for the ExoMars rover, due to launch in 2020 with the main objective of searching for traces of past and present life. We were interested in investigating the surrounding region to provide some context for any potential future landing. Sure enough, we soon realised that Aram wasn’t alone—many such inverted channels were present nearby and in the wider Arabia region.

Unlike the valley networks, which appear to mostly be cutting into basaltic lava plains and impact crater ejecta, the inverted channels seem to be surrounded by material similar in composition to the channels themselves. This, and that we observed only small changes in elevation in the downstream direction of the inverted channels, may mean that much of Arabia Terra was once a giant and relatively flat flood plain, through which rivers once meandered. Arabia Terra appears to once have been very wet indeed!

Many of the inverted channels interconnect with the valley networks to the south, meaning that much of the water and sediment transported from further upstream in the highlands may have passed through Arabia Terra, and that much of it will have been deposited here within the Arabia Terra flood plain. Aram and the other inverted channels also appear to have been buried, not long after their formation in the Noachian, by hundreds of metres of sedimentary rocks, including those that make up Meridiani Planum.

A flood plain setting and rapid burial means that Aram fits nicely with the goals of the ExoMars mission—potential organics and traces of life could have been sourced from a wide area, deposited in the flood plains around the channel, before being buried and preserved for billions of years, which would have protected organics from harmful radiation. The other two candidate sites—Oxia Planum and Mawrth Vallis—are also found within Arabia Terra, near the northern boundary of the region. Both these sites contain thick stacks of clay minerals, which can form due to interaction with water, and are also good at preserving organic material. 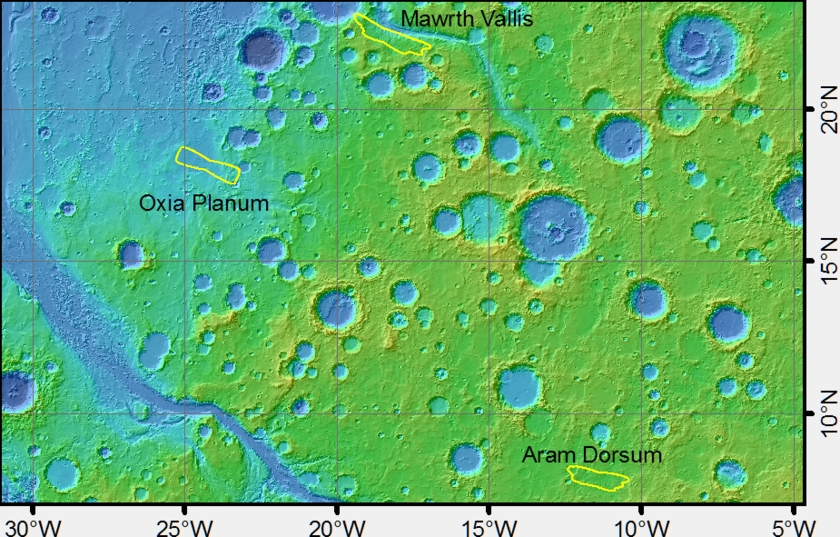 The ExoMars rover will definitely land at one of these three sites, all of which are within or closely bordering Arabia Terra. From a geology perspective, the appeal of all the sites, but in particular Aram, is compelling. At Aram, we’d be about 1 kilometre down in the stratigraphy (the geological rock record), relative to Opportunity on Meridiani Planum, and nearby enough, perhaps, to start to tie the rocks at both sites together. In doing so, we’d hopefully start to understand the wider changes that went on in Mars’ early climate—from the clearly wet, flood plains deep in the Arabia Terra stratigraphy, to the dryer environment up on Meridiani Planum. 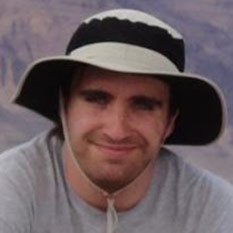