When you see an image from Mars do you ever contemplate what it took to bring it to you? You might imagine the feats of engineering that were required, but you may not have considered the lengthy process it took just to pick a place to land. For several years now, scientists from around the world have been gathering to discuss where we will send the next rover, Mars 2020. There have now been three formal landing site selection meetings, but even before those happen, individual scientists working on mission instrument teams have been devoting huge amounts of time to investigate the merits of the possible sites.

During our February 2017 team meeting, one of the important topics of conversation was the question of where our team thinks we should land the rover in 2021. The third official NASA Mars 2020 Landing Site Workshop would be held immediately afterward, so our primary focus was to review the eight remaining candidate landing sites and discuss whether we as a team thought some sites were more conducive to fulfilling the mission science objectives than others. We wanted to prepare our recommendations so that our favorite sites would not be voted off the island of Mars Landing Sites.

A. Geology. Characterize the processes that formed and modified the geologic record within a field exploration area on Mars selected for evidence of an astrobiologically-relevant ancient environment and geologic diversity.

B. Astrobiology. Perform the following astrobiologically relevant investigations on the geologic materials at the landing site:

D. Preparation for Humans. Contribute to the preparation for human exploration of Mars by making significant progress towards filling at least one major Strategic Knowledge Gap (SKG). The highest priority SKG measurements that are synergistic with Mars 2020 science objectives and compatible with the mission concept are: 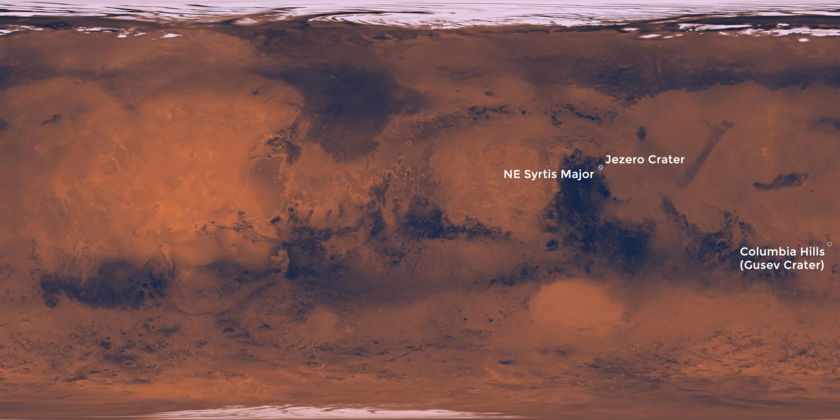 You can learn about the landing sites here. Following are some quick summaries.

Jezero is a 45-kilometer-wide impact crater that contains within it an ancient, eroded remnant of what may once have looked much like what we see of the Mississippi delta in Delta National Park. A major difference between these sites is that the Mississippi delta is only about 100 million years old, having formed during the Cretaceous period, whereas the Jezero delta is perhaps 3.5 to 3.8 billion years old. This is several billion years older than any delta that we see on Earth today! Earth has been so much more geologically active than Mars in the past few billion years that any evidence of ancient deltas on Earth has already been destroyed. 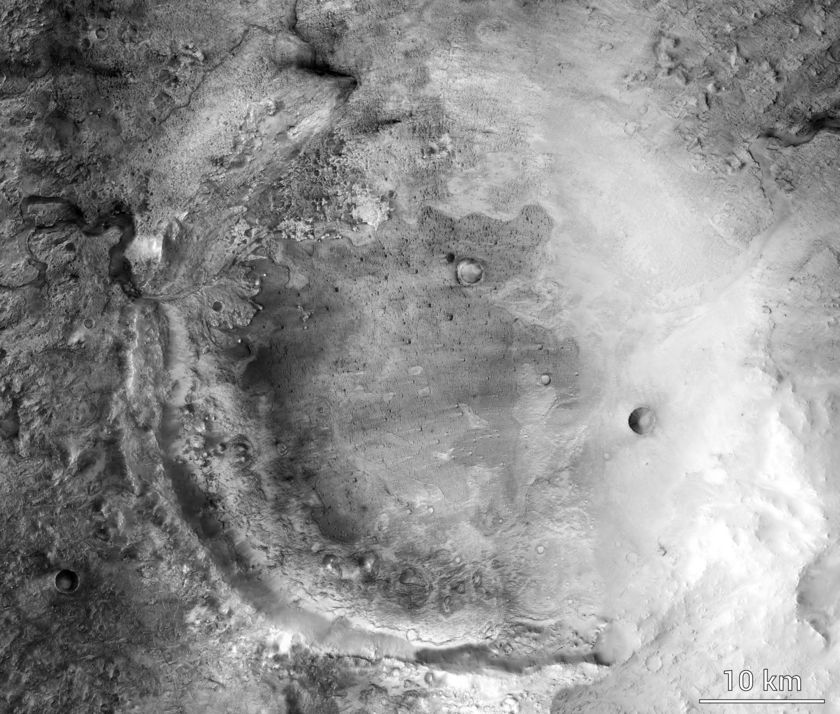 This 10 m/pixel resolution mosaic of Jezero Crater was created from images taken by the Mars Reconnaissance Orbiter Context Camera (CTX). (Click on the image for a full-resolution view.)

From orbital images, scientists have determined that Jezero once hosted a lake, about the size of Lake Tahoe or Lake Winnipeg, that had a watershed of over 30,000 square kilometers. It was an open basin, with two inflow channels and one outflow channel. To form a delta, water must flow through an area for a very long time, for thousands of years or more. The longer liquid water is present in an environment, the more hospitable it would  have been for life. Deltas are also great for preserving evidence of life, if it developed on Mars. In Jezero crater, we see signs of clay minerals having been transported in to the lake, and we also see carbonate minerals that would have precipitated in the lake. On Earth, these kinds of minerals occurring in relatively low-energy sedimentary delta environments can preserve organic matter. So if life ever developed on Mars and occurred in Jezero crater or its watershed, the delta deposits could potentially preserve it.

Outside of potential organic matter preservation, investigating Jezero geology could also help us put limits on how old the surface of Mars is. The crater floor appears to contain volcanic lava flows. One of the objectives of the Mars 2020 rover is to cache samples for their eventual return to Earth. If this mission succeeds and we are able to return samples, we could use radiometric dating to determine the absolute age of those lava flows. That, in turn, would allow us to pin one point in Mars' geologic history to a specific age and inform us about the maximum and minimum absolute ages of other terrains that pre- and postdate the lava flows on the crater floor.

The Mars Exploration Rover Spirit explored the Columbia Hills during its seven-year mission, from 2004 to 2010. Spirit's science team found a variety of geologic units along the traverse near the Columbia Hills within Gusev crater, including one volcanic unit and one potentially hydrothermal region. The landing site is volcanic, similar in composition to the Columbia River Flood Basalts in the U.S.'s Washington state. The main potential landing area of interest for Mars 2020 is a proposed hydrothermal site, which may have once been like some of the hydrothermal regions within Yellowstone National Park. The rover would have to land on the flat-lying volcanic rocks and trek about five kilometers to the interesting hydrothermal deposits. The drive could take from three to six months because Mars rovers move at only a fraction of average human walking speed, and available power usually limits their drives to one to two hours per day. 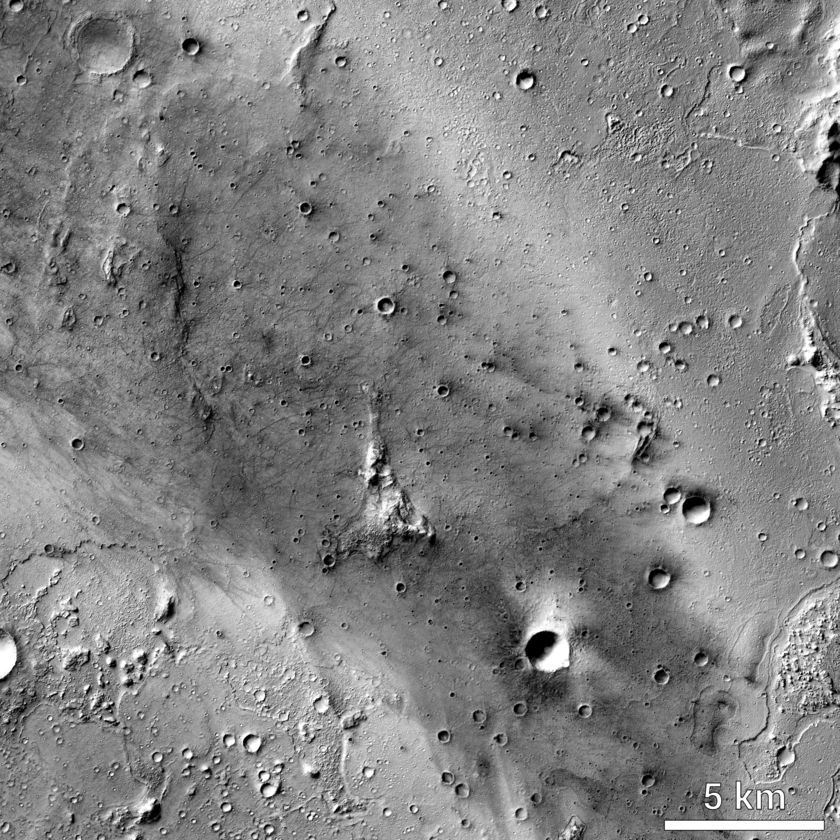 This 5 m/pixel resolution mosaic of the Columbia Hills in Gusev Crater was created from images taken by the Mars Reconnaissance Orbiter Context Camera (CTX). (Click on the image for a full-resolution view.)

During the initial several months of travel, the rover could sample and collect volcanic rocks. As described for Jezero, volcanic rock samples returned to Earth could help to put constraints on the age of this part of Mars. Once the rover arrives in the area of possible hydrothermal deposits, there is a wider variety of samples for it to collect, including volcaniclastics (rocks made up of older volcanic sediments), opaline silica (fine-grained silicon dioxide minerals, which may be hydrothermal and, on Earth, are sometimes formed biologically), and fine-grained sulfur-bearing minerals.

Northeast Syrtis Major is comparable in topography, although not in rock type, to Badlands National Park in South Dakota. It sits between two igneous volcanic regions and contains mixtures of volcanic and clay minerals. The presence of clays suggests significant past alteration by water. There are also carbonate and sulfate minerals, which not only indicate past water but can also be good at preserving "biosignatures", or evidence of preservation of organic matter. It has been proposed that many of these alteration minerals may have formed in a long-lived subsurface groundwater and spring system within this ancient volcanic terrain. 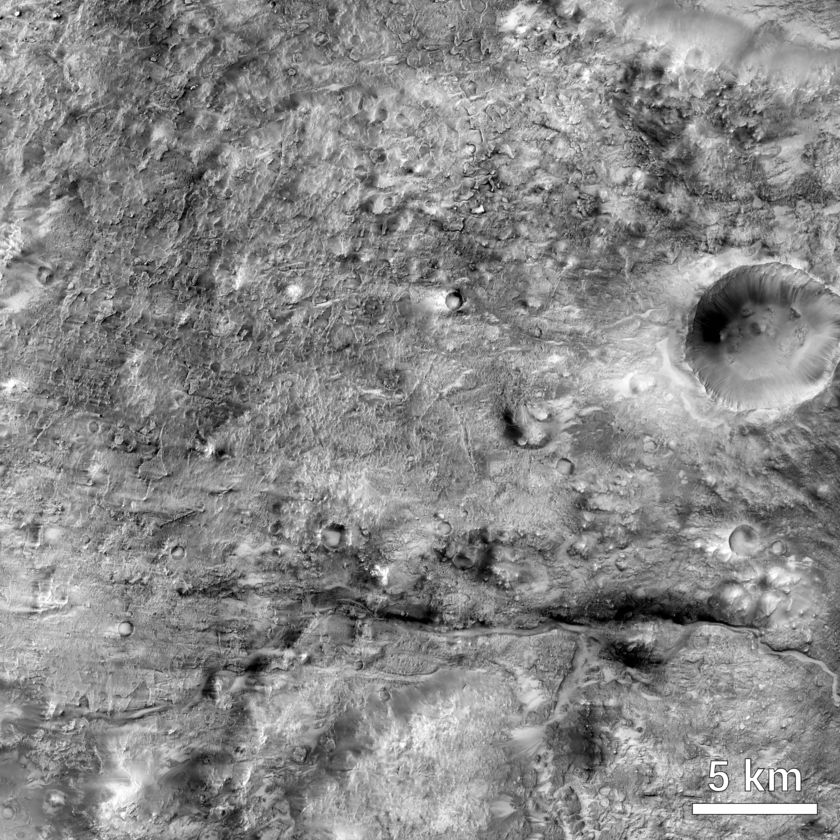 This 5 m/pixel resolution mosaic of the proposed landing region in NE Syrtis Major for NASA's Mars 2020 rover was created from images taken by the Mars Reconnaissance Orbiter Context Camera (CTX). (Click on the image for a full-resolution view.)

This site is geologically very old. It is so old, in fact, that it could help us learn about the first four or five hundred million years of Mars’ four-and-a-half billion year history. The gases trapped inside the volcanic glasses at this site could tell us about the early history of the atmosphere of Mars (was it persistently warm and wet?), if we were to collect samples for analysis by the rover and eventually get them returned to Earth.

Unlike the other two sites, Northeast Syrtis Major is a so-called "land-on" site. That is, the main regions of interest would probably be available to the rover immediately upon landing, without requiring months of driving.

Next Steps in Landing Site Selection

A date for the next landing site workshop hasn't been set yet. It will be exciting when we find out exactly where we are going to land so we can start to focus all of our energies in that direction! In the meantime, scientists and engineers around the world are working on the technical aspects of the 2020 rover, as well as further research on the remaining three sites to determine where would be best to land in 2021. 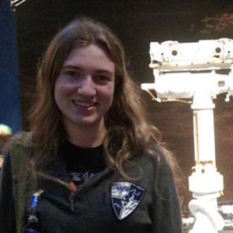 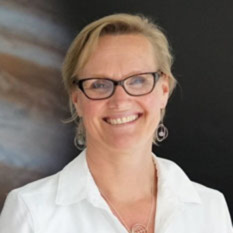 For the Columbia Hills option, I wonder if the travel time could be drastically shortened by closely following MER-A's path, maybe even following in its trackway (except for 2-3 places where MER-A got stuck). All the ground photography would be done in advance and they'd know in advance that the rover wouldn't sink into ground. More fantastical but still, I wonder if it could nudge MER-A so its solar panels are facing the right way and see if the thing would turn on again....

It is shocking that Gusev made this list. MER-A was almost a washout until it got into the Columbia Hills. I would be very dismayed if 2020 went back there when there are so many other spots on Mars to explore. It would be interesting to find out why some sites were rejected. A few years ago I thought that Mawrth Vallis was the leading site with its different clay minerals and its "land-on" status.

I like the idea of exploring Jezero. The opportunity to get more intel/scientific information on a delta would be huge in figuring water tables, geotechnical engineering possibilites, tree life, plant life, etc.

space exploration is an area that is yet to be fully explored.

LAS CRUCES, New Mexico — NASA has begun drafting guidelines to protect the Apollo 11 and Apollo 17 landing sites, listing them as off-limits, and including ground-travel buffers and no-fly zones to avoid spraying rocket exhaust or dust onto aging, but historic, equipment.

My inital choice would have been Columbia hills because of the wider variety of samples the rover could collect, but i was very suprised that it would take several months to reach the hydro-thermal deposits. My choice would be Northeast Syrtis to find out about the first four or five hundred million years of mars.