Where did you venture to view the Great American Eclipse? About 100 people were lucky enough to make the trip of a lifetime for it: 38,000 feet above the Pacific Ocean, courtesy of Alaska Airlines.

Last year, veteran eclipse chaser Joe Rao amazingly managed to convince Alaska Airlines to alter the departure time and flight path of one of its flights out of Hawaii in order to catch a total solar eclipse—and the results were stunning. For this year’s Great American Eclipse, Alaska Airlines decided to take it a notch further thanks to another suggestion by Rao, planning a special charter flight for invited scientists, eclipse chasers, journalists, and a few lucky Alaska employees to view the eclipse. Thanks to Twitter, I was lucky enough to be one of two astronomers invited onboard.

The day started quite early on August 21st. We were instructed to arrive at the Portland airport (PDX) no later than 5AM. After a long TSA security line, I made my way to the two adjacent gates Alaska Airlines had taken over for the event. It was quite a sight to see: Big light-up boards about the eclipse, TV cameras being set up, and a wall full of Voodoo Doughnuts to pump us full of sugar—as if we needed any more excitement! 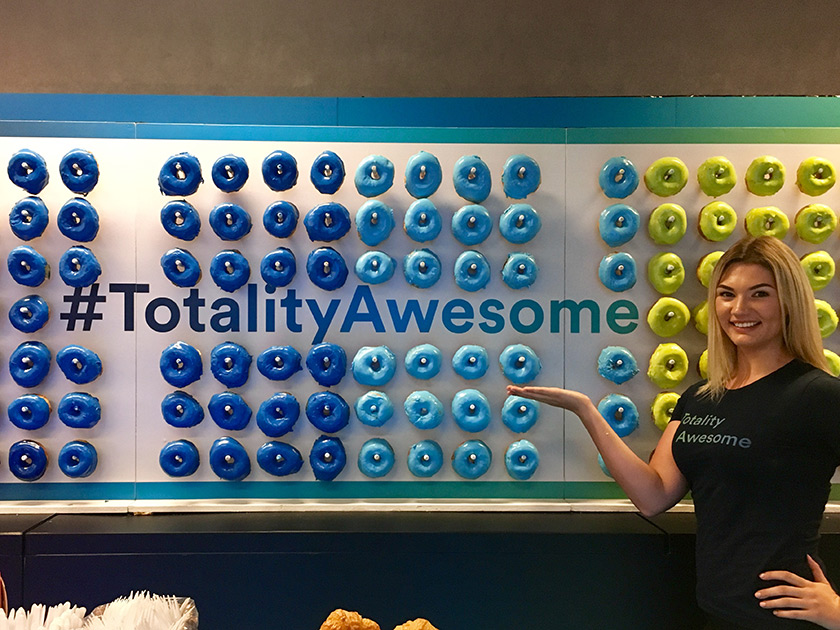 For a couple of hours, local news media mingled with the flight passengers, and Alaska Airlines held a press conference describing the flight plan. Many passengers making their way past the spectacle to their own flights stopped to see what was going on, pulled out their phones to take photos, and some even popped in for the doughnuts.

Around 7AM, the real fun began as we boarded the Boeing 737-900 that would carry us to totality. While the plane was capable of holding about 180 passengers, Alaska intentionally only put about 100 people onboard so that nearly everyone could comfortably be on the eclipse-facing side of the aircraft. Each of the “eclipse experts” on the plane (myself included) was paired with a journalist in the row where they were seated. I had the pleasure of being paired up with Alex Johnson of NBC News.

Our MC for the flight kicked things off on Alaska Flight “Solar 1” by treating things like a space flight, telling us to put our tricorders into airplane mode as we readied for launch. An eruption of applause accompanied liftoff of the plane from the runway. 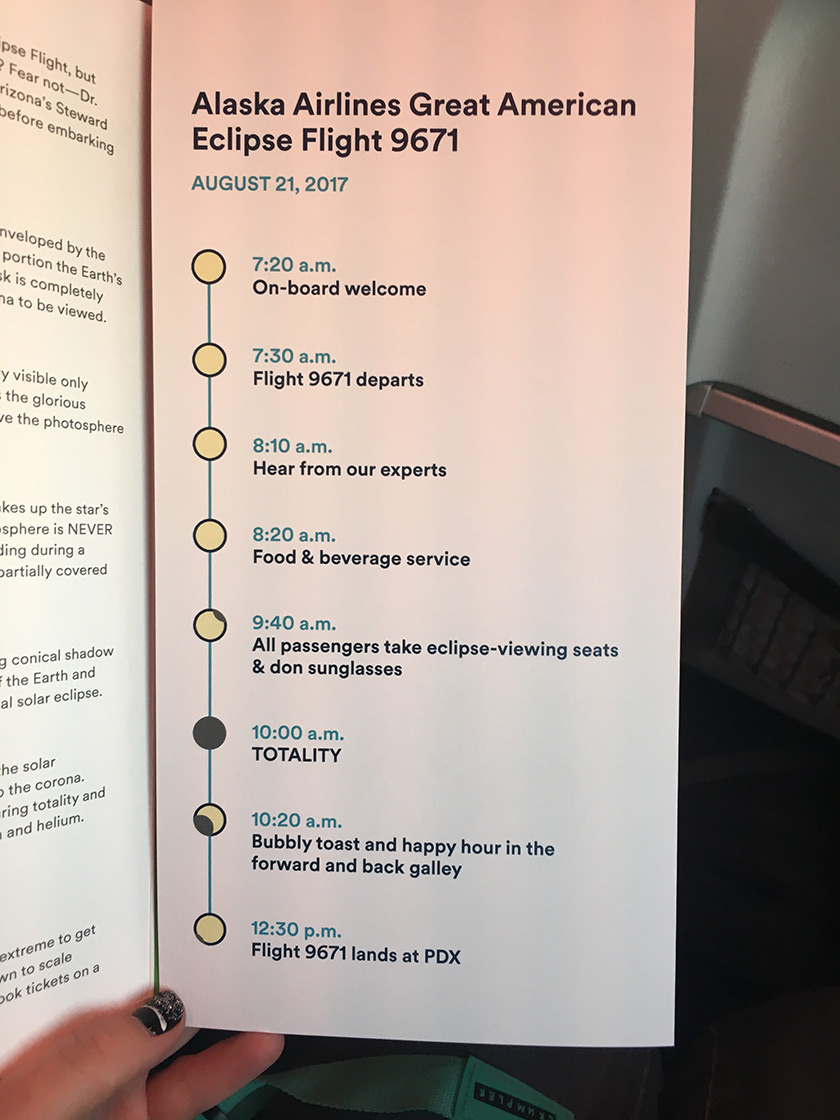 University of Arizona astronomer Glenn Schneider teamed up with two Alaska Airlines pilots, Captains Brian Holm and Hal Andersen (who piloted our aircraft that day), to calculate the ideal location for the Boeing 737 to intercept the eclipse. This blog post on the Alaska Airlines website explains in detail exactly what went into this process. In order for the eclipse to be directly visible, the sun needed to be in the line of sight of the airplane windows at an angle of about 25° above the horizon. The only location where this was possible turned out to be about 800 miles off the coast of Oregon. This would require a 5-hour round trip flight. Wyatt Curtis, Alaska Airlines staff writer, described it as, “Perhaps Alaska’s longest-ever flight to nowhere.” 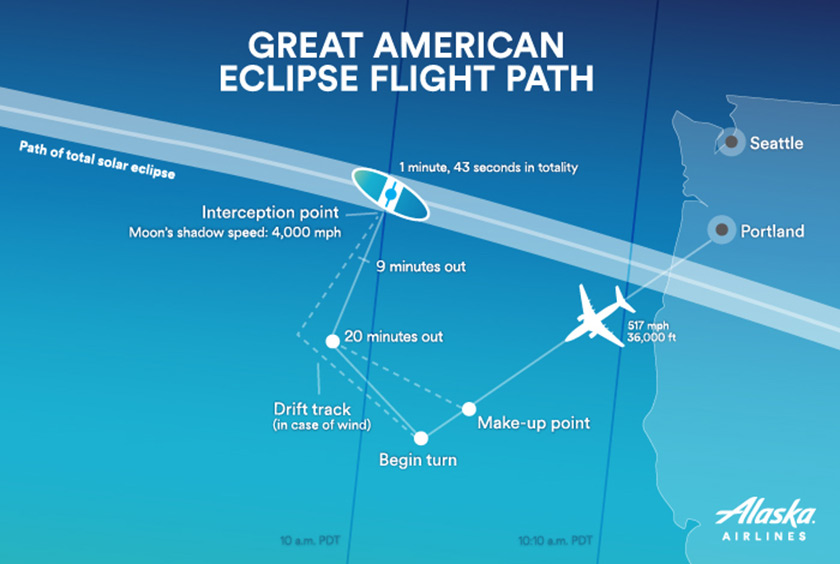 During this transit time, experts onboard, including NASA astronaut Dr. Michael Barratt and Arizona State University astrophysicist Dr. Evgenya Shkolnik, delivered short science talks. Eclipse chasers and journalists mingled throughout the cabin, undoubtedly anxiously awaiting the big moment. All the passengers were given goodie bags that included (among other things) a mission patch celebrating the flight, and a pair of eclipse viewing glasses. 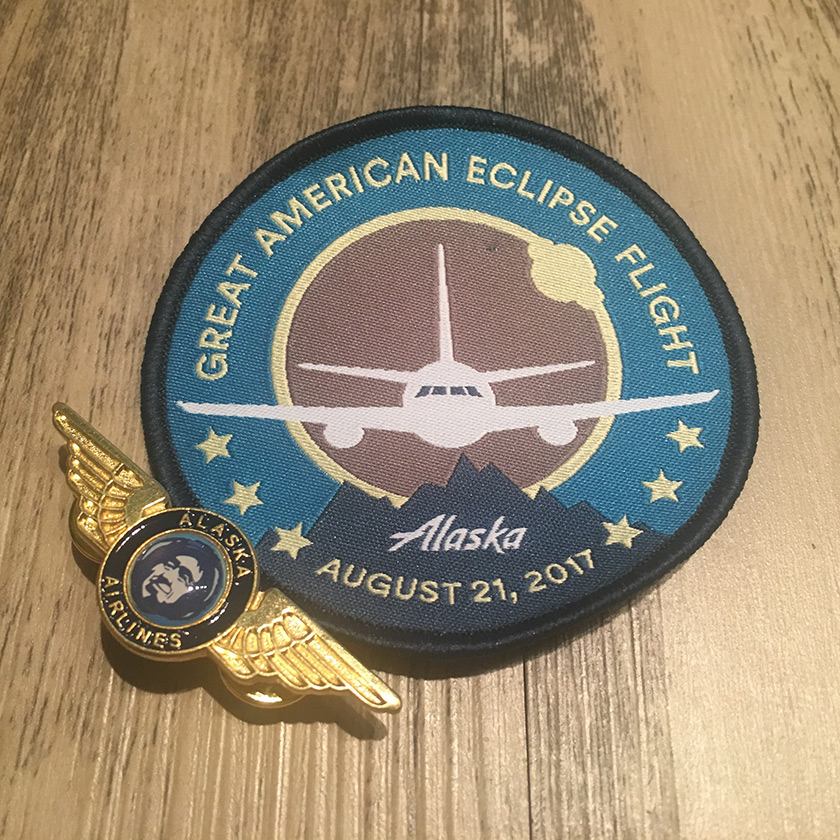 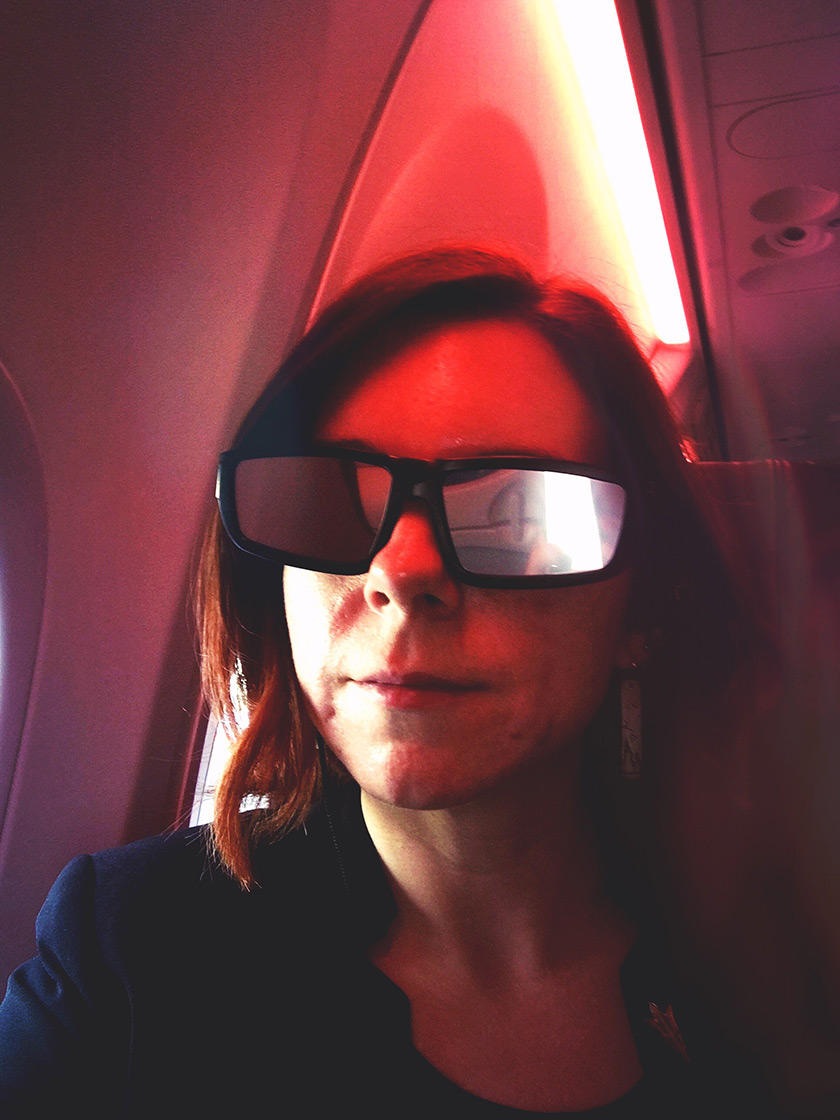 As we approached the totality interception point, the pilot came on over the speakers and exclaimed, “Glasses on! Glasses on!” Faces and cameras pressed against every window on the right side of the plane as we all gathered to watch the 103 second event we’d travelled so far to witness. The pilot came on over the speakers again to announce, “Shadow approaching from the left!” At T-minus 10 seconds, we all started counting down in unison until totality. Then the sounds of awe filled the cabin. The sky quickly darkened to the point where it felt for a brief moment like we were actually on a spaceship—although the yellowed hues of the clouds beneath us made it feel a bit like we were circling Saturn rather than Earth. The experience was truly otherworldly.

After basking in the glow of the post-totality sun, the plane began its journey back to PDX. Celebratory cheers and champagne began to flow. The journalists onboard scurried about, interviewing passengers to ask about their experience. This was my first total solar eclipse. Even knowing scientifically what was going to happen, I was not fully prepared for how stunning it would truly be in person. 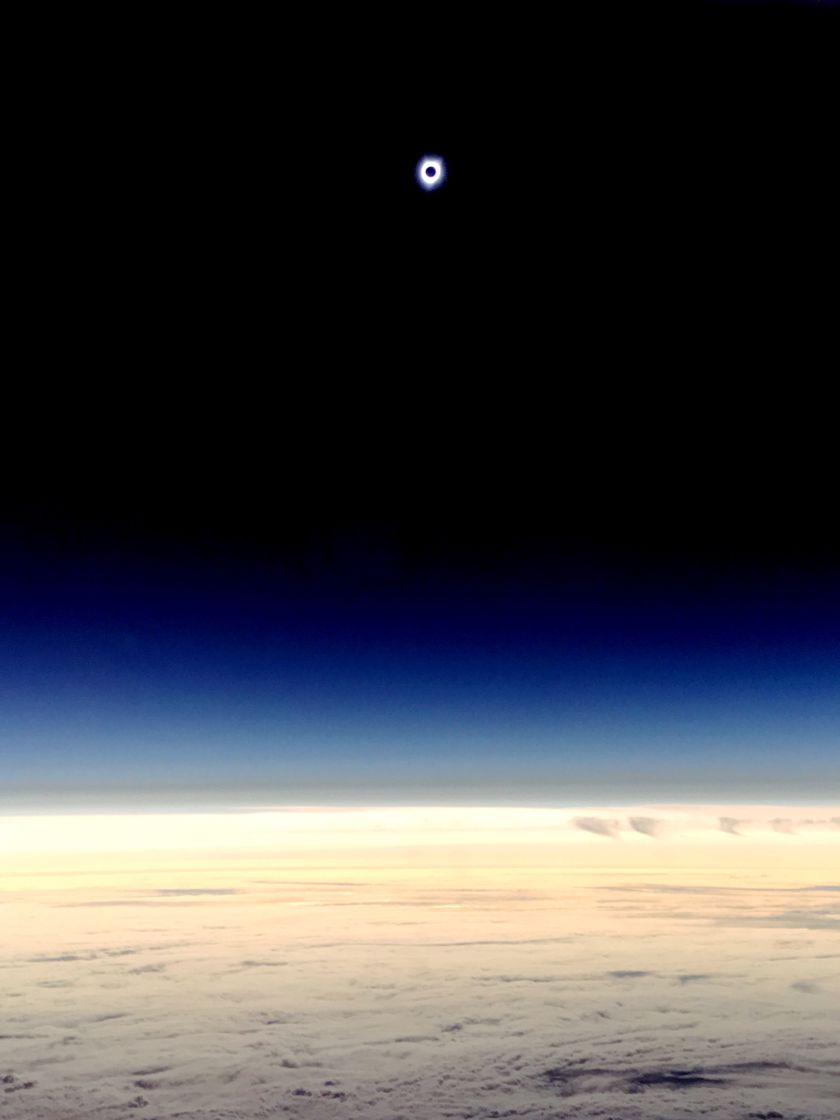 The 2017 total solar eclipse, as seen from an Alaska Airlines flight.

The flight was a masterpiece of mathematics and celestial mechanics converging for an experience like no other.

This Is Amazing! What an incredible feat & a great story!