Since my last post Opportunity has successfully driven from the summit of Cape Tribulation (the name we gave the highest point on the rim). The goal has been to arrive at a deep notch or valley ("Marathon Valley") in the crater rim by about March 15. Remote sensing from the orbiting Mars Reconnaissance Orbiter (MRO) has shown that some spectacular exposures of weathered and altered minerals should be exposed there. That is always a clue that it is geologically very interesting in more than just minerals and chemistry. It probably means that all sorts of interesting things are going on that will give us a few more clues about the past climate on Mars. 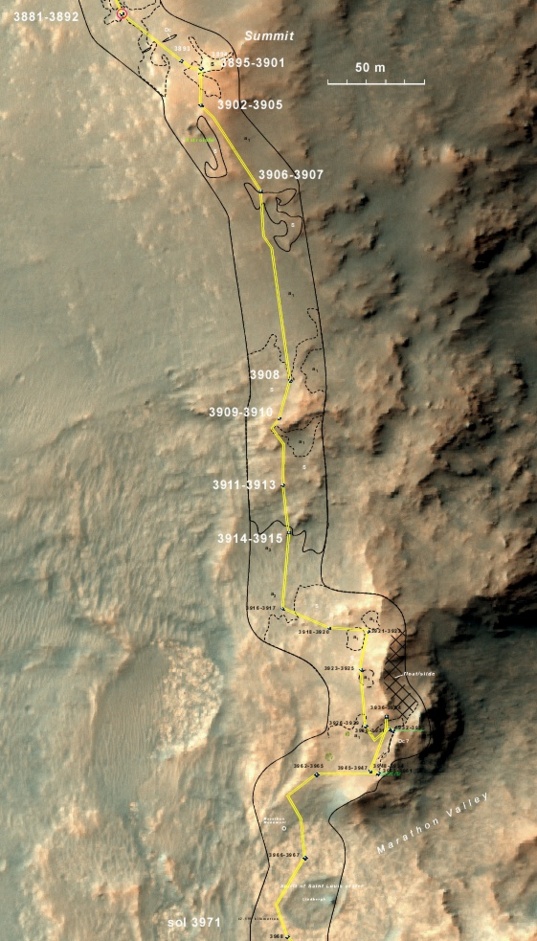 Above is a view of the traverse along the rim of Endeavour crater since the last report. Opportunity has descended from the highest point on the rim to a deep valley cutting through the rim of the crater. 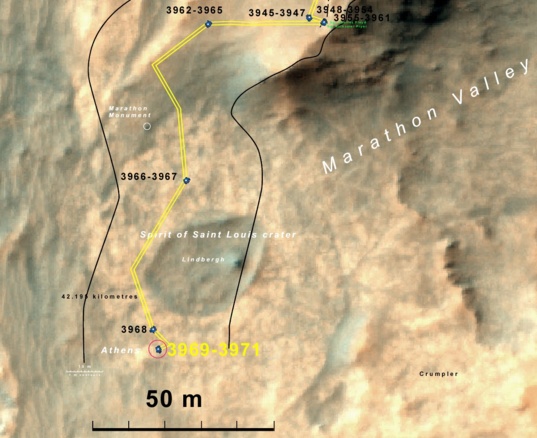 And this zooms into the current location. Notice the odd circular feature just to the north. That is the odd feature visible in the Navcam panorama below.

Along the way Opportunity stopped to look at some strange dark rocks. Using a Corps of Discovery (Lewis and Clark) naming theme during this phase, one rock, "Jean Baptiste Charbonneau", turned out to be unlike any rock we have looked at before. It plots in the intermediate volcanic rock field of chemical classification. It is purplish in color and reminds me chemically, texturally, and in color of benmoreites exposed in the volcanic field north of Mount Taylor in New Mexico. Maybe the Martian highlands are one giant alkali basaltic volcanic province. 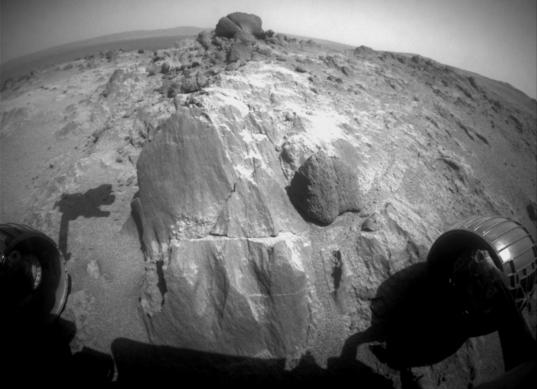 The one on the right is an odd composition, more like chemically intermediate volcanic rocks on Earth than most basaltic rocks on Mars.

Opportunity wins a marathon. As Opportunity drove into Marathon Valley on sol 3968 (March 24) it exceeded 42.195 km of total traverse, or a marathon distance, since landing on Mars. 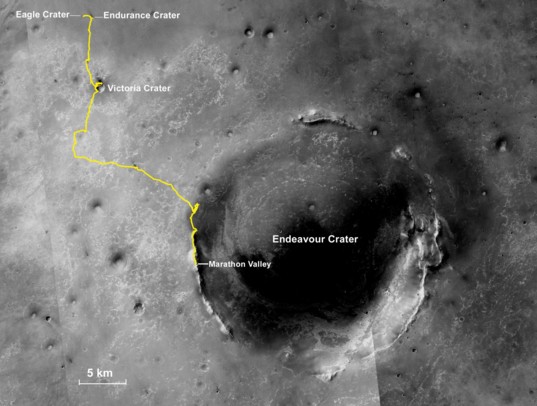 Opportunity's total traverse since landing on Mars in January 2004

As of March 25, 2015, Opportunity has driven 42.195 kilometers across the surface of Mars. It also just fixed a flash memory problem.

Driving 42 km and lasting 11 years, which seemed impossible 10 years ago, prompted many people to ask, "What is next for Opportunity, 100 km? Ha!" So I prepared the following "strategic plan" for accomplishing that goal in my March 25 Long Term Planning uplink report. The engineers thought it was outrageously funny. No one on the science team laughed: We have gone through this outlandish prediction sort of thing before only to discover years later that it was not so outlandish. 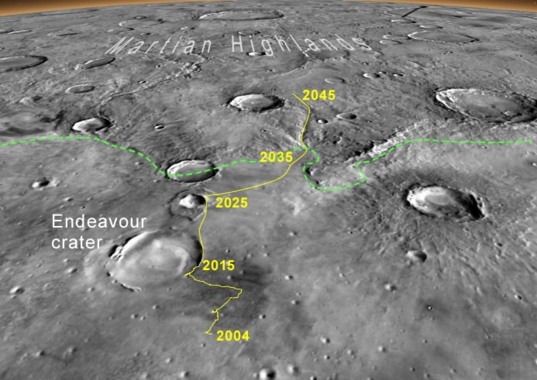 Here is a "strategic plan" that I posted in my LTP report this week. No one on the team laughed much!

We are now at the entrance to Marathon Valley near an odd feature named "Spirit of Saint Louis" crater. This is one of the most alien scenes yet. And the geologic questions are numerous. What is the dark rubble pile of rocks? Are they older than the crater ejecta here? Why are they inside a large circle of dark soil and surrounded by bright outcrops? What are the bright outcrops? More ejecta or something else. We will be exploring many of these questions over the next couple of weeks.

This Navcam panorama was acquired after arrival in Marathon Valley. The view looks like something from Mars. Wait! We are on Mars!

Press Release Images related to Opportunity's marathon are at:

Meanwhile, back in Earth orbit, the International Space Station crew participated in our uplink process by looking at the same Navcam scene and picking Pancam targets. 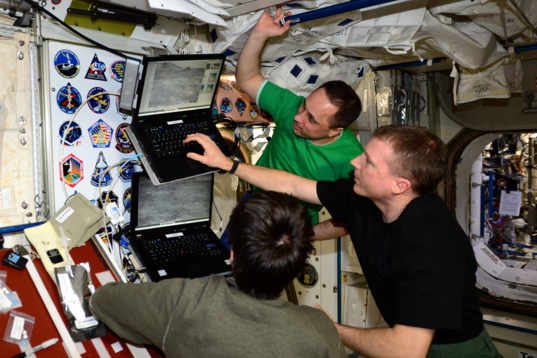 The ISS crew gathers around a couple of laptops to view the Opportunity Navcam panorama shown above.

The mythology of Opportunity begins: http://xkcd.com/1504/