Due to a nearly continual wind or breeze at the winter location on Murray Ridge here at Endeavour crater, the solar panels are cleaner than they have been in years. The dust factor is in the high .8s (dust free = 1.0, half dust covered = 0.5). After most recent winters the dust factor has been around 0.45 - 0.50. 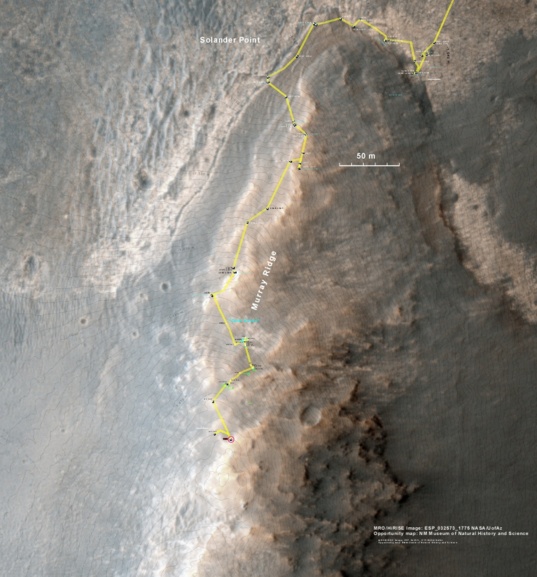 Opportunity's current location is on the rim of Endeavour crater and Murray Ridge. After we take a look at the local outcrops up here on the ridge crest, and maybe drive to the local summit for a good view of the crater, we will start driving south along the west side of the rim. 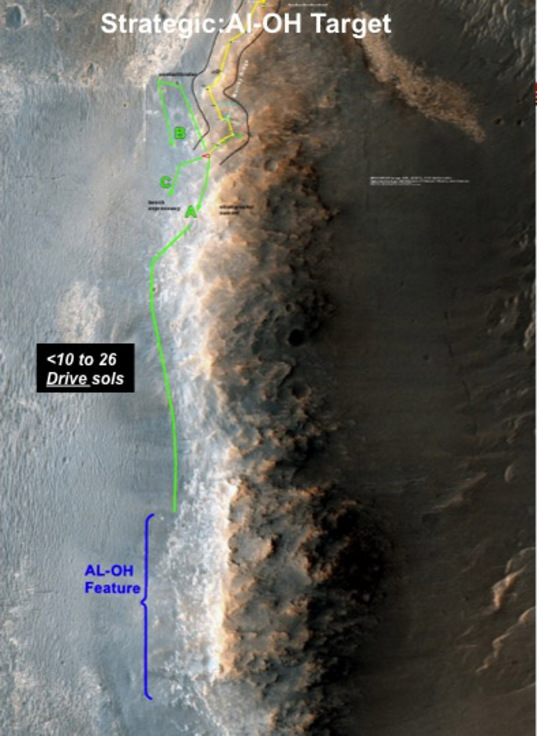 The next long-term target is about 600 m south along the west side of the crater rim. There are some large outcrops down there and the orbital remotes sensing suggests that there are significant clays. WE want to get a handle on how the clays form, and what was the environment of formation for the rocks that the clays occur in. 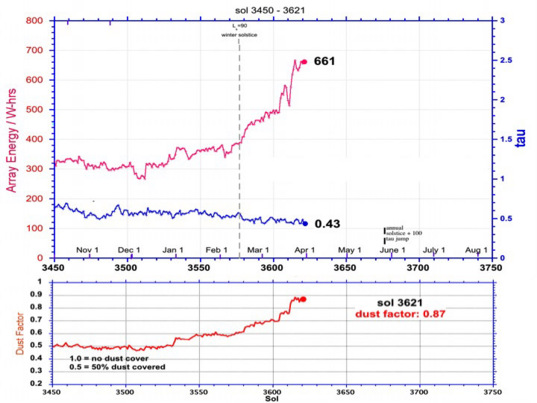 Power has been steadily increasing. The wild thing is that it was already increasing before winter solstice thanks to continual solar panel cleaning. The dust factor is outrageous. The panels are just 13 percent shy of being as clean as they were the day Opportunity landed!

There is a lot of rubble between outcrops. Note that Opportunity is starting to do shadow selfies again. 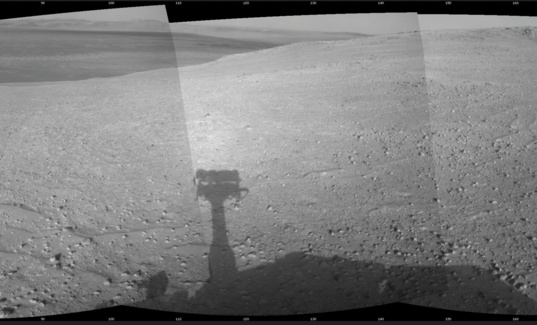 It is even doing shadow selfies with Navcams. Here it is two sols ago approaching the outcrop where it is situated on this sol. WE believe these outcrops to be some of the impact breccias that make up the upper parts of the crater rim. But a few sols ago we were seeing some dark rocks that were not breccias. So we are making certain that we know what the distribution of lithologies are here before we start trekking south. We might see these rocks again and it would help if we have a good handle on them.

The same scene as above, but the part looking out across the Endeavour crater floor

The same scene as above, but the part looking out across the Endeavour crater floor. Note the small impact crater on the far rim, which is 22 kilometers away. The floor of the crater, which is equivalent to the Valle Grande here in New Mexico, is covered with dark sands.

The outcrop in front of Opportunity as of sol 3623

The outcrop in front of Opportunity as of this sol. It looks like we will continue to drive south. This turns out to be a difficult outcrop to get wheels on top of. Right now the thinking is that we will go ahead and drive to the local summit for a good view of the crater interior and the drives ahead to the south.