On October 4, Jason Callahan posted a blog here, titled “How Richard Nixon Changed NASA.” His blog was based on a talk I had given at the National Air and Space Museum in Washington. That talk was, in turn, based on my forthcoming book After Apollo? Richard Nixon and the American Space Program (Palgrave Macmillan, March 2015).

I gave a similar talk the next week at the International Astronautical Congress in Toronto; Bill Nye was in the audience there. One anecdote in the talk struck Bill as extremely symbolic of how the decisions made by Richard Nixon in late 1969 and early 1970 effectively ended human exploration beyond Earth orbit for the indefinite future. He asked me to capture that anecdote in a guest blog, and here it is.

In my Washington and Toronto presentations, I showed the photograph below. It was taken in December 1969 and shows Nixon at his Oval Office desk, meeting with science adviser Lee DuBridge (at end of desk) and Nixon assistant Peter Flanigan. Over Nixon’s right shoulder is the “Earthrise” photo taken by Apollo 8 astronaut Bill Anders on Christmas Eve 1968. Its presence in a prominent spot in the Oval Office seemed to indicate a positive Nixon attitude towards Project Apollo and space exploration in general. 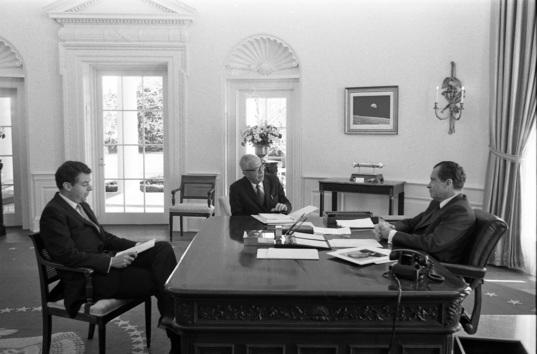 Indeed, Nixon had fully embraced the success of Apollo 11 in July 1969, calling the seven days of the mission “the greatest week in the history of the world since the Creation.” He had become the first sitting president to attend a human launch, sitting through a rainstorm to see Apollo 12 lift off in November. But his enthusiasm for human exploration was short-lived; by December he was already telling his associates that he did not see the need to go to the moon six more times. Then came the near-tragic Apollo 13 mission in April 1970. Nixon became emotionally involved with the fate of the astronauts, fearing that future missions could result in astronaut fatalities. If he could have, Nixon likely would have ended Apollo flights then and there, but the image of quitting after a problem overrode that impulse. Nixon tried hard during 1971 to cancel Apollo 16 and 17, only to be talked out of that step by his advisors.

Not only did Nixon propose a premature end to exploratory flights to the Moon; he was not willing to take the next step, setting out on a path leading to Mars. NASA had proposed to the White House in September 1969 that post-Apollo space activities be focused on preparing for human missions to Mars at some point in the 1980s. Nixon and his associates decisively rejected that proposal as they cut the NASA budget in the months following the Apollo 11 and Apollo 12 successes. In March 1970, the White House issued a presidential statement on space saying that “what we do in space from here on in must become a normal and regular part of our national life and must therefore be planned in conjunction with all of the other undertakings which are also important to us.” This dictate set the space program in competition with other government programs for resources. It has not fared well in that competition; From 1970 onward, NASA has not had a budget adequate to support a robust program of human exploration.

This set of decisions was reflected in a very visible way. Here is Nixon alone in the Oval Office, in a picture taken in September 1970. The iconic Earthrise photo - a lasting artifact of human exploration - had at some point in the preceding nine months been removed from the office wall, replaced by a generic landscape painting. Richard Nixon apparently did not want to be reminded of what remarkable things human explorers could accomplish as he made the decisions that would keep humans in low Earth orbit for the next half-century. 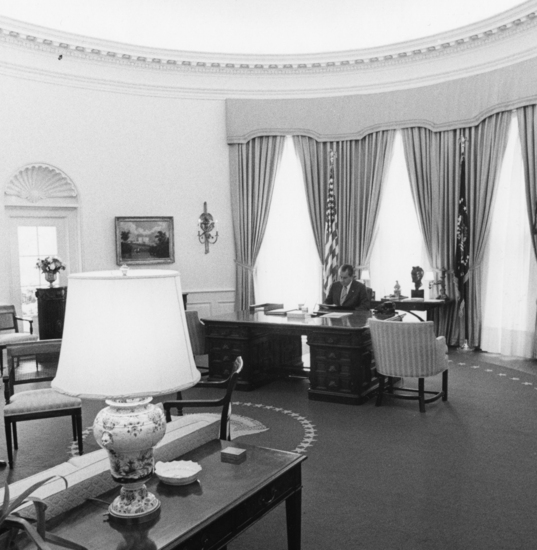 Nixon in the Oval Office, September 1970

Makes it more than a little ironic that it's Nixon's name that appears on all those plaques on the Moon.

Unfortunately that pre-Nixon era is gone and it is still an uphill fight to get it back. Orion, A.P.O.L.L.O. on 1 steroid, is not the answer. I suggested years back for a true Interplanetary Cruiser (with interchangable interior hulls, built in space was the intent) to the Augustine Commission but all that came out of that and other efforts was Orion as it currently is. That is not adequate. They want an A.R.M. but all they/we need to do is go to Mars orbit. There are 2 asteroids already there. From there the adventure would continue...

I remember NASA sending a P.A.O. to my Elementary School when I was in the 6th grade. He asked a question before his A.P.O.L.L.O. project question, How many of you would like to fly to the moon on a landing mission. Several hands went up including mine. I remember thinking they are clueless. I was the only one following Gemini in my class and I had also seen Wally Schirra's Mercury flight and I was hooked. I knew what it would take and I loved the idea of having an Astronaut/Pilot career. After the presentation the NASA guy asked that question again. This time only my hand went up. Star Trek had just started and by "The Corbomite Maneuver" I said to myself during the show, NASA this is where you need to go. As for now, yes NASA can do this one day. Sure, not that fast nor the transporter but a spacecraft of that size or smaller, we can do... if we want to. Orion clearly says we don't. Small dreamers don't win big prizes. Down the road they say Orion will carry us far and it is a 1st step. Well to those born after the 1st step, I say we took that step already. It's time for step two, not a repeat of step one in a larger shoe.