Rover Memory Hiccup. We need to re-do the plan from several days ago.

Flash memory or computer problems oddly occurred on both Curiosity and Opportunity around Feb 27. One possibility is that a large solar flare resulted in radiation at Mars sufficient to temporarily corrupt the memory on both rovers. Mars is currently a few weeks away from solar conjunction, so big flare could have happened on the other side of the Sun.

Opportunity has recovered from the event and is GO for planning a re-do of observations. We hope to have the data by Tuesday morning in time to plan a drive south.

One last outcrop, then solar conjunction

Opportunity is doing one last "hurrah" here at Cape York on a particularly interesting outcrop with a composition and structure unlike anything encountered before. We were about to start driving southward after the last stop, but the results came down from this strange outcrop. And unlike our tendency to avoid driving back to a previous spot, we decided we had to get more information on this rock unit. Then we have got to start driving south towards the next mountain.

Below are some images from the current location. The outcrop has a "boxwork" structure that on Earth would be the result of deep weathering of bedrock, such as occurs in tropical environments. The boxwork has a composition unlike the host rock. So the stop here is to get some more information about how it formed. Any way you slice it though, it means Mars was really wet when this happened.

This is a sol 3262 Navcam mosaic looking in the direction that Opportunity will be driving immediately after solar conjunction. You can see the mountain range to the south where we need to be by August 1. The dot at azimuth of 180 near the image center shows the direction that we will drive. Note all the tracks all over the place. We have been busy on this hill looking at things and trying to do a good job at it while we are doing it.

This is a view from the rover's front Hazcam of the outcrop. The view is north across the west flank of Cape York. So the mountains in the distance on the right are the northern rim of the 22 km-diameter Endeavour crater. 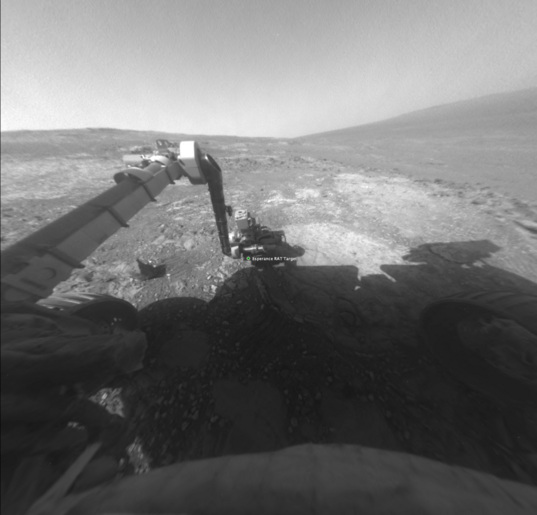 This is what the outcrop looks like from the Pancam. You can see the raised rectangular area and how it tends to encircle quasi-orthogonal cores of unaffected rock. 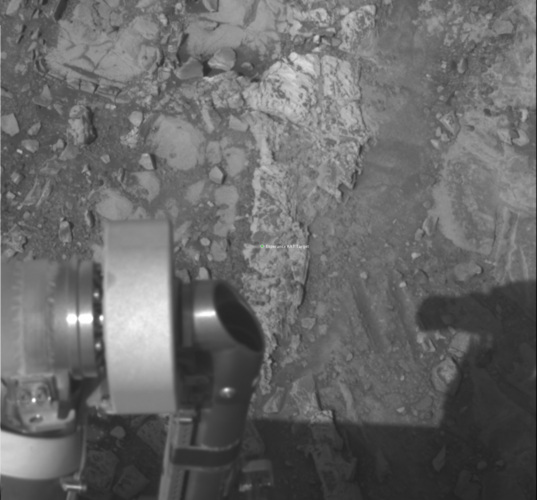 And this is a frame from the Microscopic Imager of the target. The image is about 3 cm across. 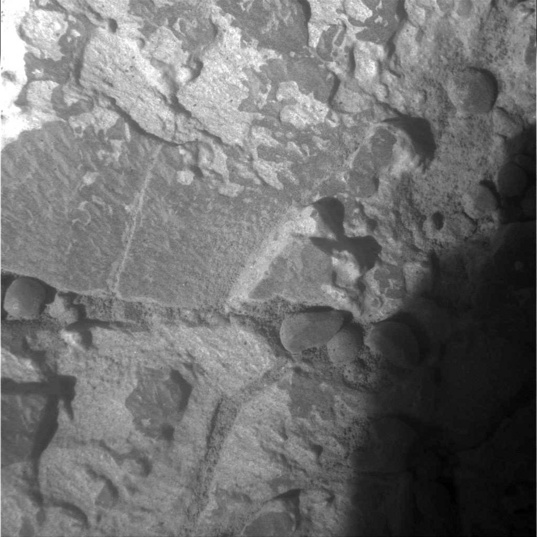