It's time to reassess Europa exploration, past, present and future. The Destination Europa! session at AGU, inspired by the eponymous website and movement, didn't take exactly that message as its theme, but it's what I got from the presentations. I can't overemphasize what an ELECTRIFYING meeting this has been for Europa exploration. Among the potentially paradigm-changing presentations were new analyses of Galileo mission data now more than a decade old.

Session co-organizer Cynthia Phillips presented 3D maps of parts of Europa's surface that Galileo cameras imaged well enough for her to apply new advanced image processing techniques. One of the results is shown below for Cilix crater, in the Argadnel region I'll talk more about later. This is exciting because a lot of questions about Europa's geology have to do the slight uplift or downdip of surface features. Dr. Phillips shared the image in her preview of the session at the NASA Europa site, which also includes teasers about all the great stuff in the session that I'm not covering. 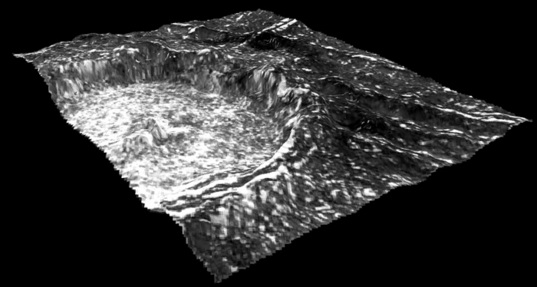 Simon Kattenhorn delivered a brilliant reassessment of Europa's geology and a strong case for plate tectonics. If Europa has plate tectonics, it would be the only place in the solar system where this happens, other than Earth. Just as on Earth, the plate tectonics paradigm could unify our understanding of Europa's diverse surface features. It also implies Europa's oxygen-rich surface material can make its way into the subsurface, providing a source of chemical energy for possible life there.

The work is a team effort by Kattenhorn and colleague Louise Prockter. They examined Argadnel Regio, one of the few places where Galileo imaged Europa's surface at regional resolution (flyby E15, better than 750 meters per pixel). The insight is simple, and one that people have puzzled over for a long time: Europa is covered with long "banded" features that look like spreading ridges in Earth's seafloor; if extension is happening all over the place, material has to be compressing elsewhere to compensate, or it has to be pushed under the surface. Earth takes care of this problem by pushing seafloor under the continents, or "subducting" them. Europa's bands widen over millions of years, as tidal flexing of Europa opens and closes cracks on Europa's surface during its 85-hour day. The widest bands are tens of kilometers wide. Some of them look like they are cut off by younger cracks (narrower cracks that lie on top of most of the other geological features), or offset by sliding of the younger crack (think of California's coast sliding northward due to slipping along the San Andreas fault). The team used ArcGIS (standard software for geological analysis) to figure out the original geology prior to sliding. They could tell from this that the older bands were missing large sections.

This is good circumstantial evidence that Europa's surface subducts in places, but Kattenhorn and Prockter take the analysis further. They note that the jumbly chaotic terrain around the apparent subduction zones looks different from destabilization chaos observed elsewhere. Kattenhorn described them as possible cryolavas that form hummocky patches that blanket the existing terrain and appear to emanate from point sources in some examples, similar to features that only occur on the overriding plates of subduction zones on Earth.

The new interpretation doesn't require plates to subduct all the way into the ocean below. Kattenhorn didn't expect them to, because Europa's surface would show a topographic signature if they did. The team predicted instead that subducting material would incorporate into the warmer ice below—"subsumption" is the term used in the talk. This is astrobiologically and geologically significant because subsumed surface material could melt when it encounters the relatively pure ice below. Melting not only makes good thermodynamic sense (sulfuric acid has a melting point around 210 K), but there is a good analogy in the dewatering of subducting plates on Earth, which helped in the formation of the Pacific range and other volcanoes. At Europa, melt formation under the ice has been linked to destabilization chaos, most recently by Destination Europa! session organizer Britney Schmidt and colleagues.

So plate tectonics seems to make a lot of sense at Europa. Maybe there will be a day when we can identify Europa's tectonic plates in a similar way to what we do on Earth. While Galileo imagery undoubtedly holds more clues to this topic, putting together a plate tectonic map calls for high resolution coverage of the remaining 90% of Europa not seen at high resolution by Galileo. This requires a new mission along the lines of the Europa Clipper. 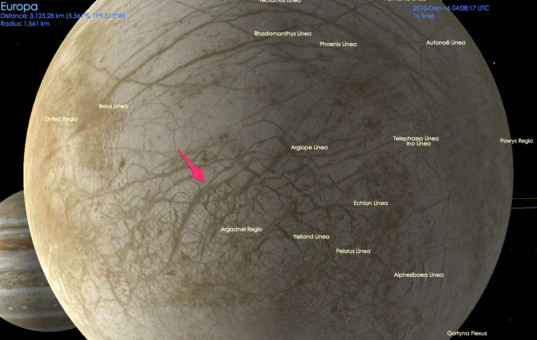 The Argadnel Regio, discussed in the plate tectonics presentation by Simon Kattenhorn, has dilational bands cut off by other features. A higher resolution image covering that region can be found here.

As I mentioned, there were many exciting results from the meeting, including the first report of impact deposited rocky material on Europa, which also comes from new results from Galileo mission data, specifically mapping of compositional spectral features in Galileo Near Infrared Mapping Spectrometer data. The impact site is about 30 km across, and left a partial ring that might indicate the impact was oblique. 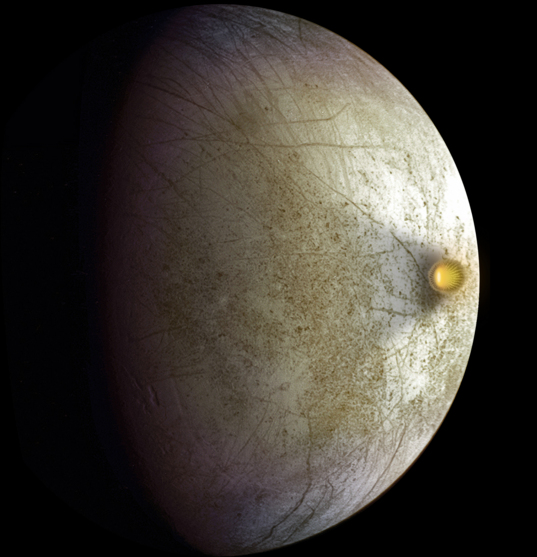 An impact on Europa appears to have left behind clay material now seen in Galileo Near Infrared Mapping spectrometer measurements.

The biggest buzz at the meeting came from news of Enceladus-like jets of water vapor at Europa's south pole, announced in a press release the day before. Co-author Kurt Retherford presented a poster about the result as part of the Friday session. As a new Hubble result, it's not in keeping with the theme of new findings from previous missions, but I can't keep myself from gushing about it (pun intended).

Europa is now looking to be geologically active in a similar way to Enceladus. This new result is both astonishing and unsurprising. Europa is HUGE by comparison with Enceladus (1561-km radius compared with 252 km), and the scale of its ocean dwarfs Earth's in both depth and volume. The inner moon Io is tidally heated to a hellish extent; tidal heating in Europa may be only a tenth of Io's, but that should still be enough to keep Europa's ice ceiling as little as 3 km thick, with up to 170 km or so of ocean under that. This thin ice shell sets the stage for plumes of the kind seen on Enceladus, emerging from cracks that open and close over Europa's 85 hour tidal cycle. So why didn't we see them before now? Europa's gravity is higher, meaning plumes should rise on average to heights of only tens of kilometers, rather than hundreds as seen on Enceladus. So even if the Galileo mission had flown as close to Europa as Cassini did to Enceladus, it probably would not have seen that kind of activity.

With all these exciting findings, it's not hard to understand why people are advocating for destination: Europa!

Europa Google hangout at AGU just before the session, with Cynthia Phillips and co-organizer Britney Schmidt 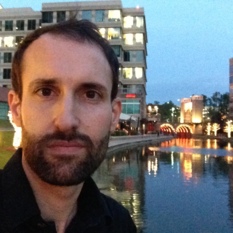 GOCE, GRAIL or GRACE are the things which scould be sent there. There must be the chance to have a thing like this radiation hard. The insight into the Europa would be much better than only taking images.

Isn't it easier to reach Europa than for example on Mars, because Europa has an orbital speed around the Sun between 0 and 26 km/s (because it has a fast orbit around Jupiter), and Voyager passed by Jupiter in about 26 km/s. A probe wouldn't need much of a landing system, it could just touch down as Europa gently tangents its trajectory! Orbiting Europa is a challenge because of the turbulent gravity field caused by the neighbouring moons. Landing might be easier! "Drilling" into Europa should also be much easier than on any rocky body. A "dipper" heated by a chemical fuel would sublimate the ices and sink down. No moving parts needed, apart from a wire reel. Sublimated gases should be useful for a gas chromatograph. Radiation is halved simply by landing, because Europa itself blocks radiation. And total protection against all radiation could be achieved by "dipping" (melting) sensitive electronics a few meters down into the ice, leaving little more than a radio dish and sensors on the exposed surface. I'm no expert, these are questions I ask. But it seems to me that Europa could be one of the easiest objects in the Solar system to explore in depth.

Sorry, Anonymous, but the outer solar system is substantially more difficult to reach and explore than Mars, Venus, or the Moon. It's far away, requiring much larger launchers, usually radioisotope power, and large radio dishes. It is a nasty, nasty magnetic and energetic particle environment, requiring bulky shielding (upping spacecraft mass and launch vehicle requirements) and making for short spacecraft lifetimes. It is hard to go from orbit around the largest planet in the solar system to orbit around a much smaller moon located quite close to it. It also requires a long-term commitment -- usually close to a decade to develop and launch, followed by close to a decade to fly there. We are capable of doing it, but it's difficult, and difficult means expensive, and we have to be willing to support that expense over many presidential administrations.

(I'm "Anonymous” above who forgot to fill in the nickname) Hi Emily! I love your blog! And your hangout participations. As a geologist, would you like to comment on my imagination that it could be easier to ”melt” a dipper into Europa than to mechanically drill into Mars? I compare with Voyager, not with tiny Juno. So with today’s standards the launcher required might be considered ”huge”. But it has been done with Voyager 2 which passed by Jupiter while accelerating from 10 to 28 km/s from the Sun. And Europa in its orbit around Jupiter has speeds of between 0 and 26 km/s from the Sun. (Wiki is my source). My question builds on that coincidence. I’m not an orbital mechanic, I can’t mend orbits when they break down on the road :). But we have already sent 1 or even 4 flyby probes there, in less than 2 years from launch to flyby, which had the same tangental speed as Europa... I mean to do it directly from Earth to Europa, no orbiting of anything inbetween. We shoot the bullet and Europa’s orbit catches it gently between its teeth. Then another idea is that exposure to radiation could be minimized my melting most of the sensitive parts down into the protective ice. The whole idea is that it LANDING WOULD BE EASIER than trying to orbit in Jupiter space with its high radiation and varying gravity.

I would love to see a drill or some sort of way to break through Europa's crust. Is there any chance of this happening, if so when? Thank You