It's been a long time since anyone paid ice giant Uranus a visit. Only one spacecraft has been there: Voyager 2 in 1986, which sped past the planet when it was oriented pole-on to the Sun.

Unlike Jupiter and Saturn with their numerous distinct cloud bands and churning storms, Uranus presented an almost featureless pale blue disk to Voyager. Processing of the images reveals a few discrete clouds, but at first appearance, the planet was disappointingly bland.

The Uranus system is, however, fascinating, as evidenced by the wealth of topics covered by the diverse group of planetary scientists who gathered to discuss it last month at the Paris Observatory. 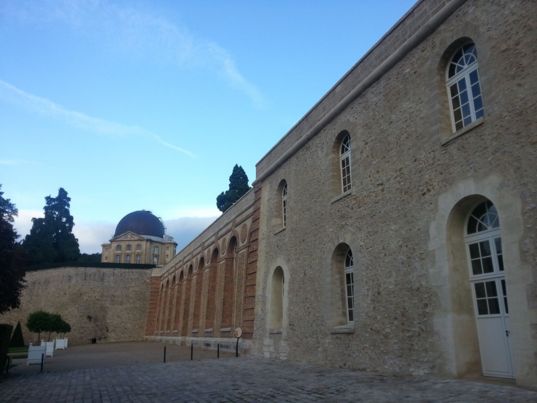 Two key things have happened since the Voyager 2 encounter to dramatically change our perception of this planet. As equinox approached in 2007, the atmosphere became more active. Second, our ability to observe Uranus from Earth, has undergone a revolution. Adaptive optics now allow numerous atmospheric features to be tracked, revealing the planet to be much more similar to Jupiter and Saturn in appearance when it's heated at lower latitudes.

The talks covered every aspect of the system, from the interior, through the deep atmosphere, to the clouds that can be observed from Earth. Pat Irwin of the University of Oxford described the atmosphere’s seasonal changes. Pre-equinox, the planet had a bright southern polar region. This faded, and post-equinox, a similar northern polar “hood” appeared and has brightened.

UC Berkley's Imke de Pater presented the dramatic difference in our views of Uranus through the use of adaptive optics. Bright, varying clouds have been observed changing over short timescales. Many clouds appear to be orographic: they seem to be linked to underlying vortices, and may show where air is rising and cooling, and methane condenses out to form clouds.

Using clever de-rotation techniques, images can be co-added to give sharp views of subtle features which would otherwise smear out when images are combined. High northern latitudes have a popcorn-like appearance: the north polar region is covered in a smattering of discrete clouds. 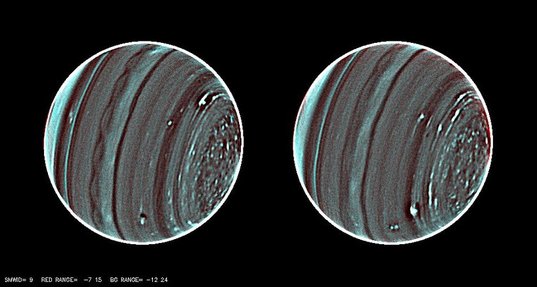 In the atmosphere's very upper reaches, the hunt is on for Uranus's complex aurora. The global magnetic fields of the planets that possess them are subtly different: Earth and Jupiter's magnetic fields are tilted slightly with respect to the planets' spin axes, whereas Saturn's is almost exactly coincident with planet's rotational pole. Uranus, and Neptune, have magnetic fields that are way off the planets' rotation axes. The cause of this is unknown, and it makes observing the aurora of these planets very challenging. The magnetic fields guide energetic particles to the magnetic poles, where they can strike the upper atmosphere causing it to glow. Whilst we see aurora on Earth at high polar latitudes, at Uranus, the magnetic poles are well separated from the spin poles. Using HST, a team led by Laurent Lamy of the Paris Observatory has detected the Uranus aurora.

Numerous other talks covered the planet's magnetosphere, rings, and moons: topics and bodies deserving of great attention themselves. Particularly perplexing in the ring system is the Mu ring, within which sits the moon Mab. As explained by Mark Showalter of the SETI Institute, in contrast to other rings of the planet, this one is blue, presumably due to it comprising very small particles.

The largest Uranian moons are similar in scale to the medium-sized icy moons of Saturn. Well under half of each large moon's surface has been imaged by Voyager 2, though as reported here in the past, some of those images showed a little more than expected, with some of the terrain illuminated by Uranus-shine.

After discussing a wealth of science results and big questions to address to understand this perplexing planet, the meeting concluded with several exciting presentations on future missions and the technologies needed to get there. Power requirements were discussed, and Richard Ambrosi of the University of Leicester reported on ESA's promising studies into the use of Americium-241 for radioisotope thermoelectric systems.

Uranus is high on the list of priorities for future exploration: the US Planetary Science Decadal Survey for 2013-2022 recommended a Uranus orbiter and atmospheric probe. Although not earmarked for selection at that time, the European Space Agency gave a proposal for an M-class Uranus Pathfinder mission a very positive assessment in 2010.

ESA is currently pondering the choice of science themes of its next two L-class missions, following a call for white papers from the science community earlier this year. The white papers included several proposals for making one of those themes the study of Uranus or Neptune. The agency will announce its decision in November, and with that decision will define the direction of the agency's largest missions to the mid-2030s.

Maybe a mission will set off for Uranus within the half-century since Voyager 2’s pioneering visit. It’s clear that many are very keen for that to happen.

Are you using amateurs at all to monitor Uranus for changes when large telescope time is not available? http://alpo-j.asahikawa-med.ac.jp/Latest/Uranus.htm

Thanks for the article and images on my favorite planet!

I voted for the U in the Decadal, and am disappointed it didn't make the cut. Most interesting planet out there, and i believe the most important science is there for magnetosphere and planetary formation.