Ted Stryk, who has been contributing guest blogs on the Lunar and Planetary Science Conference, filed this report on the poster he presented this afternoon at the meeting. His abstract (PDF format) contains more details on his processing methods. --ESL

In January of 1986, Voyager 2 zipped through the Uranian system, snapping as many photos as it could. As its trajectory was constrained by the need to continue on to Neptune, tiny Miranda, innermost of the moons known prior to Voyager, was the only moon eligible for a close flyby. Since Uranus is tilted on its side and was near summer solstice in the southern hemisphere at the time of Voyager's flyby, coverage of the planet and its moons rotated around like a spinning top viewed from above until shortly before the closest approach, at which time the angle changed, giving a vantage point looking down at the equatorial regions, with both the illuminated southern hemisphere and the darkness-enshrouded northern hemisphere presenting themselves to Voyager's cameras.

Of course, since the northern hemisphere of the planet and its moons were in the midst of a decades-long night, mentioning that they were in the spacecraft's field of view is pure trivia, since they could not be seen....or so we thought. Several years ago, Phil Stooke of the University of Western Ontario presented a paper showing that the regions beyond the day/night boundary could be faintly seen on the Uranus-facing hemisphere of the moon Ariel (the Uranian moons are tidally locked, meaning that the same face always points toward the planet, which is also why we can only see one face of our Moon, which is also tidally locked), thanks to light reflected off the planet (again, you can see a similar effect when looking at our Moon in its crescent phase, as the unlit regions can be faintly seen due to light reflected off of Earth). The purpose of Stooke's paper was to show the potential for mining hidden information from Voyager data, so he didn't delve deeply into analyzing what could be seen in individual images.

I reprocessed Voyager's best view of Ariel, a 2x2 mosaic of frames taken at a resolution of roughly 2.4 kilometers per pixel near closest approach. The terminator images were somewhat smeared, so the first order of business, after extensive calibration procedures to eliminate instrument noise, was to apply desmearing algorithms to the smeared images. I then applied extensive processing to enhance the poorly illuminated regions (I later duplicated this without desmearing the images to make sure that the features seen were not artifacts induced by this method). 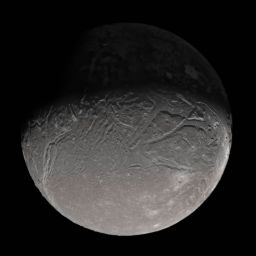 Voyager 2 captured this view of Ariel on January 1, 1986.
The result was an intriguing new view of a world which we know little about. In sun-illuminated hemisphere, on the left side of the globe in the images above, a large tectonic feature, Kachina Chasma, can be seen stretching from the day/night boundary to the limb. In the portion of the northern hemisphere seen in reflected light, Kachina can be seen to extend all the way from the day/night boundary to the opposite limb. This places it on the scale of Ithaca Chasma on Saturn's moon Tethys and other, similar features on Dione and Rhea (also Saturnian moons). Ariel is roughly the same size as Dione.

Additionally, an oval-shaped tectonic feature can be seen surrounding Kachina. Since Kachina cross-cuts it, meaning that it passes across these features uninterrupted, the oval-shaped feature must be older. It is possible that this is a large impact basin that has been modified and stretched by later geologic activity (alternatively, it may be a very old, broken-down feature that is missing one of its walls (or the wall is too degraded to show up in imagery of this quality). This oval-shaped tectonic feature, as well as the Kachina extension, were seen as foreshortened features on the limb of a more distant Voyager mosaic I reprocessed, demonstrating them to be real and not simply enhanced instrument noise. 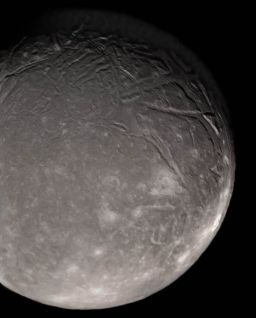 Throughout the covered region of the northern hemisphere, several smaller tectonic features and numerous impact craters can be seen. These results encouraged me to perform similar processing on the other Uranian moons. In the case of the innermost moon, Miranda, the imagery shows it at much closer to full phase than the other moons, meaning that not a lot of the night side is visible. I was able to bring out a small amount of territory north of the equator, showing a few small craters, a small tectonic feature, and an extension of Elsinore Corona, a mysterious grooved feature, but given its shape and that of other, similar features observed by Voyager, this was hardly surprising. The Miranda imagery, which can be as good as 500 meters/pixel, is remarkable to look at and very hard to mosaic together due to the pronounced effect of spacecraft motion between frames. 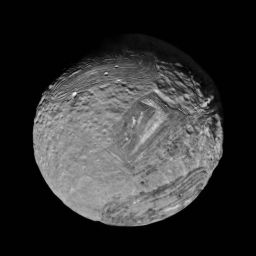 This Voyager 2 view of Miranda has been enhanced to reveal details beyond the terminator (day-night boundary), faintly lit by Uranus-shine.
Titania proved interesting. The imagery is taken from a much greater distance than that of Ariel and Miranda, and but it is very sharp, allowing one to fully take advantage of the 8.5 kilometer-per-pixel resolution. Titania is much more distant from Uranus than Ariel and Miranda, meaning that it receives much less reflected light from the planet. At a little over a thousand kilometers across, it is slightly bigger than Rhea, which is Saturn's second largest moon. From dayside Voyager imagery, Titania appears to be an older, more heavily cratered version of Ariel. Since Ariel and Titania exist in the same region of the Solar System, it is assumed that they experienced a similar rate of impacts from unlucky asteroids and comets (if anything, Ariel, which is closer to Uranus and its relatively powerful gravity, would have received a slightly higher rate of cratering). Given this, the fact that Titania is more heavily cratered indicates an older surface age. It also has a large canyon on the terminator, Messina Chasma, but it is less defined due to numerous impact craters superimposed on it. In the reflected light image, there is a faint, linear bright feature visible which lines up perfectly with Messina, indicating that it is another global-scale feature. However, given the poorer quality of this image data, the conclusion is far less certain. 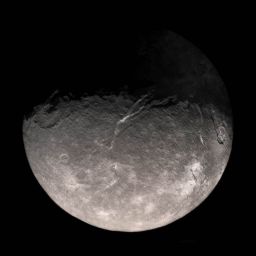 I attempted to do similar work with Umbriel and Oberon, the remaining large Uranian moons, but without much result. Voyager's coverage of these moons was much worse than that of the other three (never better than 10 kilometers per pixel for Umbriel and 12 kilometers per pixel for Oberon), as it passed nowhere near them. In the case of Umbriel, it is a very dark object, far less reflective than the other four moons, meaning that it would take much more light to make its night side visible to Voyager's cameras than for the other moons. Oberon is the outermost of the five big moons, meaning that it would receive the least amount of reflected light. Given that Titania's night side was only marginally detectable, it is no surprise that nothing can be drawn out of the Oberon images.

While the quality of the reflected light images is far below the quality of imagery we have for the sunlit sides of these moons, and all of Voyager's coverage pales in comparison to what we are seeing in the Saturnian system thanks to the Cassini mission, Voyager 2 is the only spacecraft to have visited Uranus, and no new missions are in the works. The Uranian system is so distant that not even the Hubble Space Telescope can resolve features on the planet's moons. Thus, although Uranus passed through equinox in December 2007, bringing the northern hemispheres of the planet fully into the light, pulling out new detail in old data provides our only opportunity to get a peek at what lurks in the in the unmapped regions of its fascinating moons.