Next up in my series of posts about the instruments on MSL is the Mars Descent Imager (MARDI). Once again, this camera is made by MSSS just like Mastcam and MAHLI, and it shows. Like the other two, MARDI is a color camera, and it shoots high-def 1600x1200 pixel images. 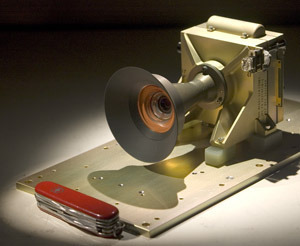 MARDI is special because it points straight down, and it can take pictures at 4.5 frames per second. That means that once the heat shield falls away during MSL's insane landing sequence, MARDI will start collecting a high-definition color video of the rest of the landing. We will be able to watch as if we were riding shotgun as MSL is lowered to the surface by its hovering sky-crane!

Of course, this is cool by itself, but it is also scientifically useful. The images from MARCI will let us bridge the gap between orbital images and photos from the surface. They can also be used to construct detailed 3D models of the landing site surface, and maybe even to extract the wind speed.

Although it only needs to work during descent, MARDI may also be able to operate while the rover is on the surface with a resolution of about 1.5 mm per pixel. This would be extremely valuable for studying the surface properties and how they change, and could be used to assemble an ongoing video of the ground rolling by for the entire rover traverse!

MARDI was cut from MSL due to funding troubles, but MSSS scraped together the funds to finish building it, and so NASA agreed to include it in the mission. MARDI was originally built for the canceled 2001 Mars Surveyor Lander, and then flew on the Phoenix lander, but due to the very slim chance that its electronics might interfere with the landing electronics, it was never used. That problem has been solved for MSL, so hopefully MARDI will finally get its chance!

As always, take a look at MSL Science Corner, the source of most of my info for this series of posts. Next time I'll move on from cameras and talk about the Alpha PArticle X-Ray Spectrometer.