Last time, I talked about the Mastcam color cameras on MSL, so it only makes sense to continue with one of the other cameras: The Mars Hand Lens Imager (MAHLI). 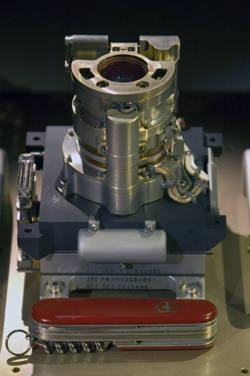 MAHLI will serve the same role on MSL that the microscopic imager on the current MER rovers does: It will provide detailed photos of the soil and rock surfaces accessible by the robotic arm. MAHLI is made by the same folks who are making MastCam (and MARDI, which I'll talk about next time) and it is similarly an impressive little camera.

First of all, just like Mastcam, MAHLI takes color images just like a consumer digital camera. One of its most impressive features is that it can focus anywhere between 2.25 cm and infinity! That means that it could take a detailed show of the soil at the rover's feet, then aim up and take a shot of the horizon, and both images would be in sharp focus. The Microscopic Imager (MI) on MER had a very limited working distance, as you may remember from when it was used to take pictures of the underside of Spirit earlier this year to determine why the rover was stuck. The resulting MI pictures were blurry and hard to interpret. With MAHLI, this sort of thing will be no problem. With MSL's long arm, MAHLI could also be used to take pictures from a higher vantage point than the camera mast!

Another very cool use of the variable focus on MAHLI is the ability to reconstruct the 3D shape of the camera's target. This is done by taking a series of photos while changing the focus. Since the computer records the distance at which the camera is focusing for each picture, the in-focus parts of all the photos can be combined to create an image that is completely in-focus regardless of range and that can be viewed in 3D. I've seen this in action on digital lab microscopes and it is awesome! 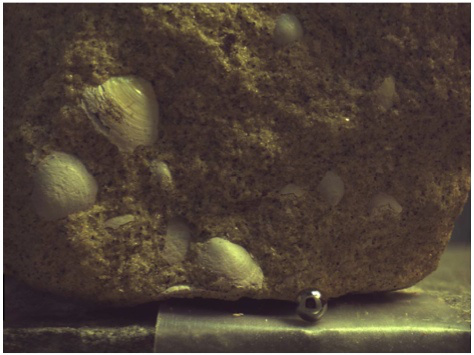 The metal ball is 2mm in diameter. The rough surface of this target is completely in-focus thanks to the stacking of 8 individual MAHLI images.

What about its resolution? Well, when focusing at 2.25 cm, MAHLI will be able to make out things as small as 14.5 microns, much smaller than the diameter of a typical human hair! Not bad!

MAHLI also comes complete with its own light sources. The lens is ringed by sets of white and ultraviolet LEDs, which will allow MSL to take pictures at night or in poor lighting conditions. The UV LEDs might even allow the detection of certain fluorescent minerals!

As you can see, MAHLI is a very nice little camera. Stay tuned, next time I'll talk about MARDI, the descent imager! As always, if you want to know more, you can check the MSL science corner site, which is where I'm getting most of my information.